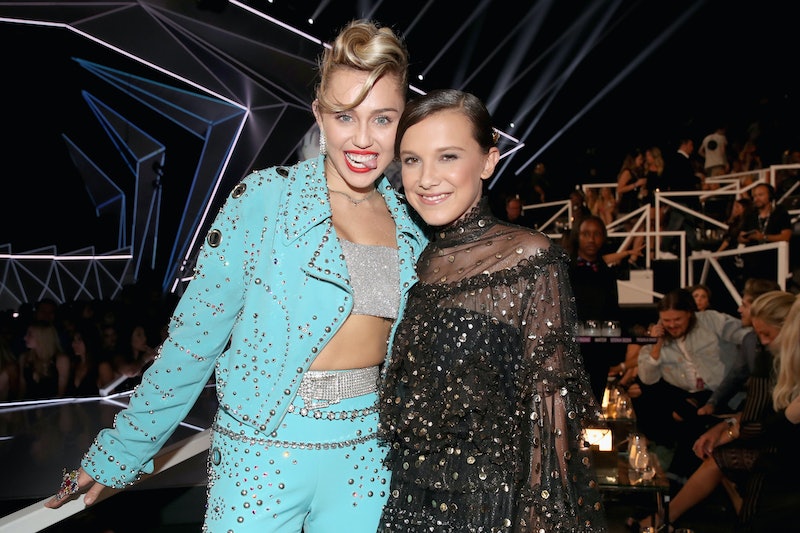 Hannah Montana's impact holds no bounds. Even Gen Z has used the classic 2006 show as their guide to love, music, and living the best of both worlds — and that includes the Upside Down. Millie Bobby Brown used Hannah Montana to learn how to speak with an American accent for her star-making role as Eleven on Stranger Things. Needless to say, Miley Stewart's training was extremely effective.

The British actor made the surprising revelation to Miley Cyrus while appearing on the March 30 episode of her Instagram Live talk show Bright Minded: Live With Miley Cyrus. "I'm surprised you don't have a country accent," Cyrus said, laughing at the reveal, as reported by E! News.

On the show, Brown admitted to Hannah Montana herself that she was obsessed with the show growing up, to the point that it made her want to act once she realized it was a real career. "I wanted your job," she told Cyrus. "I didn't know how to get your job but I was like, 'I want to be like, Hannah Montana.' And then I realized it was an actual job. And I was like, 'I want to do that. That sounds fun.' I didn't even know you could get money for it. I was like, 'I'll do it for free.'" Stranger Things producers could have saved a lot of money.

Brown was only two years old when Hannah Montana premiered in 2006, showing that the show has truly transcended generations. And this is hardly the first time that she's expressed her fandom for the show. In 2017, she told InStyle that Cyrus has grown from childhood idol to friend. “We text and FaceTime often,” she said. “She’s fabulous.”

During her appearance on Cyrus' show, Brown even admitted that she knew every move of the iconic "Hoedown Throwdown" routine as seen in Hannah Montana: The Movie. Now, it's evident what the duo needs to do next: a "Hoedown Throwdown" dance off. It's only right.