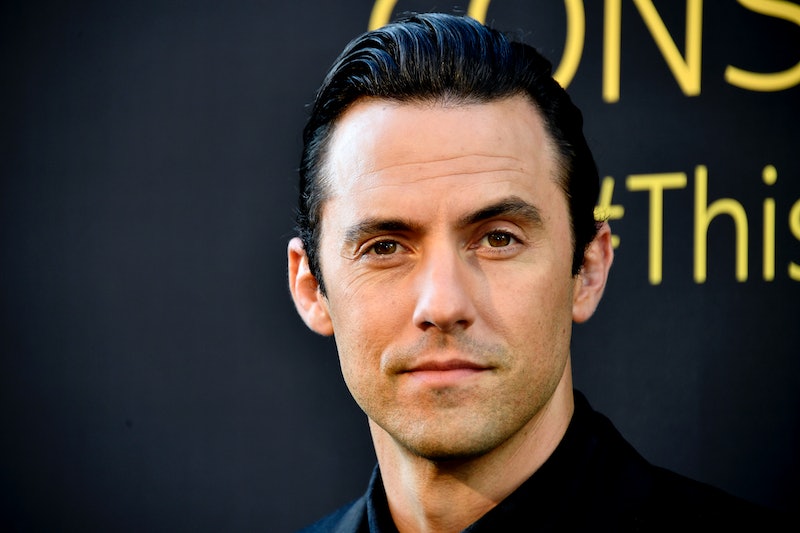 Do you ever learn a fact that just messes with your head so much? That was many Gilmore Girls and This Is Us fans on July 8, 2017 when Milo Ventimiglia turned 40 years old, and again on Emmys Sunday when Ventimiglia talked about being 40 and reminded us all over again that Jess Mariano is, like, adult AF now. The actor spoke to Giuliana Rancic during the Emmys red carpet on Sunday who asked him how he felt about turning the big 4-0. Ventimiglia said he's taking it all in stride. "It was pretty great; one of my older sisters sent me an 'over the hill' hat," he said. "So I can finally wear that and feel like I arrived into complete manhood, adulthood."

In many fans' heads, Ventimiglia will always be the teenage bad boy Jess on Gilmore Girls, but it's worth noting that the actor was actually 24 when he started playing the Stars Hollow teen. He was also 29 when he stopped playing Jess in the original series, who was supposed to be in his early 20s at the time. But, Ventimiglia just has one of those faces that worked to play a teen in the early 2000s on Gilmore Girls and works now to play a young dad on This Is Us — and somehow he still doesn't actually seem 40? Not that aging is bad, of course, but it'll just make GG fans feel old AF to remember that he was once such a young'un, and he's come so far since then. (Even though he wasn't playing his actual age back then anyway.) Do you ever get weirded out that 2000 was 17 years ago? Same.

Anyway, Ventimiglia, because he is the best, was super humble about being 40 and just talked at the Emmys about how excited he is to keep learning new stuff. When Rancic asked him the biggest lesson he's learned in his four decades on earth (again, what?) he replied, "I think I'm old enough to know I'm not young enough to think I know everything." It's pretty much the anti-Jess answer, which proves just how grown up he truly is. Ventimiglia continued, saying he no longer has an attitude of "I know everything," but now, when he doesn't know something, he admits it and tries to learn. "There's always something to learn," he noted.

With age comes wisdom, and his This Is Us co-stars treat him accordingly. Ventimiglia said the cast calls him "Papa Bear" or "Papa Pearson" on set, which is really just too adorable. It's honestly just a shame that Ventimiglia isn't a dad IRL yet, because he's such a good one on the show (which obviously means he will be in real life, duh). But, even if the actor did have kids, fans would probably still be weirded out to hear that he's actually aging and not still just a teenage heartthrob. Where does the time go? Fans can't believe it.

Ventimiglia's milestone birthday didn't go unnoticed by fans or his fellow actors, and Mandy Moore took to Twitter to celebrate her on screen husband on his special day. It's too bad Moore just got engaged to her boyfriend Taylor Goldsmith, because Moore and Ventimiglia would make one adorable couple on screen and off. But, I will take their friendship at the very least.

So, Ventimiglia may not be our young, no-so-sweet, leather jacket-clad Jess any longer, but now he's Jack Pearson, best dad ever — which is honestly just as good. Besides, any and all Milo is good Milo and he's definitely aging like fine, fine wine.

More like this
Hugh Jackman & Deborra-Lee Furness’ Relationship Timeline Started With A Mutual Crush
By Hugh McIntyre
The EGOT Winners List: Only These 17 Artists Have Ever Reached EGOT Status
By Radhika Menon and Marina Watts
Jennifer Hudson Becomes An EGOT Winner At The 2022 Tony Awards
By Jake Viswanath
Jennifer Aniston Is Still Wearing That 'Friends' Dress She Stole From Monica's Closet
By Jake Viswanath
Get Even More From Bustle — Sign Up For The Newsletter