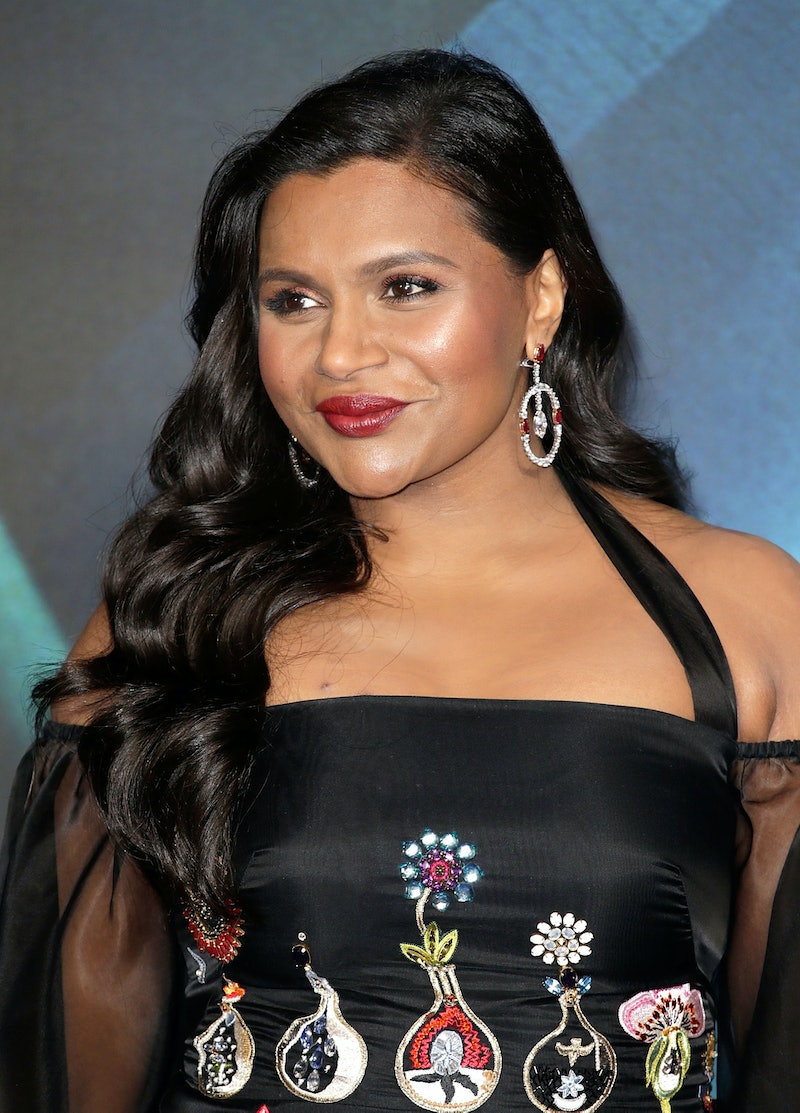 Mindy Kaling has come a long way since she started writing for The Office and appearing as Kelly Kapoor in 2004, but even that first major job was ground-breaking. From being the only woman of color in the writer’s room on the NBC sitcom to now writing, producing, and starring in her own film Late Night, Kaling is one of the most successful women of color in Hollywood today, and she’s making it her mission to help others climb the ladder. In a new interview with Variety ahead of the premiere of her film at the 2019 Sundance Film Festival, Mindy Kaling said what every woman of color knows about success — it’s not just about hard work and talent, but about people who came before you giving you opportunities.

Kaling has lived the struggles of being a writer and actor of color in Hollywood, and she knows the keys to success are not only within, but from getting a helping hand. “For many years, I thought that hard work was the only way you could succeed, but it’s simply not true," the 39-year old multi-hyphenate told Variety. "Particularly if you’re a woman of color, you need people to give you opportunities, because otherwise it won't happen. Talent is an important part of success, but you also need mentors to find promise in people that don’t necessarily seem like they will fit in.” In other words, someone needs to see you and lend you a helping hand. Talent and hard work will only get you so far, and that's the reality.

It might sound a little bleak, but not for Kaling, who is now in a position to create opportunities for others. For instance, she made sure she had a diverse writers' room on her show The Mindy Project and, for Late Night, she hired Indian-Canadian director Nisha Ganatra to direct after working with her on The Mindy Project. "I knew all about the power of holding the door open behind you instead of slamming it shut and saying, ‘Thank God I got in,’” Ganatra told Variety.

It's easy to say that talent will get you where you deserve to go in life, but that's not actually the case, and the shockingly small number of women of color behind the camera in Hollywood reflects that. According to the most recent report from the Annenberg Inclusion Initiative helmed by Professor Stacy L. Smith, 'The lack of inclusion on screen is matched and exceeded by the exclusion behind the camera. Across 1,223 directors over 11 years, 4.3 percent were female, 5.2 percent were Black or African-American and 3.1 percent were Asian or Asian-American."

Writers' rooms statistics are just as embarrassing when it comes to diversity. A study titled "Race In The Writers' Room" from Darnell Hunt, Dean of Social Sciences at UCLA, showed that across all original, scripted comedies and dramas that aired in 2016-2017, only 8.9 percent of writers in the room were non-black people of color, while only 4.8 percent were black.

That's why it's more crucial than ever for those who do make it to strategize and help out their own to break into the industry. People of color need those boosts more than anyone. If the industry is going to stay stubbornly white, why try pleading with white gatekeepers instead of helping each other out? That's the kind of career Kaling is building now that she has so much power and name recognition in Hollywood. She knows what other women of color knows: good work needs to be recognized before it can become success. And it's up to all of us to pay it forward.