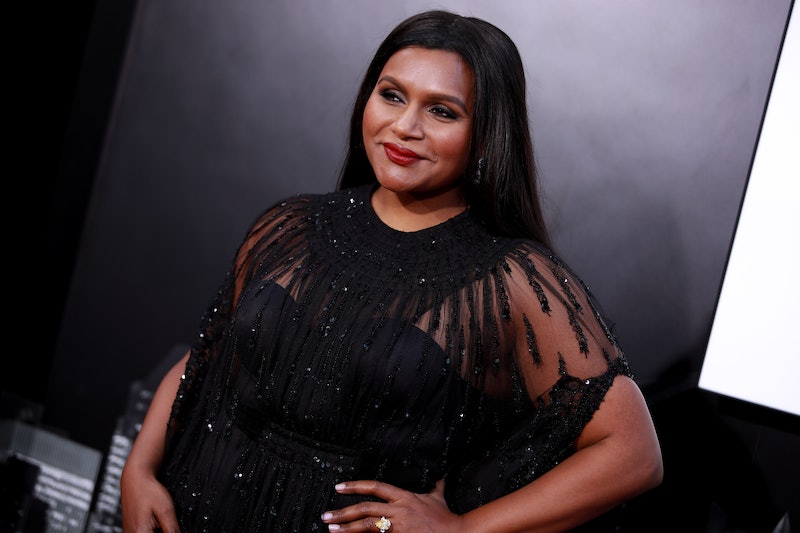 She's got an 18-month-old daughter, a new movie coming out later this week, and tons of other projects in the works. Time for a break? Yeah, right. While speaking to Glamour for a recent interview, Mindy Kaling's comments about balancing motherhood and her career prove that she doesn't plan on slowing down any time soon. Her comments also prove that she can pretty much do it all, and she's an actual expert at multi-tasking.

Kaling's list of accomplishments is seemingly never-ending. Also never-ending? The list of things she still wants to do. When asked by Jessica Radloff of Glamour if she "might want to ease up on the gas pedal a bit" as she approaches a milestone decade — Kaling turns 40 on June 24 — her answer was, in short, nope.

"My ambition and the things I want to do have always been about the same. I haven’t found that I’m working less, because it’s all just based on an idea of what I want to do ... It’s just about the ideas that I have at that time. I usually want to be working on three different TV or film projects while writing something, like a book of essays. That hasn’t changed so much, the amount of what I want to do. I think it eventually will."

Kaling then went on to admit that, "in a couple of years, I probably won’t want to do quite so many things at once, but right now I still find the work energy giving, not energy depleting." So, basically, while hustling and juggling so many projects at once like that would definitely burn a lot of people out, Kaling's creativity just adds fuel to her professional fire. Must be nice, right?

She's also super lucky in that her daughter, Katherine, is really into snoozing right now, so while she's asleep, Kaling can work. "My baby is so little and takes such long naps," she told Glamour. "She sleeps more than half the day, so I’ve found it to not be too much of a deterrent. Plus, I’m privileged enough to have child care."

Somehow, Kaling also manages to squeeze in having a social life, too, but she's not really into the high-profile Hollywood shindig scene. "People may be surprised to hear this, but I think I do have a little social anxiety," she revealed to the outlet. "Going to parties where I don’t know most of the people is stressful to me."

Instead, she said that she prefers to just invite a small group of people over to her house, "because I’m close enough with them that I don’t feel the fear that this person wants to escape this conversation," she said with a laugh. Totally understandable and way more comfortable — literally and figuratively. Comfy pants and a couch over standing in stilettos any day of the week, amirite?

Kaling clearly knows what she's doing, and it's seriously impressive. She makes it all look so easy, even though achieving her level of success is anything but. Can I be her when I grow up?