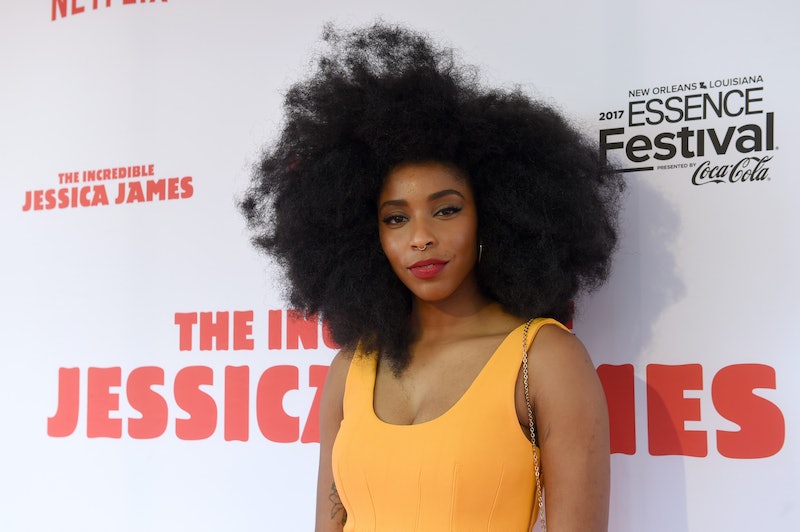 In her quest to reinvent the romantic comedy for the modern era, Mindy Kaling has turned to one of the "dopest" women in Hollywood to give her new project an added cool factor. Kaling's Four Weddings and A Funeral cast Jessica Williams, co-host of the 2 Dope Queens comedy podcast and former Daily Show correspondent, in the leading role.

Kaling is adapting from the classic '90s rom com for Hulu as a limited series, according to Entertainment Weekly. But rather than a straightforward remake of the film, which starred Hugh Grant and Andie MacDowell, Kaling's series will introduce a brand new group of confused twenty-somethings, who find their lives intersecting at the five titular events.

Williams will play Jess, who is described in a press release obtained by Bustle as a "young communications director for a New York senatorial campaign, [who] receives a wedding invitation from her college schoolmate now living in London." Jess hops on a flight across the pond to reconnect with her friends, only to "end up in the midst of their personal crises." The description continues:

"Relationships are forged and broken, political scandals exposed, London social life lampooned, love affairs ignited and doused, and of course there are four weddings… and a funeral."

Four Weddings and A Funeral will mark the first time that Williams will star in a scripted television series, though she does have some experience as a rom com heroine. In 2017, she starred in the feminist Sundance favorite The Incredible Jessica James. She played a twenty-something writer named Jessica who is on a quest to find love and meaning in her life.

And if there's one thing that fans learned from her turn in The Incredible Jessica James, it's that Williams will probably bring a new twist to the traditional rom com heroine. After all, the 2 Dope Queens host doesn't subscribe to the traditional film belief that the women at the center of rom coms are in need of a man to complete them.

"She’s like pretty externally confident, where’s she’s like, 'Yeah! I’m f*cking fine,'" Williams told Bustle in 2017 about her character in The Incredible Jessica James. "[Jessica] doesn’t necessarily need validation and I think sometimes, like in other traditional rom-coms, it's like there’s like some sort of hole that she needs to be filled. And I don’t think there’s necessarily a hole externally that she needs filled, except her vagina."

And though Kaling has often spoken about her love of "traditional" romantic comedies like When Harry Met Sally, she's made a career of upending the rom com tropes in order to make them more interesting and inclusive for the modern age. One way that the Mindy Project creator has been planning to reinvent Four Weddings and a Funeral for her Hulu series has been by casting a diverse group of actors. “I’m talking Pakistani people, I’m talking black people, I’m talking a couple old people, but not too many. And don’t worry everyone, there will still be plenty of white people," Kaling said at the Hulu upfront event back in May.

By casting Williams, Kaling has already managed to make good on her promise of a brand new, exciting take on the '90s classic. With a badass, feminist actress of color in the leading role, fans don't necessarily have to wait to see Kaling's version of Four Weddings and A Funeral in order to know that it will be a fun, female-centric update to a story that people have loved for decades.