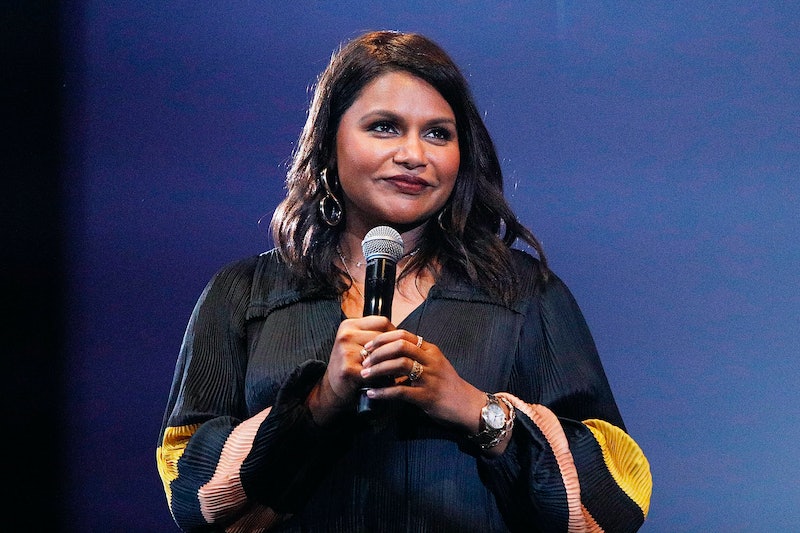 A Tuesday press release from Amazon Publishing imprint Amazon Original Stories announced that Mindy Kaling's new essay collection is coming out in Summer 2020 — and Prime and Kindle Unlimited subscribers will be able to read it for free. Kaling's new, as-yet-untitled essay collection will be available as an eBook and eAudiobook, narrated by the author.

Mindy Kaling's new essay collection won't be her first. The TV star, writer, and producer, who has appeared in a number of blockbuster films, including A Wrinkle in Time and Ocean's 8, previously published two essay collections — Is Everyone Hanging Out Without Me? (And Other Concerns) and Why Not Me? — in 2011 and 2015, respectively. In her new collection from Amazon Original Stories, Kaling "shares her charming and intimate reflections on life changes — big and small — from the past few years," according to the press release, which means that Mindy Kaling superfans might just get to read about the joys of parenting her daughter, Katherine, who was born in 2017.

The book is also not a first for Amazon Original Stories. Launched in 2017, the Amazon Publishing imprint has brought several works of short fiction and essays to Prime and Kindle Unlimited subscribers. These include the Kindle Singles "Bush" by Janice Y. K. Lee (The Expatriates) and "My Boy, Their Son" by Mariah MacCarthy (Squad), as well as the Bloodlands, Dark Corners, and Warmer collections. A new, six-part collection, titled Forward, is coming this September, and will include stories from Blake Crouch (Dark Matter), N.K. Jemisin (How Long 'til Black Future Month?), Veronica Roth (Carve the Mark), Amor Towles (A Gentleman in Moscow), Paul Tremblay (The Cabin at the End of the World), and Andy Weir (Artemis). Amazon Original Stories publications may be read for free by Prime and Kindle Unlimited subscribers, and may be purchased for $1.99 each by non-subscribers.

In the press release, Kaling expressed enthusiasm over her new book. "It's so exciting for me to share the secrets of how I balance being a professional writer, actor, and single mom in a new collection of essays," Kaling said. "I mean, it would be so exciting to share those secrets. I don’t have them. Like, not even close. This morning I bribed my baby with a remote control to get my car keys back. But I do have funny stories about my life and I can’t wait for you to read them."