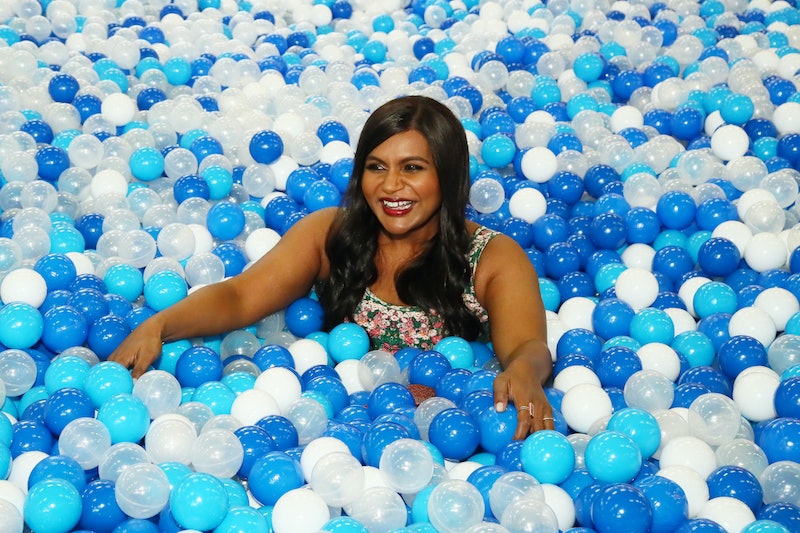 Mindy Kaling has kept her daughter Katherine out of the spotlight, but no matter how famous you are, Thanksgiving is a time for family, and the social media posts keep us gushing over cute baby photos and thoughtful messages of gratitude. Kaling's Thanksgiving post with her daughter matching is the cutest thing ever.

After some holiday and fall-related memes earlier in the week, the writer/actor took to Instagram to post a sweet selfie (kind of) with her daughter Katherine, who was born last December. In the post, Kaling and her eleven month old are cuddling on the carpet and #twinning hard. Kaling's photo is accompanied by this caption and a couple of heart emojis, short and simple:

Thankful for her. Happy Thanksgiving.

How stupid cute is that? Plus, the matching pink Chuck Taylors? Superfans may remember that in Kaling's book Is Everyone Hanging Out Without Me (And Other Concerns) she proclaimed that all a guy needs to be hot is a peacoat and a pair of Chuck Taylors. She's clearly an aficionado, and while there's probably no secret single mom "sisters are doing it for themselves" message behind the shoe choice, it's beyond adorable to see Mindy and Katherine rocking this look.

“I’m really lucky because I get to create my own job opportunities," Kaling said in a recent interview with PEOPLE. "Because I do that, I can fit my daughter into my job. It’s a luxury most American women don’t have. It’s one of the nice things of having had my baby a little bit later in my career. I can be like, ‘Hey, I want a little area that I can have my daughter play because I want to check up on her at work.’ That is probably the biggest perk of my life: to involve my daughter so much in my career."

Right now, that career includes an exciting Hulu adaptation of Four Weddings and a Funeral, which just announced that Andie MacDowell will join the cast lead now by Game of Thrones star Nathalie Emmanuel instead of the previously announced Jessica Willias.

This is not the first time that Kaling has posted pictures of baby clothes, or her blinged out (do people still say blinged out) baby stroller on Instagram — but this is only the second photo of Katherine that Kaling has shared with the general public.

The first photo was of the two of them on Halloween. They're not exactly matching, unless you guys know a story about a lion and bottle of mustard that I don't, but it's still adorable.

The Halloween post also doesn't show baby Katherine's face — which may become more and more of a trend for celebrity parents. Sure, mother and daughter have been spotted out and about, but there aren't a lot of pictures and as far as the content she's putting out there, her daughter's identity is protected. Lin-Manuel Miranda, for example, goes to comic measures to block his kids' faces out of social posts. It's a nice way for famous folk to share their family memories without over-sharing or exposing their kids to the world... or giving them a social media presence before they even have teeth.

By posting pictures like this, Kaling is able to share her thanks and happiness with others, and still have a quiet Thanksgiving at home with her family. Isn't that what we all want? It's about as perfect as those precious pink kicks.