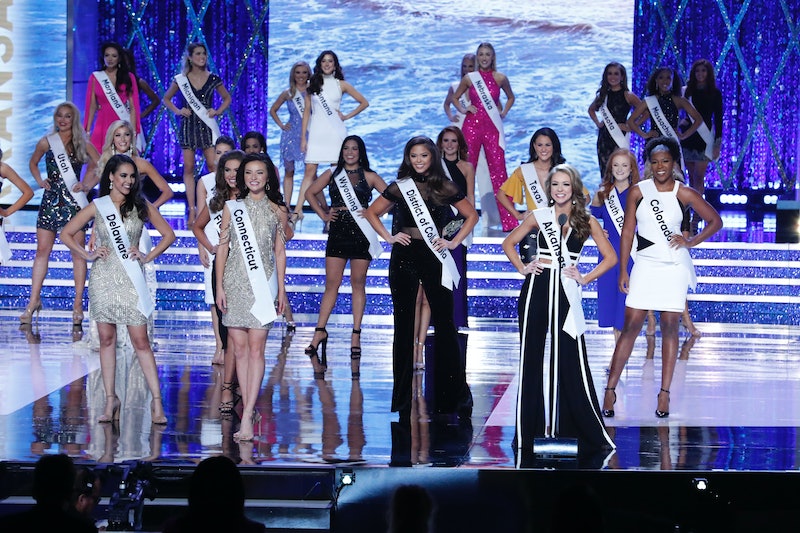 The Miss America 2019 pageant aired on Sunday, Sept. 9 on ABC, in a flurry of sequins, chiffon, and perfectly coiffed hair. The event was hosted by Carrie Ann Inaba and held in Atlantic City, New Jersey. But while many things about the competition remained the same, there is one major change: This is the first year without a swimsuit portion of the program. And while this could be seen as a step forward, as the women aren't being judged on their bodies, some Miss America fans were displeased by the new format.

Per The Washington Post, the new Miss America chairman, Gretchen Carlson, announced that they would eliminate the swimwear competition back in June. According the Miss America website, they're referring to this as Miss America 2.0. "Starting this year, candidates will no longer be judged on outward appearance," the site said. "The choice of wardrobe is now open so everyone can express their own very individual style. But more importantly, their voices will be heard. Throughout the competition, candidates will have opportunities to advocate for their social initiatives."

So, what replaced the swimwear and evening wear portions of the program? The contestants participated in a red carpet, where they strutted down the stage (still in evening wear). After they arrived at the end of the carpet, the women were given an opportunity to speak their minds, as prompted by the Miss America co-host, Ross Mathews. And while the intentions were good, it came off as a bit awkward. Mathews would hold the mics up to the women and ask questions like, "What's on your mind tonight?" That being said, this is the competition's first year implementing this new addition, so they may need to work out a few kinks. However, many of the viewers weren't pleased that there were no swimsuits and thought the substitute was boring.

That being said, not everyone was displeased by the lack of swimwear. "There’s something to be said about not having to think about walking across a stage in a bikini," Leah Summers, the executive director of the Miss West Virginia Scholarship Organization, told The New York Times. What's more, Mallory Hagan, Miss America 2013, told InStyle that eliminating the swimsuit competition is a step forward.

"We have no shortage of Instagram models and health and wellness models out there who put their bodies on display, but we don’t have plenty of young, motivated, service-minded young women in the public eye to look up to," she said. "That is the void Miss Americas have been filling for years, and the job description isn’t changing, but now we are able to show the public what it is we’ve been doing all this time."

However, the event was more than just red carpet questionnaires. The competition, which ultimately went to Nia Franklin from New York, showcased the women's passions and allowed them to advocate for their areas of expertise. Nina Forest, for example, was the first Asian-American to win Miss Idaho.

Although it wasn't the most eventful competition, Miss America proved to be a sophisticated event with poised young women — whether they wore bikinis or not.