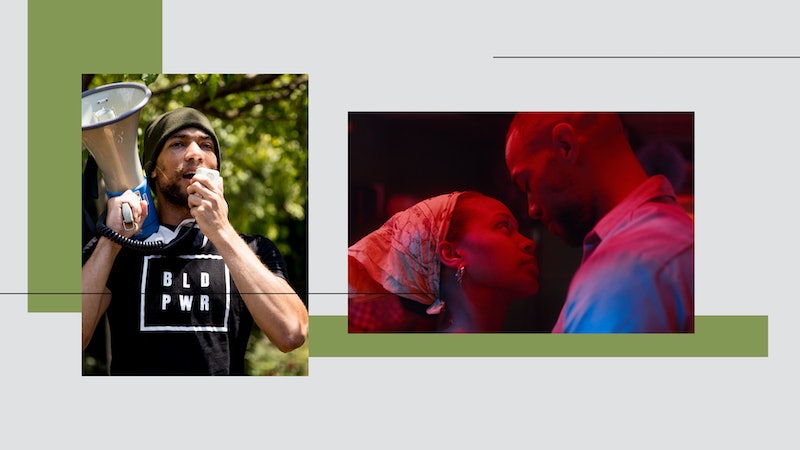 Juneteenth is Kendrick Sampson's favorite holiday. "[The holiday] is always going to be about the food. Corn bread, crab boils, gumbo, and all the goodness. My mouth is watering right now," Sampson tells Bustle. At the same time, he recognizes that the celebration was born out of tragedy. "Juneteenth is [about] delayed freedom. Three years after the Emancipation Proclamation, slaves 30 minutes from where I grew up found out that they were free," he says. "That is a tragic thing."

Sampson's latest film, Miss Juneteenth (available now on VOD and Digital), is a celebration of this bittersweet holiday. The movie centers on Turquoise Jones, a struggling single mother and former Miss Juneteenth pageant winner. Sampson plays Ronnie, Jones' on-again-off-again love interest and father to her daughter, Kai. While the film had long been slated for release on Juneteenth, as the country protests to end the police brutality practices that killed George Floyd and Breonna Taylor, there's been a heightened interest in the holiday — with companies like Google, Nike, and Target (and yes, Bustle) now giving employees the day off. This newfound support for Juneteenth is once again leaving Sampson with conflicting emotions.

"What's happening with Juneteenth is a lot of corporate and white guilt. [Companies] allowing us to celebrate Juneteenth is still having to be 'allowed' to do that. That's not real liberation," he says. "At the same time, I'm glad that Juneteenth is getting recognized. People have been fighting for it to be a national holiday for a very long time. So, let's do it."

The fight for liberation is core to Sampson's identity. While audiences have come to know him from his work on Insecure, How to Get Away with Murder, and The Vampire Diaries, Sampson is as much an activist as an actor. He's been involved with Black Lives Matter LA since 2015, has traveled to Standing Rock to protest police brutality, and is also an advocate for environmental racism. And in the wake of Floyd's murder, Sampson has been on the front lines more than ever, co-organizing a demonstration at Pan Pacific Park in Los Angeles with his BLD PWR initiative and Black Lives Matter LA.

"Thousands of people came out. It was one of the most healing experiences that we've ever had," Sampson says of the protest. But the peace he experienced was short-lived. "Then the police showed up as we were leaving. I was shot with seven rubber bullets and jumped by police. My assistant was jumped by police as he tried to pull me out. My buddy fractured bones in his skull."

Though Sampson was hit in the leg and chest, ripping off layers of his skin, the incident has only further intensified his desire to defund the police. "The next day there were more people, and then the next day there were even more people, and we continued to organize demonstrations," he says. "Last Sunday, there were 100,000 folks out in Hollywood and you couldn't see the end of the crowd. It was a sign, we're not settling. You can't scare us back into our homes. We are going to move forward and we are going to win."

And as for this year's Juneteenth? Sampson would like to see it be "a day action, a day of liberation, and one of joy, mourning, grieving, and healing." A fitting tribute to the holiday in all of its many dimensions.

More like this
Nothing Says Christmas Like An Amnesia Plotline
By Madeleine Aggeler
How To Stream 'White Noise' On Netflix
By Grace Wehniainen
You Can Finally Stream 'Ticket To Paradise' At Home
By Chloe Foussianes
The 'Love, Lizzo' Harry Styles Scene Is Just 1 Moment That Made Fans Feel Seen
By Brad Witter
Get Even More From Bustle — Sign Up For The Newsletter