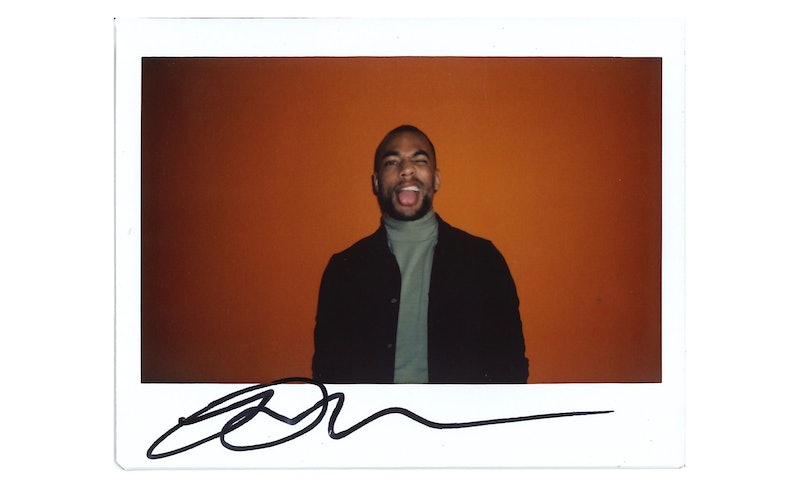 When celebrities hang out with Bustle editors, we want to give them the chance to leave their mark. Literally. So we hand them a pen, a piece of paper, a few questions, and ask them to get creative. The rest is up to them. This time, Insecure star Kendrick Sampson is leaving his mark in the Bustle Booth.

It's hard to imagine anyone not texting Kendrick Sampson back, but when we meet at Bustle's offices, he says that when he found out his character Nathan would ghost Issa on Insecure, he was as upset about it as many viewers were.

"To be honest, I didn’t even really realize that it was my character [when I read the script] because I was sitting there relating to everything that Issa was going through," he says. "It was frustrating. I f*cking hate it when people ghost on me."

He assures me he understands Issa's emotional downward spiral. "It was so vulnerable — everyone’s been there, like, halfway in the shower and halfway looking at their phone, waiting for it to light up, making sure that it’s on, and the volume’s up. And then your mom calls."

"Ghosting is my pet peeve," he continues, reaching down to reapply a band-aid to a blister on his ankle. He'd spent all day on his feet in new boots at the United Nations' #WeDay, celebrating young leaders alongside New York congressional candidate Alexandria Ocasio Cortez. He's headed to Texas just after our talk, too, to do some voter registration and campaign for both Beto O'Rourke and Andrew Gillum, two progressive candidates vying for congressional seats in November.

Mixing politics with the pleasure of being a star on the rise comes naturally to Sampson, though he notes that his activism has evolved over the years, calling the deaths of Mike Brown and Eric Garner a turning point for him. Until his time on How To Get Away With Murder in 2015, he says his activism was more about trying to "not be the 'angry black man.'"

"It was all subtle. Then I figured, I don't give a f*ck anymore, because I am angry and I am black," Sampson says. He recounts his own experience of existing while black in this country. "I’ve been pulled out of my car at gunpoint and it could have gone left at any point... and I didn’t even grow up in the “hood,” you know?" If you don't know how it feels, but know that it's wrong, he says, then you have to speak up anyway, even if doesn't feel "easy."

"This is how we do it. This is how I stand up for women, how I stand up for the trans community, I am not a trans person, I might make mistakes about [speaking to their experience]. I am not a Muslim person, no matter how much I study it, I didn’t live it, I will not live it, so I am going to have to make mistakes and learn from those mistakes and then teach other people how not to make those same mistakes," he says. "This is what being an ally is."

Activism is a "way of life," he adds, and he most definitely practices what he preaches. Luckily, having a little fun talking about Insecure and filling out our Bustle Booth was also on the agenda in between pounding the pavement for candidates ahead of the midterm elections. Check out his answers below.

More like this
On 'The Handmaid’s Tale,' Christine Ko Fights Back
By Gretchen Smail
Ismael Cruz Córdova Loves His Elf Ears
By Morgan Leigh Davies
Is The Serpent Queen Based On A True Story?
By Maxine Harrison
Pro Footballer Zander Murray Is "Blown Away" By Support After Coming Out
By Sam Ramsden
Get Even More From Bustle — Sign Up For The Newsletter