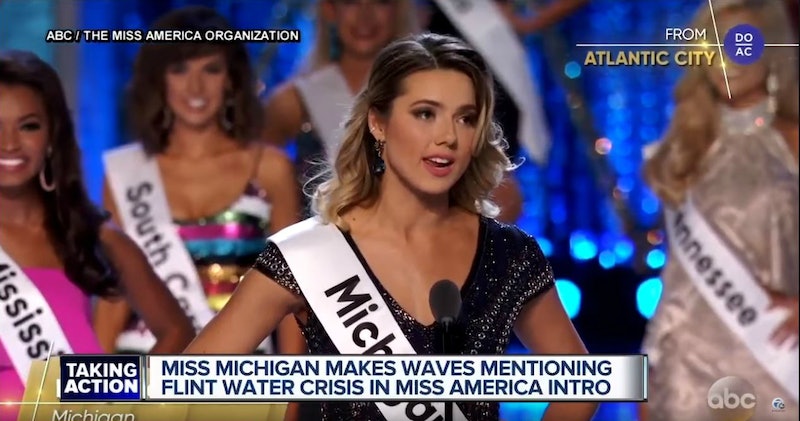 Emily Sioma, AKA Miss Michigan, only had a few precious seconds of airtime to introduce herself during Sept. 9's Miss America Pageant, but, wow, did she use it. She could have talked about her achievements, as many of the contestants typically do, but Miss Michigan’s comments about Flint at the Miss America Pageant was all the introduction she needed. According to CNN, Sioma said, “From the state with 84 percent of the U.S. fresh water but none for its residents to drink, I am Miss Michigan, Emily Sioma.” Boom. Mic drop.

With a viewership of 5.6 million people, according to Statista, the Miss America Pageant provided a captive audience for Miss Michiga to remind the world that Flint, Michigan, has been experiencing a deadly water crisis since 2014, BBC News reports. Nearly 100,000 residents have been exposed to high levels of lead in their water, says BBC News, and 12 deaths have been attributed to water contamination. Four years after the crisis first began, Flint residents, who are majority low-income people of color, are still advised to only drink filtered or bottled water until full replacement of the pipes can be completed in 2020, BBC News reports.

According to the BBC, Miss Michigan did not make it in to the top 15 of the competition, but her comments about Flint seem to have resonated with the public, even with people who may not have otherwise tuned into the Miss America Pageant. Many people thought her comments were a powerful and courageous use of the Miss America platform to peacefully protest an issue that is affecting a large community.

“I'm still shook off #MissMichigan,” said Twitter user @teannaleigh12. “She protested at her choice of time and place when others probably will say she was out of line or disrespectful. Sound familiar?! Protests cannot be controlled and diminished just because you're uncomfortable! That's the point!! #missamerica.”

"#MissMichigan You have my vote for not talking yourself up, but rather bringing up a persistent issue in your home state. #MissUsa @MissUSA,” said Twitter user @1UnicornHarley.

This is a big moment for the Miss America Pageant, which has faced criticism in the past for objectifying women's bodies since its inception in 1921. In fact, this is the first year the pageant didn't hold its iconic bathing suit and evening gown portions of the competition, opting instead for time for the contestants to share with the judges their achievements and goals, The New York Times reports. Miss Michigan took that a step further, using the new platform to peacefully protest an issue the rest of the nation has all but forgotten amidst the latest news cycles inundating their feeds day after day.

But not all reactions to Sioma's protest were positive. Some people took to social media to voice their concerns that Sioma was participating in performative social justice by mentioning the Flint water crisis without a clear call to action. Sioma is a self-described activist, however, whose platform is to advocate for survivors of sexual assault like herself, according to her social media presence.

Overall, social media was flooded with positive reactions praising Miss Michigan for using her few seconds at the mic to remind the world that there are more important issues at stake than where she went to school or what volunteer work she's done. Sioma showed the world that you can make a powerful impact in just a few, precious seconds.