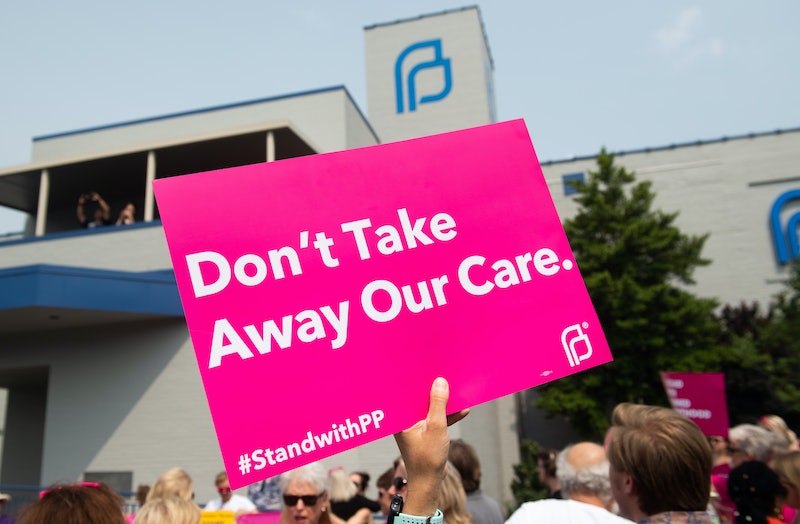 Abortion bans aren't the only way states are trying to stop pregnant people from accessing the procedure — some are using an onslaught of regulations to force abortion providers to close their doors, or stop providing the essential health care service. In Missouri this week, this regulatory fight is the subject of a hearing that will determine the fate of the state's last abortion clinic, Reproductive Health Services of Planned Parenthood of the St. Louis Region.

Missouri's Department of Health and Senior Services has refused to renew the license for its last abortion provider for allegedly failing to meet regulatory standards that advocates call TRAP laws, or targeted regulation of abortion providers. Planned Parenthood says it has met the standards, which are considered medically unnecessary. The case to renew the clinic's license is now being heard by Missouri's Administrative Hearing Commission — and if the commission rules in favor of the state, Missouri could be the first state in the country with no legal abortion clinics.

Bonyen Lee-Gilmore, Planned Parenthood's director of state media campaigns, tells Bustle that the state's motives behind withholding its license and imposing other regulations are to make safe, legal abortion in Missouri inaccessible.

"TRAP laws are essentially a tool to ban abortion without ever having to overturn Roe v. Wade through the Supreme Court," Lee-Gilmore says. "And the whole reason why we're even having a licensing fight is because of these medically unnecessary restrictions that regulate abortion providers like ambulatory surgical centers."

Dr. David Eisenberg, one of the St. Louis clinic's providers, who has been providing abortions for 16 years, tells Bustle that the Missouri department of health "seems to be weaponizing the regulatory process to try to eliminate access to abortion care in the state of Missouri."

Since about 2012, anti-choice advocates and politicians have used TRAP laws as a way to make it harder for abortion providers to exist. In 2016, after a TRAP law in Texas closed 20 of the state's 41 abortion clinics, the Supreme Court ruled that two of the provisions in the law placed "a substantial obstacle in the path of women seeking an abortion, constitute an undue burden on abortion access, and therefore violate the Constitution."

Despite this, states are still passing and enforcing unnecessary regulations on clinics. A TRAP law in Louisiana almost identical to Texas' will go before the Supreme Court again in the next few months, and the outcome could affect whether licensing restrictions and TRAP regulations like those in Missouri are allowed to stand.

In the meantime, though, advocates are sounding the alarm about this hearing, the outcome of which could force Missourians to leave the state to seek comprehensive reproductive health care.

The Background On The Case

Missouri's Administrative Hearing Commission started hearing Planned Parenthood's case on Oct. 28 and is expected to conclude Nov. 1, though a ruling likely won't come until February, according to NBC News.

The conflict between the state health department and Reproductive Health Services of Planned Parenthood of the St. Louis Region started in June 2019, when the state said it wouldn't be renewing the clinic's license due to a March inspection that found “at least one incident in which patient safety was gravely compromised," according to the Associated Press. The state also cited four cases where patients had "failed abortions" and had to return to the clinic for additional procedures, according to NBC News. These were out of the 4,000 abortions the clinic provides every year, according to Planned Parenthood's attorney, who said during the hearing Oct. 28 that the state "cherry-picked" the cases where the clinic didn't file a complication report, the Kansas City Star reported.

The clinic made changes in response to the March inspection, NBC reported. But around the same time, the department told the clinic it would be changing or reinterpreting certain rules, and it wanted to conduct interviews with all of the clinic's doctors, according to Vox. The department also received a new director, Dr. Randall Williams, who hired William Koebel to look into the clinic's abortion procedures. During the hearing on Oct. 29, Williams said he requested Koebel make a spreadsheet to track the menstrual periods of people who visited the clinic to find patients who had undergone "failed abortions," according to the Kansas City Star.

These regulations and the way they're enforced provide states the legal groundwork to shutter abortion clinics — in effect, getting rid of abortion access in the state without banning the procedure outright.

Why TRAP Laws Are Still Standing

Laws that regulate abortion providers beyond what doctors recommend aren't new. According to reproductive policy research organization the Guttmacher Institute, 24 states have laws or policies that regulate abortion providers beyond what is necessary for patients’ safety; 17 states have licensing standards similar to the state's standards for ambulatory surgical centers; and 18 states have requirements that dictate how big the clinic's rooms and corridors must be, among other restrictions that impede abortion access by making it harder for clinics to operate.

TRAP law litigation is pending in a handful of other states as well, including in Ohio, Kentucky, Louisiana, and Alabama, where a federal judge blocked "near total" ban on abortions on Oct. 29. In Kentucky, the state's last abortion clinic will also close if a TRAP law is allowed to stand. Jennifer Dalven, the director of the Reproductive Freedom Project at the ACLU, which is representing the Kentucky clinic, tells Bustle there were 17 places in the state where someone could get an abortion immediately after Roe v. Wade. Since Roe was decided in 1973, lawmakers have passed restriction after restriction, which has left the state with only one abortion-providing clinic.

"The TRAP law is the stealth version of the abortion ban," Dalven says. Total and near-total abortion bans in other states, like Alabama's, have been getting more public notice recently, she says, "but TRAP laws are just a quieter way of accomplishing the same result."

Lawmakers are continuing to pass TRAP laws, Dalven notes, despite the fact that the Supreme Court ruled against them in Whole Woman's Health v. Hellerstedt in 2016. Lee-Gilmore says that's because President Trump is appointing more anti-choice judges to federal benches. "When you're looking at abortion access and why TRAP restrictions are even still a thing in the States, you have to look at ... how Trump is radically remaking the judicial bench and the consequences that has on reproductive health and rights," she says. Since 2017, Trump's administration has appointed nearly one in four federal appeals court judges, per NPR, and one in seven district court judges.

What This Week's Hearing Could Mean For Missourians

If the St. Louis Planned Parenthood loses its abortion license, Lee-Gilmore says the 1 million women of reproductive age who live in Missouri will be living in a pre-Roe v. Wade world. "That pre-Roe reality that we've long been warning about is one decision away in the state of Missouri," she says.

Eisenberg says that the state seems more interested in "scoring political points" than improving the health of Missourians. He says they could instead work with Planned Parenthood to reduce maternal mortality and STI rates in the state, and improve access to care by expanding Medicaid, for example. "But that's not what they are doing," he says. "They're looking to distract from the realities of the public health crisis that the department of health and the state of Missouri is responsible for."

If there is no longer an abortion provider in the state, Missourians will have to cross the state line to access abortion care. Planned Parenthood recently built a massive facility 13 miles away, in Illinois, to prepare for this possibility.

Eisenberg says Missouri's case shows, among other things, that elections matter. "This is a department of health that is run by a conservative governor who has weaponized the health care regulations process, not legislation, to try to shut down abortion care in the state of Missouri for over 1 million women," he says.

Abortion, he says, will always be a part of people's lives. And if the St. Louis Planned Parenthood loses its license, “some folks who are in desperate situations will go to desperate measures to take care of their pregnancy.” Eisenberg says his team will be there for these people as long as they can — “but we do not want to see that happen.”

Editor’s note: This piece was updated to clarify the nature of the hearing.

More like this
25 Inspiring Quotes From Black Women To Celebrate Black History Month
By Kyli Rodriguez-Cayro and JR Thorpe
24 History-Making Black Women You Probably Didn't Learn About In School
By Ayana Lage and JR Thorpe
Twitter Is Identifying With Sally Field & Jane Fonda’s Friendship In New Viral Video
By Jake Viswanath
Watch Jacinda Arden’s Devastatingly Honest Resignation Speech
By Sam Ramsden
Get Even More From Bustle — Sign Up For The Newsletter
From hair trends to relationship advice, our daily newsletter has everything you need to sound like a person who’s on TikTok, even if you aren’t.