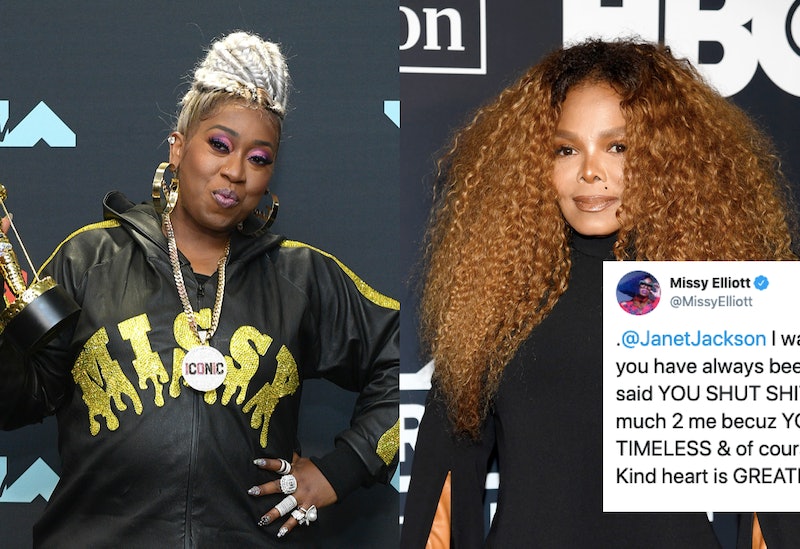 On Monday, Aug. 26, Missy Elliott became the first-ever female rapper to receive MTV's Vanguard Award during the 2019 VMAs. Tons of big-name stars were there to pay tribute to the long-time icon, but one of Elliott's closest friends had to send her love from afar. Missy Elliott's tweet about Janet Jackson supporting her via video message at the VMAs was really, really touching. It also proved that the two legends have an unbreakable bond, and are basically the definition of superstar friendship goals.

Since Jackson wasn't able to be at the VMAs for Elliott's history-making moment, she recorded a heartfelt message on Instagram for the star instead. "Everybody I know is talking about how much of a genius and how brilliant you are, and it's all true," Jackson began.

She then went on to tell Elliott that, while her career has pretty much been endlessly iconic, "I want to talk about how beautiful your soul is — the person you are." Jackson continued, "Your soul is so true and so real, and your energy and your spirit is beyond ... and without any of that, your work would not shine the way that it does." And that was just the beginning.

Elliott was clearly touched by all the kind things Jackson had to say, because she decided to thank her friend on Twitter with an equally sweet and genuine message of her own. "@JanetJackson I was ballin watching this becuz you have always been there 4 me!" the rapper wrote. "When texted me & said YOU SHUT SH*T DOWN last night that meant so much 2 me becuz YOU ARE THE BLUEPRINT! You r TIMELESS & of course your music is GREAT but your Kind heart is GREATER," she concluded, I [heart emoji] YOU."

Elliott made a point of shouting out Jackson not once, but twice during her acceptance speech for the Video Vanguard Award — an award that was named after Jackson's late brother, Michael. "I have worked diligently for over two decades and I never thought that I would be standing up here receiving this award, so it means so much to me," she began.

The rapper then thanked a whole slew of important people in her life, and when she got to Jackson's name, she said, "I know you are watching, I love you. I thank you for being such a great friend." Aww. These two. Anyone else tearing up a little bit?

Elliott also called out several artists in her acceptance speech who've inspired her and had an impact on her decade-spanning career. Among those named were Busta Rhymes, Peter Gabriel, Madonna, and, of course, her good friend, Janet Jackson.

Jackson and Elliott's friendship is such a great example of not only women supporting other women, but legends supporting other legends. They've both been incredibly successful in similar spaces of music at the same time, and clearly have no qualms about partially crediting their respective successes to the work of one another. It's truly a beautiful thing.

More like this
Taylor Lautner Thought Taylor Swift's 2009 VMAs Interruption Was A "Skit"
By Alyssa Lapid
The Meaning Of Steve Lacy’s “Bad Habit” Lyrics
By Radhika Menon
9 Photos Of Celebrity Couples & Unexpected Duos At The 2023 Grammys
By Jake Viswanath
The History Of Taylor Swift's "All Too Well" & What The Lyrics Actually Mean
By Jake Viswanath
Get Even More From Bustle — Sign Up For The Newsletter
From hair trends to relationship advice, our daily newsletter has everything you need to sound like a person who’s on TikTok, even if you aren’t.