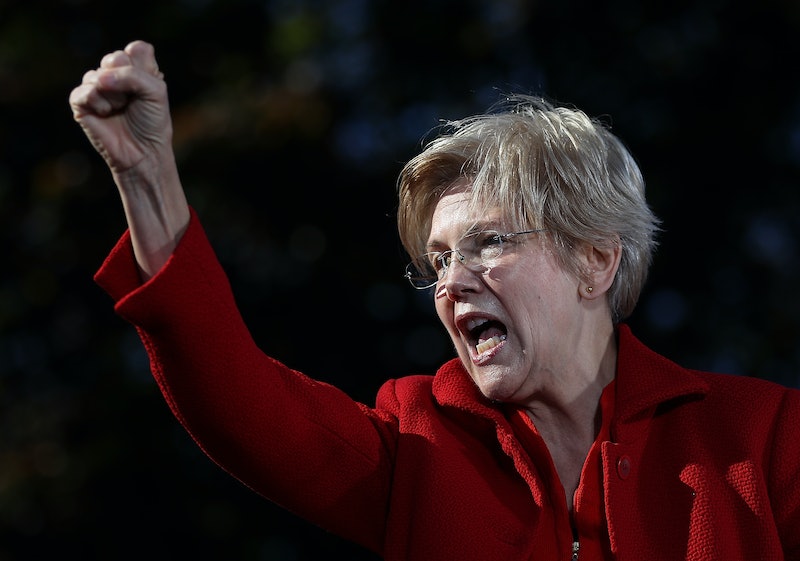 During the debate over Alabama Sen. Jeff Sessions' Cabinet confirmation on Tuesday, Senate Majority Leader Mitch McConnell blocked Sen. Elizabeth Warren from speaking out against the controversial attorney general nominee. As she expressed concern for Sessions' behavior toward black Americans, Warren was suddenly interrupted and was not allowed to continue her remarks. Video of McConnell's interruption of Warren showed the troubling confrontation.

The video below shows Warren addressing the Senate, when she is stopped by McConnell. McConnell addressed Montana GOP Sen. Steve Daines, who was presiding over the Senate at that time, and accused Warren of violating the Senate's Rule 19.

The senator has impugned the motives and conduct of our colleague from Alabama... I call the senator to order under the provisions of Rule 19.

Warren tried to rebut, but she was ultimately silenced by Daines, who recognized McConnell's Rule 19 request. "The senator will take her seat," Daines said.

So, what is Rule 19? According to Senate's committee on rules and administration, senators are not allowed to "impute to another senator or to other senators any conduct or motive unworthy or unbecoming a senator." In other words, senators can't "directly or indirectly" attribute inappropriate behavior to each other when addressing the chamber.

When she was interrupted, Warren had been trying to read part of a letter written by Coretta Scott King in 1986 to oppose Sessions' nomination to a federal judgeship. King, who spent significant time in the southern Alabama district where Sessions was then a U.S. attorney, criticized his "temperament, fairness, and judgment" when he was nominated to serve as a federal judge in the same district.

"Mr. Sessions has used the awesome power of his office to chill the free exercise of the vote by black citizens in the district he now seeks to serve as a federal judge," King wrote. When Warren recited that very line in the Senate on Tuesday, McConnell raised his Rule 19 concern.

Sessions has been awaiting his confirmation for weeks, but he was needed in the Senate until Tuesday. In a tie vote that had to be decided by Vice President Mike Pence, the Senate confirmed on Tuesday Trump nominee Betsy DeVos as secretary of Education. Without Sessions' vote, DeVos likely would not have been confirmed.

Now that DeVos has been confirmed, Sessions' nomination is under official consideration by the Senate. The Senate was debating that nomination on Tuesday when Warren was silenced by her GOP colleagues. Although the Republican leadership was able to quiet Warren, Senate Democrats reportedly planned their second late-night session of the week to keep the anti-Sessions conversation going. Thanks to the Senate Democrats' work so far, there's still time to protest Sessions' nomination to the attorney general spot, but time may be running out.