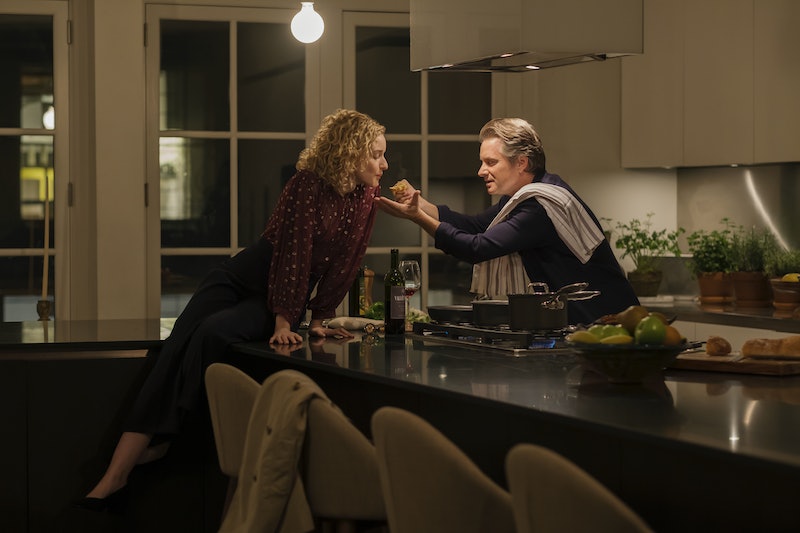 "Modern Love" is a long-running Sunday Style section column in which people write personal essays about their own concise, unapologetically corny love stories. The show is a tribute to that same kind of tidy romance. Detractors will surely bemoan that real love is complicated and messy and open-ended, which is as true as it is besides the point. If real love is an epic, the NYT's Modern Love has always been a snapshot. Now, it's 30 minutes of television.

As an episode, "So He Looked Like Dad. It Was Just Dinner, Right?" survives the conversion well, complicating its characters and refusing to reduce the idea of a woman having "daddy issues" — an explicitly gendered and infantilizing stereotype — to a sexual fetish. Madeleine (Julia Garner) craves unconditional male affection from men closer to her dad's age than her own, which she traces back to her father's death when she was only 11. What starts as an innocent crush on the office "robotics genius" — renamed Peter for TV and played by Shea Whigham — leads to an unhealthy relationship for both. Peter finds it easy to worry about Madeleine, her round face haloed by blonde Aileen Quinn curls, her adult teeth the size of Chiclets. Even her advances feel childish, courting his attention with homemade cookies and by performatively tying her shoes just outside his door. When she gets his attention, she's not sure what to do with it. In one early scene, Peter asks if she likes the music he's playing. "Yeah, I really, really do," she says, then darts down the hall.

Madeleine's awkward, at least partly because there's no real script for how to get what she wants from Peter. If it was approval in the form of sex, she'd probably have a better idea of how to seduce him. When their "first date" inevitably meanders into the bedroom, Maddy desexualizes Peter. "He had a gray comforter. He was a gray comforter," she says in a voiceover, borrowing a memorable line from the original NYT column. She asks that he tell her a story from when she was young, as though he is, in actuality, her dad. "Only if you want to," she adds. It's coy, but it's not a come-on. She sounds more like a daughter afraid to interrupt her busy father.

In the newspaper column, the writer only sees the robotics genius once. That's sufficient for her to understand that she can't get what she wants from this man without giving more than she's comfortable with. The show at least explores the possibility that Maddy can have it all. Peter sees her through a trip to the ER, a walk through the zoo. He buys her a new red coat.

It's difficult to watch because we can see what Maddy can't: that Peter, too, is trying to negotiate the unclear terms of the relationship. He knows that a man in a sports coat who loves Yo-Yo Ma could be a dad (in fact, he is a dad and a granddad), but how can she think he will pretend to be hers? When he finally kisses her, Maddy loses it on him: "What the f*ck are you doing?"

They're both pretending not to see the other person: Maddy ignoring Peter's romantic feelings, Peter ignoring Maddy's innate desire for an older man's love. To continue basking in his affection, she tries to convince herself to be physically attracted to him. When she can't, she ultimately decides to let go. It seems almost optimistic that this clarity didn't come, as it often does in pop culture, at the expense of damaging sex with an inappropriate man.

It's where the episode should end...except it doesn't. In a final scene, Peter tells Madeleine that he's taking a sabbatical from their work, tearily confessing that he's not doing well in the aftermath of their relationship. He tells her that she's smart, resourceful, and beautiful. "The daughter of any father's dreams." Instead of letting him walk away, she decides that the moment has been "transformational" (voiceover, again) and calls out for him to wait.

For the first time in the episode, her intentions are as unclear to the audience as they have always been to Peter. Why does she want him to wait? If the problem with Maddy was always a bit reductive (a woman with self-described "daddy issues"), then the suggestion that a fatherly pat on the head could be her solution feels unsettling. Ultimately, the series never resolves the moment, which gestures at the possibility that even this messy, emotional affair can be — true to the Modern Love brand — tidied up.

But the episode succeeds in treating Maddy's paternal longing as something more significant than a sexual fetish for older men; it resists, for example, a trite bedroom scene in which she suggestively calls him Daddy. Her unresolved feelings about her father's early death are consistently an obstacle to real romance with Peter — never just foreplay in service of it.

More like this
Daryl McCormack On His Unusual First Audition With Emma Thompson
By Olivia-Anne Cleary
What’s New On Netflix: Lana Condor’s Ghostly Comedy & A Sexy Reality Series
By Arya Roshanian
Lizzo Proved She’s Team Jeremiah During Her ‘The Summer I Turned Pretty’ Review
By Grace Wehniainen
Natalia Dyer Opened Up About Steve & Nancy’s “Lovely” ‘Stranger Things’ 4 Dynamic
By Grace Wehniainen
Get Even More From Bustle — Sign Up For The Newsletter