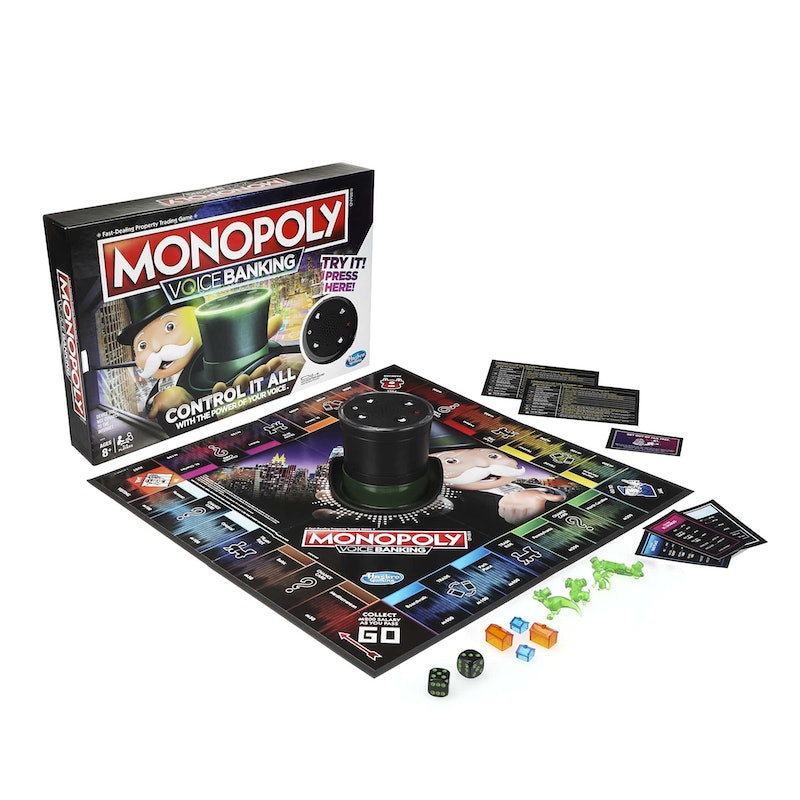 Well, it’s finally happened: In our increasingly paper-free world, even Mr. Monopoly has gone cashless. The soon-to-be-released Monopoly Voice Activated Banking Game is a brand new edition of the classic board game Monopoly that does away entirely with cash and cards, using a top hat-shaped “banking unit” that responds to players’ voices to keep track of… well, just about everything that happens over the course of a rousing game of Monopoly. The future really is now, even when it comes to imaginary real estate markets.

Initially marketed by Parker Brothers and later by Hasbro, Monopoly has had no shortage of variations released over the years: From purely cosmetic upgrades piggybacking off of pop culture favorites (hi there, Game Of Thrones Monopoly) to versions with new and unusual rule sets (in Monopoly For Millennials, you can’t actually buy property — just like real millennials, who are obviously too busy buying avocado toast instead!), there’s basically an edition of Monopoly for everyone out there by this point. But while the Voice Activated Banking edition plays primarily by the classic Monopoly rules we know and love (or love to hate, depending on your perspective), it does add something new to the mix from an interestingly technological standpoint. It’ll be available for pre-order at Walmart starting on June 19, with an actual release date of July 1, 2019.

The big feature here is the voice-activated banking unit. For one thing, it’s shaped like Mr. Monopoly’s top hat; for another, it’s plunked right down in the middle of the game board; and for yet one more thing, its presence also means the absence of any physical dollar bills or cards.

(Also, if you, like myself, still think of Mr. Monopoly as Rich Uncle Pennybags, fun fact: He was apparently renamed in 1999. I’m not entirely sure why, but commonly-cited wisdom notes it to have been part of a marketing campaign.)

The hat takes care of every transaction that occurs during the game, from buying properties to handing over rent. It’s got buttons on it that represent each of the tokens with which players might denote their presence; then, whenever you want to, say, buy a property, you press your button and say “Buy Boardwalk” (or Indiana Avenue, or Baltic Avenue, or whatever open property you’ve just landed on). Mr. Monopoly will take care of the transaction from there. In stark contrast to the Cheater’s Edition of Monopoly released back in 2018, you absolutely cannot cheat while playing the Voice Activated Banking version of Monopoly; Mr. Monopoly won’t stand for it.

Oh, and if you’re curious what kind of voice Mr. Monopoly has, I can guarantee that it’s… probably not what you think. I’ve heard samples of it, and y’all?

I kid you not.

Sorry if you were hoping he’d sound like, I don’t know, Sir Patrick Stewart or what have you.

Anyway, this isn’t the first time Monopoly has ventured into tech-driven waters; an “Ultimate Banking Edition” version of the game hit shelves in 2016 which also utilized some fancy-schmancy electronic devices to spice up the nearly century-old game (the very first edition of Monopoly as we know it today was released in 1935). In that version, money was handle via mock debit cards and an “ultimate banking unit” Good Housekeeping likened to a “miniature ATM.” Whenever you bought a property, you’d use the banking unit to scan your bank card, then the property card, in order to subtract the funds needed to secure the property from your bank balance; then, if you landed on a property owned by someone else, you’d use the unit to scan first your own card, then the card of the player who owed the property in order to pay them rent. The banking unit also handled events caused by Community Chest or Chance cards, as well as threw new “Life Events” into the mix — things that might, for example, cause the value of your property to go up or down.

The Voice Activated Banking version of Monopoly sounds like an advancement on this previous edition, with streamlined controls and an amusingly shaped “banking unit” you can actually talk to (and which talks back). Of course, if you have trouble remembering what properties you own or how much cash you currently have without the physical representations of them sitting right in front of you (that would be me), then the Monopoly Voice Activated Banking Game may not be for you — but it does look like an interesting experiment all the same.