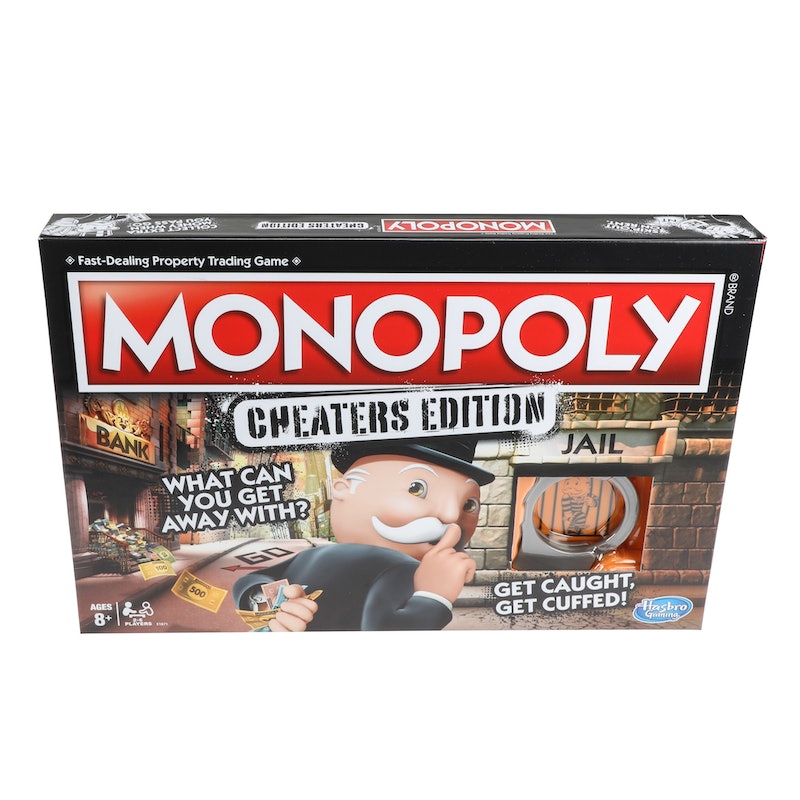 If you’ve ever tried to sneak a few extra bills out of the bank while playing Monopoly or move your little top hat an extra space or two without anyone noticing, I have good news: A new version of the game is coming out soon, and it’s just for you. Monopoly: Cheater’s Edition is due to arrive this fall — and while it does sound a little vicious, it also sounds like a ton of fun. If, y’know, you play it with the right people. This is one instance where it probably pays to know your audience.

This isn’t the first time Hasbro has dipped its toe in the cheater’s water with regards to their flagship board game; just a few weeks ago, the company launched a Facebook Messenger bot called the Monopoly CheatBot. The bot was issued in response to a survey Hasbro recently conducted of around 2,000 people that found that almost half of respondents admitted to cheating at Monopoly in some way, shape, or form — but the difference between it and the Cheater’s Edition of the game, of course, is the angle: The CheatBot is actually intended to help curb cheating at Monopoly. If you catch someone at it, you can check in with Mr. Monopoly via the bot, who will issue forth punishments and consequences for the perpetrators. (For the curious, the Monopoly CheatBot is available until Feb. 16; you can access it by going to Monopoly’s Facebook page and clicking the “Send Message” button below the header image.)

Not so with Monopoly: Cheater’s Edition; this version of the game is clearly aimed at the cheaters — the ones who are willing to, uh, bend the rules a bit in order to ensure their own success in this most cutthroat of board games. Indeed, it actually encourages players to do nefarious deeds as they play the game.

The goal is still the same as always — finish the game with more money and assets than anyone else — but according to Insider, the way you’ll go about doing it is a little… different than you may be used to. For example, although the regular decks of Community Chest and Chance cards will still be present, there will also be a third deck containing 15 “cheat cards” that will be in play, too. These cards ask players to complete tasks such as stealing money from the bank, moving another player’s token during your turn, giving someone less money than you actually owe them, and collecting rent from someone else’s property. At any point during the game, five of the cheat cards may be dealt out onto the board; players may then attempt to carry off the tasks dictated by them at any point.

But here’s the thing: You can’t get caught. Each card, you see, lists the reward you’ll receive for successfully completing the task without alerting anyone else to what you’re doing… as well as the price for failing and getting caught. You might, for example, end up in jail — and wearing an actual handcuff that literally ties you to the game board.

I am not kidding.

There are also some squares on the board that have been “hacked” such that the rules are new, too. For example, if you’re the first person to land on Pennsylvania Avenue, you don’t have to pay a cent to add it to your real estate portfolio — it’s yours for the low, low price of absolutely nothing. So, y'know, just keep that in mind, too.

Does all this stack the deck (proverbially and literally) in favor of some players? You bet. And, indeed, I actually kind of wonder what it’s going to do to the, uh, friendly dynamic between players. In 2017, the Canadian site Online Casino conducted a survey of 1,000 American adults to find out where we all stand on board games, and, well… I won’t sugarcoat it: Monopoly turned out to be the game most likely to make you hate all your friends. Your family, too. In fact, it made people hate pretty much everyone they played with… except their partners, for some reason. (I know — I didn’t see that coming, either). According to the survey, two in five players said that they’d argued with friends while playing the game, while a third said that they’d fought with siblings. What’s more, the fights were… dramatic. Half of respondents reported that getting into them resulted in hurt feelings — and a whopping 41 percent said that they’d actually thrown game pieces or flipped the board out of anger.

(But, again, apparently not in significant others — only six percent of respondents said they fought with their partners while playing Monopoly.The couple that becomes real estate moguls together, stays together, I guess? Or… something.)

Anyway, my sense is that, if played by the wrong people, Monopoly: Cheater’s Edition could end up tearing a lot of people apart, Lisa. If played by the right people, though, it actually sounds like it could be quite the ride; the key, I think, is probably to maintain your sense of humor about the whole thing. And hey, maybe that’ll be easier with the Cheater’s Edition than it is with regular ol’ Monopoly. The classic edition is many things, but I’m not sure I’d say “funny”is one of them. The Cheater’s Edition, though? That sounds hilarious.

Monopoly: Cheater’s Edition is appropriate for two to six players aged 8 years and older. It’ll hit shelves in the fall of 2018; you’ll be able to get a hold of it for $19.99 a pop.

Good luck — and may the best cheater win!

More like this
Ashamed Of Your Screen Time Stats? Here's How To Change That
By Alexis Morillo
Learning To Love, Not Judge, The Lunchbox Wives Of TikTok
By Esther Zuckerman
I Spent 2 Years Trying TikTok’s Dating Advice
By Kailynn Johnson
Annie Rauwerda Finds Treasure In The Depths Of Wikipedia
By Chloe Foussianes
Get Even More From Bustle — Sign Up For The Newsletter
From hair trends to relationship advice, our daily newsletter has everything you need to sound like a person who’s on TikTok, even if you aren’t.