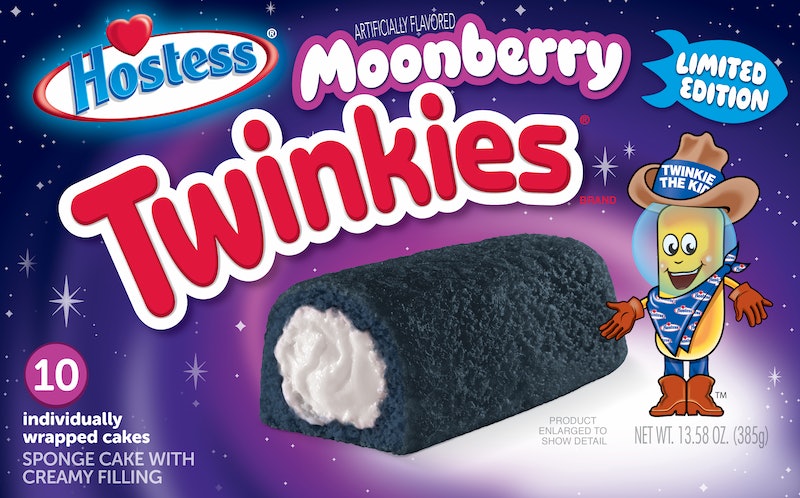 This summer — July 11, specifically — marked the 50th anniversary of the Moon Landing, and all sorts of brands are getting in on the action. One of the latest? Hostess, which is about to release new Moonberry Twinkies. What's a moonberry? Um, it doesn't seem anyone knows.

While the box doesn't say the treats were specifically created for the Moon Landing anniversary, Twinkie the Kid's astronaut outfit says otherwise. But whether these are meant to cash in on the nostalgia or not, they will certainly draw fans of the old school dessert in with their mysterious flavor. Like, it's actually a mystery what these taste like. According to a press release, the Twinkies have "dark blue, night sky colored sponge cake with a fruity mystery 'moonberry' flavored creamy filling." Regular Twinkies have golden sponge cake and a vanilla flavored filling.

One would think the mystery flavor of the new Twinkies would taste like berries, right? Since moonberries aren't real? If you want to find out for yourself — and probably dye your tongue blue with the cake part in the process — the special edition Twinkies will be available exclusively at Walmart starting Monday, August 5 for a limited time. A 10-pack of the treats will cost $2.97.

This not the only Twinkies news of late. No, no, far from it. In fact, another Walmart exclusive Twinkie flavor was released in July. As reported by the food Instagram Candy Hunting, Orange Crème Pop Twinkies were available at Walmart for a limited time as of July 3, which means they still could be on shelves at some locations. These ones have golden sponge cake and a orange creme filling.

There was also Twinkie-flavored coffee recently released. Yep, there are Hostess K-cups out there for anyone who likes their coffee... um, more artificially flavored dessert-like? In addition to Twinkie, the coffee also comes in Ding-Dong, Sno-Ball, and Honey Bun flavors. Thrillist reviewed the coffees and said that while the Twinkie one didn't exactly nail the "sweet flavors of Twinkies sponge cake" like it was said to, it was "not shy with the vanilla notes."

Lastly, as reported by Food & Wine, it was rumored in mid-July that Twinkies cereal is about to come out and follow in the footsteps of two other cereal collaborations between Hostess and Post: Powdered Donettes cereal and Honey Bun cereal. It remains to be seen when and if Twinkies cereal will be released, but a supposed photo of the box circulated online, and people had thoughts on what the cereal looks like. Candy Hunting said the cereal pieces look like lactobacillus, and commenters on the account said they remind them of both packing peanuts and Cheetos Puffs. As for what they taste like, perhaps Twinkie fans will find out soon — and get to see if they actually have any filling inside, although it doesn't look like it.

You see? There's new Twinkies flavors, Twinkies-inspired foods, and Twinkies in your coffee. It might be 2019, but Twinkies are still all over the place.