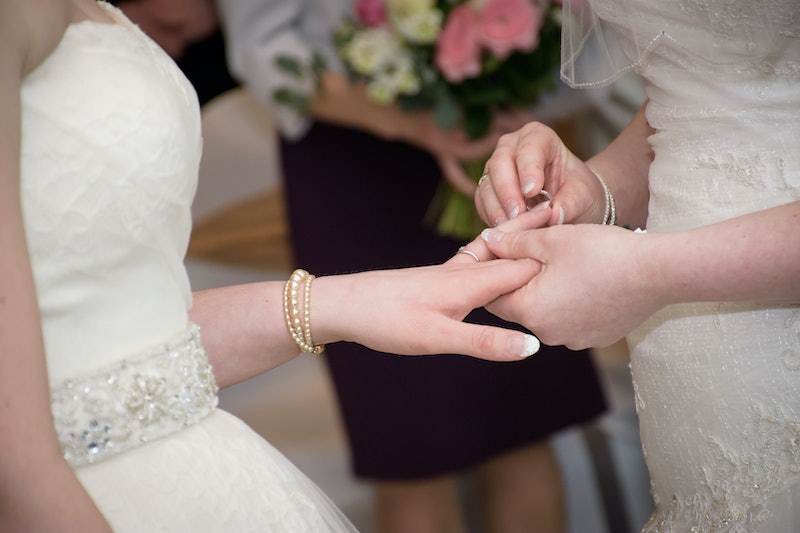 From the housing industry to buying cereal to using napkins, the hyperbolic list of things millennials have “killed” is long and spares no one and nothing. Well, almost nothing. One thing the younger generations are saving? Prenuptial agreements. Yes, more millennials are getting prenups than previous generations. (Is now a good time to demand a remix of the “Wedding March” with M.I.A.-style cash register sounds?)

A study from the American Academy of Matrimonial Lawyers found an increase in prenups between 2013 and 2016: 62 percent of lawyers surveyed reported an uptick in clients seeking prenups. Millennials, in particular, appeared to be responsible for that increase with 51 percent of attorneys saying they more saw young couples requesting prenups.

“Prenup” has become something of a dirty word. It has implications of “gold digging.” (Cue the “we want prenup” part of Kanye West’s “Gold Digger.”) It’s a less fun conversation than say, picking out wedding colors or tasting cakes. Perhaps, hardest of all, it requires a couple to acknowledge the possibility of their marriage not lasting.

Here’s what a prenuptial agreement actually entails: In the most basic sense, it’s a legal contract a couple signs before marriage. It addressed finances and future assets, should they get divorced.

Is discussing a prenup as romantic and fun as picking out floral arrangements? I mean, not on its surface level, no. Of course, the same is true of marriage or any long-term relationship: there are fun parts and boring parts and romantic parts and parts that suck to think and talk about.

Learning how to talk about money with your partner is difficult, especially when money talk has become so taboo. However, it’s no secret money can be a major stress in marriages. One study from Kansas State University found a correlation between arguments about money and decreased relationship satisfaction. That’s probably not a big revelation to anyone who’s ever had to have a money conversation in a relationship. “Arguments about money is by far the top predictor of divorce,” Sonya Britt, Kansas State University assistant professor of family studies and human services and program director of personal financial planning, said in a release for the study. “It’s not children, sex, in-laws or anything else. It’s money — for both men and women.”

So, does a prenup help with those conversations? For some, maybe. As Joslin Davis, president of the American Academy of Matrimonial Lawyers, said in a statement: “Couples are getting married at later ages these days and are consequently entering their relationships with more to protect in the event of a divorce. A prenuptial agreement often represents the most effective way to address these concerns and safeguard individual assets before exchanging vows.”

If all this talk of prenups is taking the romance out of marriage, fear not: people are by and large still getting married for love, not money. One Pew Research Center’s most recent surveys on marriage found that 88 percent of the public cite “love” as a “very important reason to get married. “Financial stability” was a very important reason for marriage for 28 percent of Americans. While it might seem counterintuitive to this recent study on prenups, you also have millennials to thank for divorce rates are dropping.

Refinery29 recently spoke to five different women about why they decided to get a prenup. Reasons varied from one partner owning a business to one partner being from another country to both partners coming from different financial backgrounds. For most of the women, getting a prenup wasn’t a testament to the strength of their relationship; in fact, it seemed to be quite the opposite. “Nobody goes into a prenup thinking you’re gonna get a divorce,” one person said. “You go into it to protect each other.”

Whether or not a prenup makes sense in your relationship depends, like most things, on your specific relationship. The important thing to keep in mind is that it is an option, and there shouldn’t be any harm, or stigma, associated with having a conversation with your partner about it.