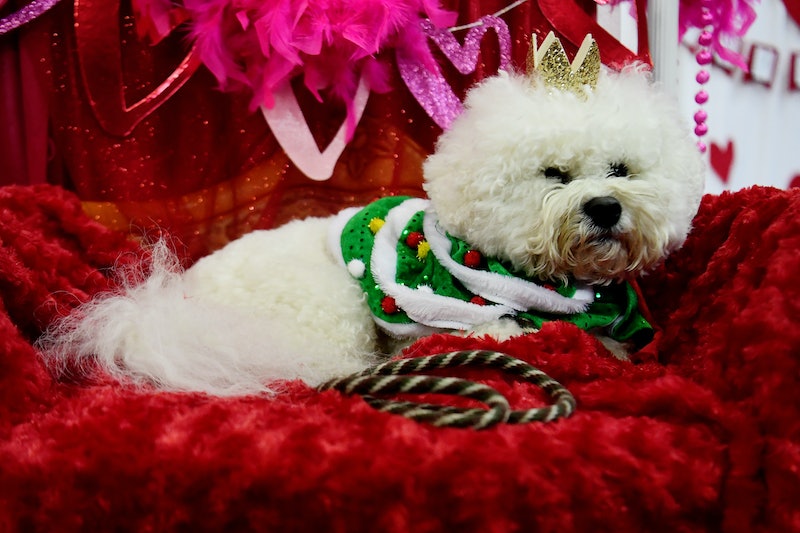 There's an old adage that I identify with more than most old adages: "Love me, love my dog." As it turns out, this also works the other way around — as in, from a dog's perspective, "love my human, better hope I love you." A new survey from on-demand dog-walking app Wag! found that 50 percent of people said they wouldn't date someone their dog doesn't like, and 77 percent said that whether or not their dog likes their partner is an important factor for them when they're pursuing a romantic relationship. Basically, if Fido doesn't approve, you're out.

Personally, I trust my dog's opinion. If my dog doesn't like you, it's not going to happen. And, it seems I'm hardly alone in this sentiment. The survey, conducted by OnePoll, found that seven-in-10 people consider their dog an excellent judge of character. What's more, 23 percent of people who've ignored their pup's warnings in the past said they regret it and will never make the same mistake again. According to the survey, "Expressing jealousy over the attention dog owners give their pups was the number one red flag when it came to dating. Half of those surveyed said jealousy toward their pup is not something they would put up with."

It's actually pretty simple. My dog was here first, and if you can't accept that, buh-bye. In addition, "Nearly half (45 percent) of dog owners said not taking interest in their dog is a turn off, and ignoring the dog is nearly as bad (43 percent)."

Another study from pet wellness company Ollie found that 96 percent of people wouldn't even consider dating someone who doesn't like dogs at all, the Bolde reported. What's more, people admitted to using their dogs to find dates: If you're perusing the dating apps and you have a dog, featuring your dog in your pics might get your more matches. "A pretty solid 61 percent of people found it a turn-on whenever someone featured their pet with them in their dating app profile photos. That being said, this only works for dogs — a third of people said people with cats were less attractive," Piper Ryan wrote for Bolde. So, if you don't have a dog, borrow a friend's pup to spruce up your dating-app pics.

According to Wag!, red flags your date and your dog don't jive include some pretty obvious dog gaffes. "Unsurprisingly, 50 percent of respondents agreed that being too rough with their dog is unacceptable," the survey revealed. "43 percent also agreed that a partner moving their dog into another room during a date is a huge offense."

And hey, if your date doesn't like your dog, it's easier to let them walk because Fido will keep you company and will let you pick the movie (I recommend Must Love Dogs). A study published in the Journal of Personality and Social Psychology found that pet parents "Enjoyed better well-being when their pets fulfilled social needs better, and the support that pets provided complemented rather than competed with human sources."

As someone who has lived with dogs more than half my life, I can't imagine life without them. If a potential partner doesn't feel the same, I have no problem cutting them loose. After all, there's lots of dog lovers out there, and there's no reason to settle for less.

More like this
Are Gemini & Leo Compatible In A Relationship?
By Kristine Fellizar
Melony & Gia Prove That Couples Who Grow Together, Stay Together
By Jessica Morgan
The 3 Dating Apps Queer Women & Nonbinary Folks Actually Like
By Emma Carey
8 Flirty Games To Play Over Text With Your Crush
By Lexi Inks
Get Even More From Bustle — Sign Up For The Newsletter