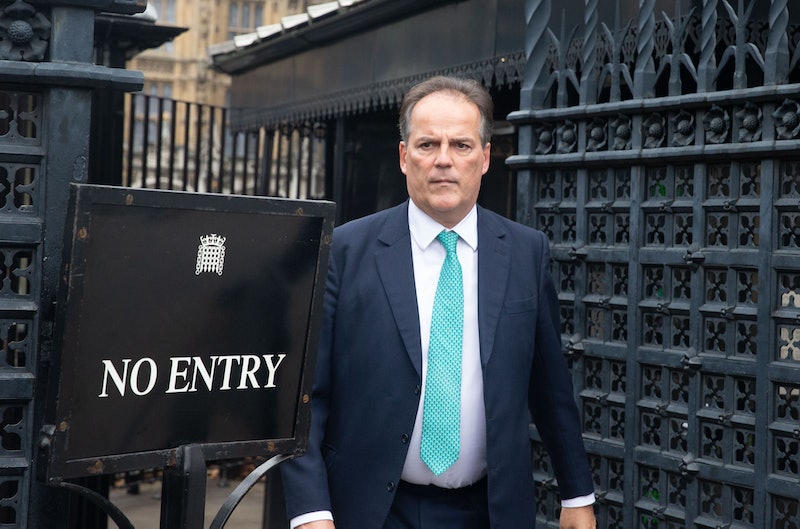 With the issue of climate change becoming ever more pressing, protest actions are increasing. But one MP has faced heavy criticism for his response to a peaceful Greenpeace protest. On Thursday night, activists gatecrashed the Chancellor's annual speech at Mansion House. Wearing a red dress with a "Climate Emergency" sash, one female campaigner began to walk to the front of the room only to be aggressively stopped and forcibly removed. TV news cameras filmed the incident, leading to accusations that Conservative MP Mark Field had assaulted the climate protester. As the Evening Standard reports, Field has now been suspended as a minister pending an investigation.

The video shows 54-year-old Field getting out of his seat to push the woman against a pillar before manhandling her out of the room. In a statement given to ITV News, the MP — who is also a Foreign Office minister of state for Asia and the Pacific — said he has referred himself to the Cabinet Office "to examine whether there has been a breach of the ministerial code."

He also apologised to the protester, saying: "In the confusion, many guests understandably felt threatened and, when one protester rushed past me towards the top table, I instinctively reacted. There was no security present and I was for a split-second genuinely worried she might have been armed.

"As a result, I grasped the intruder firmly in order to remove her from the room as swiftly as possible. I deeply regret this episode and unreservedly apologise to the lady concerned for grabbing her but, in the current climate, I felt the need to act decisively to close down the threat to the safety of those present."

As the BBC reports, City of London Police are looking into "a number of third-party reports of a possible assault." During an interview on Good Morning Britain, Conservative Party chairman Brandon Lewis also said the party will be investigating the "full details of what happened," but said he understood that it would be "very hard for anybody to look at that and not be astonished."

Greenpeace climate campaigner Areeba Hamid told the BBC the female protester in question was "in shock" after the incident, but was recovering. "We went into that event announcing who we were very clearly," she continued. "I think Mark Field should have a long hard stare at himself and think whether that behaviour is in keeping with someone in public office."

The MP has in fact received several calls to resign by members of the public and other politicians. "This appears to be assault. He must be immediately suspended or sacked due to violence against women," Labour MP Dawn Butler tweeted. Ed Davey, who is running for Liberal Democrat leadership, added that Field needed to resign. "No ifs, no buts about this."

And Labour politician Jess Phillips spoke about dealing with protesters: "She posed no credible threat from what I can see. There is very little else that could justify this and anyone can see that this could have been done without physical contact. Every MP has to deal with protest and conflict it is done with words. To watch this is so so awful."

But some MPs defended Field's actions. Conservative MP Vicky Ford noted: "If she’d been carrying a weapon, we’d all be hailing him a hero." And, as the Independent reports, Tory politician Peter Bottomley said: "I think there's no reason to criticise Mark Field. Of course it wasn't an assault, it was a reversal of direction."

A previous tweet written by Field has added fuel to the fire. Twitter users have noted that its message — "the UK remains committed to helping women all over the world to feel safe and protected in the work they do, so they can speak freely and be part of the change we all want" — appears to be at odds with his recent actions.

The results of the investigations are expected to be publicised in due course.