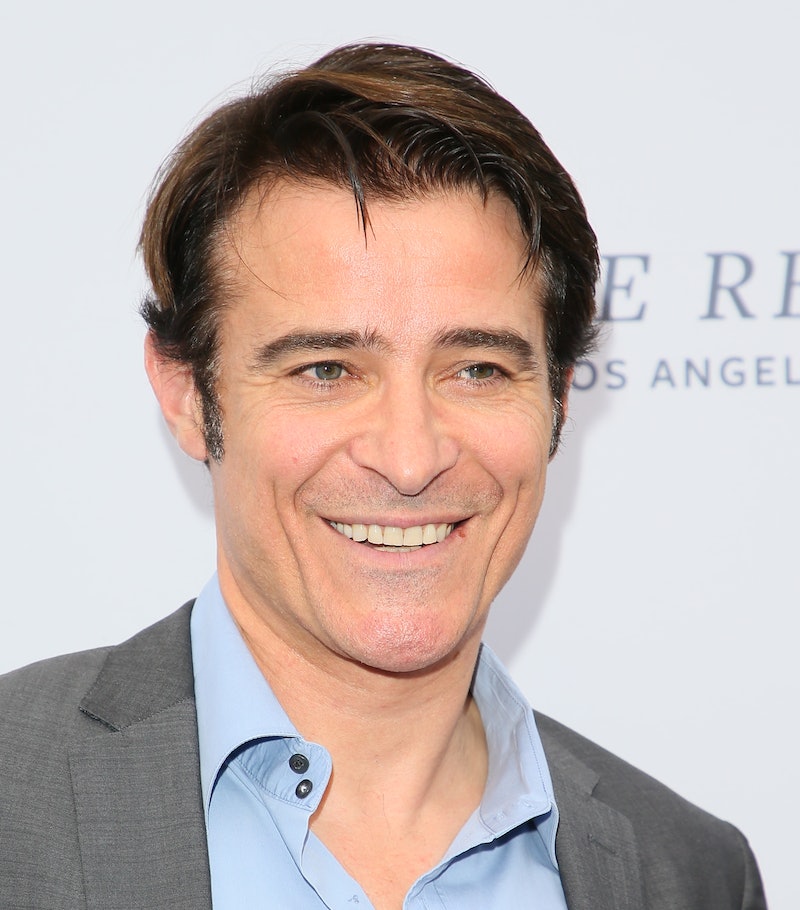 Ahead of Season 3, series creator Victor Fresco told The Hollywood Reporter, "We like the idea that there are other people out there — not the government — that are looking into this, and it's a threat to Sheila and obviously to Joel also, so we'll track that story into Season 3." Enter Poplovic, played by Goran Visnjic (ER, Timeless). TV Line reported he's set to be in five episodes of Season 3, and that's bad news for Santa Clarita's favorite undead realtor.

In the first episode of the show, Poplovic is still in Serbia and he's just caught his very first zombie. He tells the zombie that he's been searching for him for a long time, and then stabs him with a knife. As the man's black blood oozes out, Poplovic is elated to see he's really captured an undead person and shows off the black blood to a camera mounted on the wall. It's unknown who's watching on the other side of that camera, but since Poplovic is a military colonel for Serbia, it's likely someone else from the Serbian government or military. Shortly afterwards, though, the zombie kills himself to avoid being Poplovic's experiment and a phone rings to tell Poplovic he's being transferred to Santa Clarita.

Joel first runs into Poplovic at the Serbian Consulate, further proving that Poplovic's zombie hunt is government-sponsored — but he's not seeking to kill the undead. Poplovic distinguishes his motive from the Knights of Serbia by telling his underlings that they need to catch the zombie in Santa Clarita before the "meddlesome" knights kill it. "I need it alive," Poplovic says ominously.

By Episode 10, Joel discovers why Poplovic needs an alive undead person. Poplovic learned that the black goo in the undead's veins stops cells from aging. He's seeking to market some sort of fountain of youth to the beauty industry, but he needs a fresh supply of zombie blood to do it. Enter Sheila. Poplovic wants to lock Sheila up and force her to bite other people so Poplovic can harvest as much goo as he needs. He essentially wants a farm of zombies. And when Poplovic reveals his plan to Joel, he also reveals that not everyone in the Serbian government approves. "The Serbian government sponsored my initial research as they feared a modern day plague, but soon I found something of far greater value," he explains.

It sounds like Poplovic was originally tasked with finding and killing zombies much like the Knights of Serbia. But in that process, he stumbled upon the anti-aging capabilities of zombie blood and switched courses to be more self-serving. At least one high-ranking official knows about his real plan, though — the person on the other side of the camera from Episode 1. They saw Poplovic triumphantly hold up the black goo, they knew about an undead person in Santa Clarita, and they had the power to transfer Poplovic into an undercover Serbian consulate role.

When this mystery person learns that Joel and Sheila killed Poplovic, they may assign a new colonel to his detail and the Hammonds will face a similar threat in a potential Season 4. Poplovic also revealed in the first episode that he has a family, so perhaps they'll come and avenge his death, giving Joel and Sheila yet another foe to deal with. Essentially, Poplovic may be dead, but Joel and Sheila aren't out of the woods. And now that it seems like they're both zombies, they have twice the reason to worry.