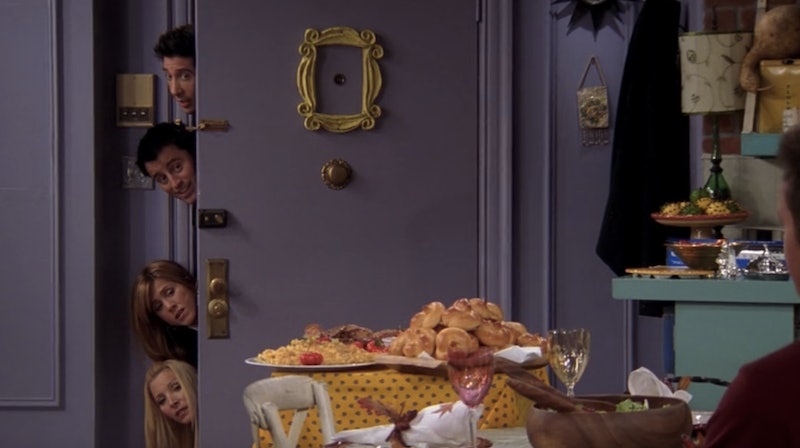 In the daunting, post-holidays freeze, you're probably looking to lay low, stay in, and spend some quality time with the friends who matter most to you. That is, Ross, Rachel, Monica, Chandler, Joey, and Phoebe. Yes, Friends is television comfort food, the sitcom equivalent of grilled cheese and tomato soup after a day in the brutal cold. And you're about to get a fresh serving, because Friends is now airing every night on MTV. Yup, every single night.

Wait, what? Since when? Well, since New Year's Day, while we were too busy celebrating the death of 2016. Oh. My. God. And it's not just one episode, I'm talking about a solid chunk of your evening. Episodes are being shown 6 p.m. to 8 p.m., so you can finally cancel those after-work happy hour plans that you had with your friend from college — what a relief.

Now, some of you may acknowledge that Friends routinely makes the rounds in syndication, and furthermore, it has been available on a certain streaming service since 2014. However, these are trying times in our country, and you don't know what kind of struggles your peers may be going through right now.

This is a huge win for the girl whose cuffing season boyfriend didn't make it until Christmas, and all she wants is his dad's Netflix password back. This is a monumental triumph for the passive-aggressive roommates (maybe somebody kept spilling spaghetti on the floor and it became a whole thing) who are now forced to properly co-habilitate due to the lower temperatures. This is simply awesome when you end up at your parents' house with nothing to talk about, and you remember there's still one show that you can all bond over.

Really, things have been rough on all of us, whether you have streaming access or not, and there's something very soothing in knowing we can once again expect Friends in a regular time slot, just waiting for us to get home. Being able to count on them being there for us — whether it's not our day, or week, or month, or even our year (because it hasn't been) — definitely injects a sense of normality. If nothing else, it'll take you back to a simpler time, a place when both the New York-based show and the channel were in their prime: the '90s. And OK, some of the early 2000s was also begrudgingly good, just by comparison.

So, get some sandwiches at the ready and spend some quality time with your friends and MTV this season. You're welcome.