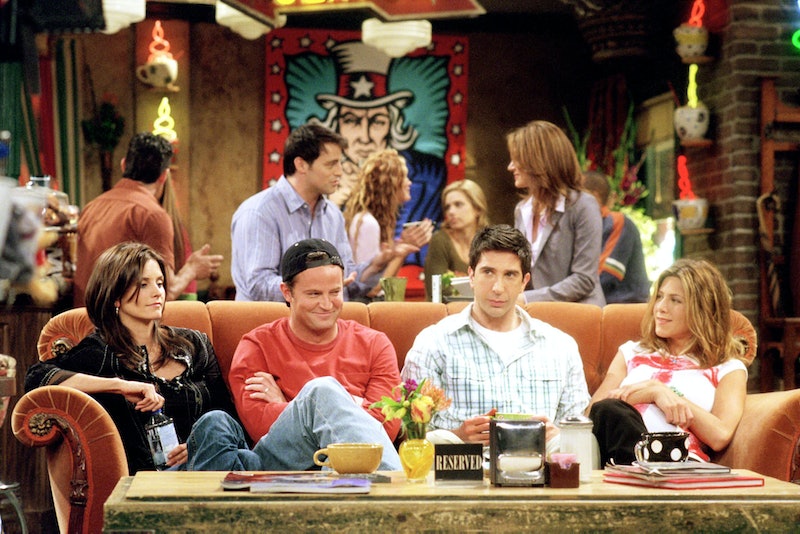 More than any other modern network sitcom, Friends heavilyrelied on the appeal of its ensemble during its television run: Not as a comic force, but as a community, calling envy from any and all watching. The clever, cheeky, responsibility-absolved, attractive group commanded a decade of top broadcast numbers, thanks primarily to the show’s success in advertising their group as something we all wanted to be a part of. We loved watching Chandler and Monica, rooting for Ross and Rachel, wishing we could live amongst Phoebe and Joey…but did we ever really consider what it’d have been like to spend time with these people?

In truth, it might not be half as much fun as the 22 minutes a week allotted toward observing their libation sittings and occasional sexual escapades. And not simply because all people grow tiresome after a while (although we do), but because the core six in Friends is marked by some severely dislikable behavior.

Think about everything you’ve ever witnessed of the gang: Ross’ relationship follies, Phoebe’s eccentric asides, Chandler’s relentless quipping. They might make for entertaining viewership, but would any of these behaviors pass in real-life company? Hard to say. So, instead of assessing who your favorite character is, take a second and entertain the question: which of the Friends characters would be most (and least) likable in real life?

To those only familiar with the early episodes of Friends (as if there’s anyone left who hasn’t watched the entire series), Rachel Green might come off as spoiled, immature, and vacant of true character. But the charm of Rachel is that she is the only one of the characters who embarks upon a bona fide arc: she grows up. And as she does, she showcases some of the most benevolent and heartfelt behavior the series offers.

She makes great effort to assimilate herself within the eccentric group of Manhattan oddballs into which she falls during the events of the pilot, and she warms up easily to people who don’t entirely make it easy (Joey hits on her, Chandler showers her with sarcasm, and Phoebe is intrusively weird). 'A' for effort, Rachel.

If we were only to assess the Friends on the behavior exhibited in the first half of their series’ run, Monica would be at the top of the list — no contest. For the first five seasons and change, Monica battled her own troublesome neuroses with class while managing to play compassionate caretaker for her louse of a brother, estranged high school chum, meddlesome neighbors, and whatever Phoebe is to her.

Unfortunately, Monica went sour — and hard — in the second half of the series, growing shrill and materialistic. Her tireless carping in latter episodes takes Monica’s likability down a few pegs. (She’s still leagues better than most of her friends, however.)

The abrasiveness of Chandler’s tireless sharp tongue is undercut just a tad by his palpable vulnerability. That you know instantly upon meeting Chandler how sensitive an open wound he is helps to make his nonstop barrage of obnoxious jokes all the more palatable. Still, he’d be kind of annoying in real life, especially in situations of intense emotional drama…or high-stakes crises…or awkward social encounters…or simply when someone else is trying to be funny…okay, he’s a pain in the ass.

Phoebe is a character who, like Monica, is far better served by the first half of her small screen tenure. In the early days, Phoebe’s eccentricity is endearing. She’s organically quirky, perhaps delightfully naïve to the distance set between our world and hers. But in the later years, we feel Phoebe becoming more and more aware of this gap…and more and more protective of it. Even when she loses her odd touch, Phoebe still makes it a point to ensure that everyone knows how different she is, and how much better she deems herself than the rest of us as a result.

Joey is dim. Very, very, very dim. Joey is insultingly dim. Joey is the kind of dim that insists upon its own sustenance. The kind of dim that rejects any sort of illumination, seeming instead to celebrating the darkness in which it revels. Why? Because it’s easier that way. It’s easier to stay aloof, stay ignorant, stay dim. Joey might have a good gag every now and then — “The point is moo” is pretty funny, I must say — but a five-minute conversation with a real adult human being like this would drive you mad.

It’s a bit of a shame that the most decent human being among the bunch (Rachel) had to end up with the least decent human being amongst the bunch — this guy. (In fact, I'm not even sure you can call Ross a human being, because I'm convinced he's actually some sort of hominid cryptid the paleontological community has been hiding from the rest of us for these past 20 years.) Ross is selfish, bullheaded, callous, infantile, rude, demanding, attention-starved and a furtively unenjoyable person to be around. I do not mean to belittle the many heartbreaks that Ross has faced — breakups, divorces, and spiritual emancipation from your child are all tough things to deal with. But take some damn responsibility, Ross. You’re an adult, a father, and a doctor. Grow up. And stop screaming!