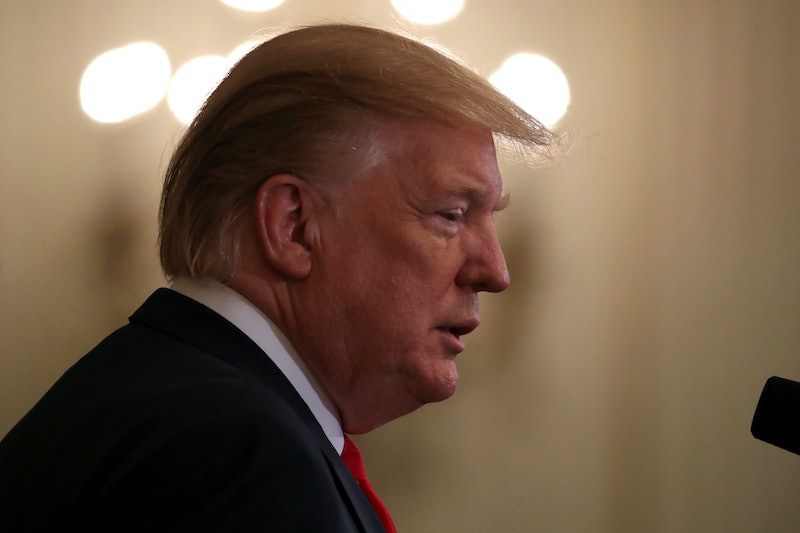 Amid a cloud of scrutiny, the Justice Department released a redacted version of Special Counsel Robert Mueller's report on his Russia probe Thursday. In nearly 450 pages, the special counsel's team laid out the process and findings of the investigation into whether President Trump's 2016 campaign coordinated with Russia to influence the election, and certain quotes from the Mueller report are particularly revealing.

Attorney General Bill Barr held a press conference early Thursday, just hours before the release of the report, to explain the findings of the investigation. Curiously, Barr also argued that those reading the report should put it in context: Trump "was frustrated and angered by a sincere belief that the investigation was undermining his presidency, propelled by his political opponents, and fueled by illegal leaks," Barr said, and suggested that the president therefore had no "corrupt intent to obstruct the investigation."

There were plenty of questions about what exactly Mueller and his team discovered in the investigation. Barr's four-page summary of the report to Congress after the investigation ended in March perhaps raised more questions than it answered. He stated that the investigation did not find any evidence of collusion between Trump's campaign and Russia, and that investigators "did not draw a conclusion" on obstruction of justice. Per The New York Times, Barr himself also determined that "the evidence developed during the special counsel’s investigation is not sufficient to establish that the president committed an obstruction-of-justice offense."

With the release of the full Mueller report on Thursday, these key quotes in the document paint a more complete picture of the investigation.

"While This Report Does Not Conclude That The President Committed A Crime, It Also Does Not Exonerate Him"

The evidence we obtained about the President's actions and intent presents difficult issues that would need to be resolved if we were making a traditional prosecutorial judgment. At the same time, if we had confidence after a thorough investigation of the facts that the President clearly did not commit obstruction of justice, we would so state. Based on the facts and the applicable legal standards, we are unable to reach that judgment. Accordingly, while this report does not conclude that the President committed a crime, it also does not exonerate him.

"This Is Terrible. This Is The End Of My Presidency"

According to notes written by Hunt, when Sessions told the President that a Special Counsel had been appointed, the President slumped back in his chair and said, "Oh my God. This is terrible. This is the end of my Presidency. I'm f*cked." The President became angry and lambasted the Attorney General for his decision to recuse from the investigation, stating, "How could you let this happen, Jeff?" ... The President returned to the consequences of the appointment and said, "Everyone tells me if you get one of these independent counsels it ruins your Presidency. It takes years and years and I won't be able to do anything. This is the worst thing that ever happened to me."

[Former White House communications director Hope] Hicks, for example, said that the President-Elect viewed the intelligence community assessment as his "Achilles heel" because, even if Russia had no impact on the election, people would think Russia helped him win, taking away from what he had accomplished.

"The President’s Efforts To Influence The Investigation Were Mostly Unsuccessful"

The president’s efforts to influence the investigation were mostly unsuccessful, but that is largely because the persons who surrounded the president declined to carry out orders or accede to his requests ... soon after he fired Comey, however, the President became aware that investigators were conducting an obstruction-of-justice inquiry into his own conduct. That awareness marked a significant change in the President's conduct and the start of a second phase of action. The President launched public attacks on the investigation and individuals involved in it ... while in private, the President engaged in a series of targeted efforts to control the investigation.

The President's draft termination letter [firing former FBI Director James Comey] also stated that morale in the FBI was at an all-time low and [Sarah Huckabee] Sanders told the press after Comey's termination that the White House had heard from "countless" FBI agents who had lost confidence in Comey. But the evidence does not support those claims. The President told Comey at their January 27 dinner that "the people of the FBI really like [him]," no evidence suggests that the president heard otherwise before deciding to terminate Comey, and Sanders acknowledged to investigators that her comments were not founded on anything.

At approximately 2:40 a.m. on November 9, 2016, news reports stated that candidate Clinton had called President-Elect Trump to concede. At [REDACTED] wrote to [CEO of the Russian Direct Investment Fund Kirill] Dmitriev, "Putin has won."

While it may be more difficult to establish that public-facing acts were motivated by a corrupt intent, the President's power to influence actions, persons, and events is enhanced by his unique ability to attract attention through use of mass communications. And no principle of law excludes public acts from the scope of obstruction status. If the likely effect of the acts is to intimidate witnesses or alter their testimony, the justice system's integrity is equally threatened.

"Congress Can Permissibly Criminalize Certain Obstructive Conduct By The President"

Under [the Office of Legal Counsel's] analysis, Congress can permissibly criminalize certain obstructive conduct by the President, such as suborning perjury, intimidating witnesses, or fabricating evidence, because those prohibitions raise no separation-of-powers questions. The Constitution does not authorize the President to engage in such conduct, and those actions would transgress the President's duty to "take care that the laws be faithfully executed."

The manner in which the President acted provides additional evidence of his intent. Rather than rely on official channels, the president met with [former campaign manager Corey] Lewandowski alone in the Oval Office. The President selected a loyal 'devotee' outside the White House to deliver the message, supporting an inference that he was working outside White House channels.

"The President Had Asked Him To 'Do Crazy Shit'"

[Former White House counsel Don] McGahn's clear recollection was that the President had directed him to tell Rosenstein not only that conflicts existed but also that "Mueller has to go." ... In response to that request, McGahn decided to quit because he did not want to participate in events that he described as akin to the Saturday Night Massacre. He called his lawyer, drove to the White House, packed up his office, prepared to submit a resignation letter with his chief of staff, told [Reince] Priebus that the President had asked him to 'do crazy sh*t,' and informed Priebus and Bannon that he was leaving. Those acts would be a highly unusual reaction to a request to convey information to the Department of Justice.

"Firing Comey Would Qualify As An Obstructive Act"

"Some Of The Individuals We Interviewed ... Deleted Relevant Communications"

The Office learned that some of the individuals we interviewed or whose conduct we investigated—including some associated with the Trump Campaign—deleted relevant communications or communicated during the relevant period using applications that feature encryption or that do not provide for long-term retention of data or communications records ... the Office cannot rule out the possibility that the unavailable information would shed additional light on (or cast in a new light) the events described in the report.

To get the fullest understanding of what the Mueller report goes into, of course, you'll have to read it yourself. But if you decide to do that, just remember that what's hiding between Barr's pages of redactions could offer some highly illuminating information.