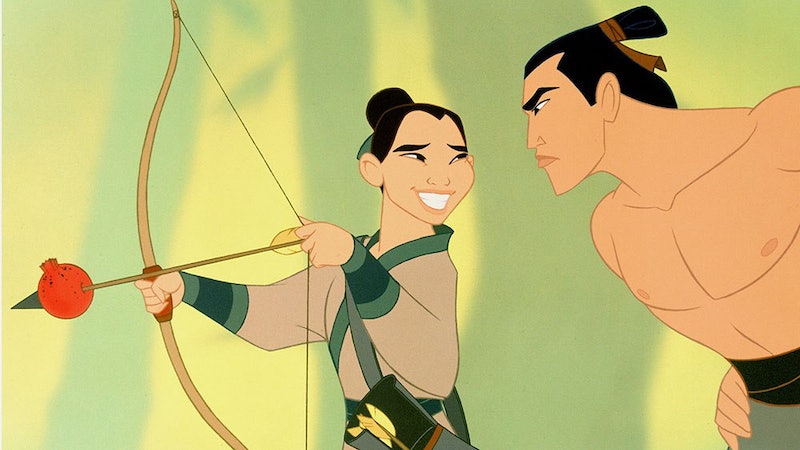 For countless women who grew up in the '90s, there were few movies as formative in shaping our feminism as Mulan. Disney's 1998 animated film was, for so many of us, the most empowering kids' movie we'd ever seen; the story of a Chinese teen who disguises herself as a man in order to fight in the war, Mulan was one of the first Disney films to let its female protagonist be a true heroine, not a damsel in distress. And so, naturally, there are high expectations for the upcoming live-action Mulan, to be just as impactful — a responsibility that director Niki Caro is taking extremely seriously.

"This is every girl’s story, isn’t it?" the filmmaker says, speaking to me via phone in late March. "They don’t grow us up to be heroes in the world... we learn it in our own lives."

Caro, known for female-led films like Whale Rider and this year's The Zookeeper's Wife, is a fitting choice to lead Mulan, and she's excited — if nervous — for the challenge of bringing one of Hollywood's most-loved animated films to live-action life. "I’m absolutely thrilled to be telling that story," she says. But, she adds, "of course" it's a daunting task — "because I feel the responsibility to satisfy as many [people] as possible."

Caro has already had a taste of the protectiveness fans have for Mulan, when comments she made to MovieFone in March about the lack of music in the remake sent the internet into a frenzy. The director quickly cleared up her statements, telling the LA Times that "no decision has been made" about what songs may or may not be included in the film, and she tells me now that while the filmmakers are "still exploring the role that music’s going to play in the movie, for sure, there’s gonna be music."

Fans may be appeased for now, but with a remake this highly anticipated, chances are high that this won't be the last time Caro will need to jump in to reassure loyal Mulan viewers that the update is in good hands. The director is focused on the filming — "I’m within a studio that is very, very good at this and they take special care of these remakes," she says — but she's all too aware of how much pressure there is for her to make a well-received film. Not only is Mulan a remake of a classic, but it's a rare female-led action story, with an even rarer female director at the helm. Caro is one of just four women — alongside Ava DuVernay, Patty Jenkins, and Kathryn Bigelow — to direct a live-action movie with a budget of over $100 million, a statistic that's a source of both pride and frustration for the Mulan filmmaker.

"We’re incredibly honored and it’s a wonderful opportunity," says Caro, speaking for her fellow women. "I am horrified by the statistic, though, that there are so few of us in that club. It should have been 40 women, or 400 women."

Amen. As troubling as that number is, though, it's uplifting to see how much of an impact Caro is making on Hollywood using the influence she has. Her films Whale Rider and North Country earned strong reviews, with the former becoming New Zealand's most financially successful film ever. The director's newest film, The Zookeeper's Wife, keeps in theme with the others, telling the story of a real Polish woman who, along with her husband, ushered hundreds of Jews to safety during World War II. It's a powerful story, but, until the publication of the 2007 book the film is based on, not one known by many people — a fact that Caro sadly attributes to its female-led narrative.

"Like most people in the world, I had never heard the name Antonina Zabinski, let alone the role she played in history, and I was so shocked and surprised that I had never heard this story before," the director recalls. "I wonder whether the fact that it’s a woman’s experience of war made it slip through the seams of history because history has regarded, as we know, the female experience as maybe less than relevant to the male experience."

Thankfully, The Zookeeper's Wife, in theaters now, lets its heroine (Jessica Chastain) take center stage. Using the zoo she runs with her husband, Antonina risks her life to get persecuted Jews out of war-torn Warsaw, and her efforts eventually helped save over 300 people. It's a moving tale of bravery and perseverance, and in Antonina, audiences looking for inspiration are provided with a new, real-life hero to emulate.

In other words, Antonina is just the latest in the chain of bold, impressive leading ladies brought to on-screen life by Caro. And certainly there will be plenty more down the line, in movies not yet made; when it comes to showing women as heroines in film, the mom of two tells me, "we have to do it for our daughters." So she is, one empowering, record-shattering movie after another.