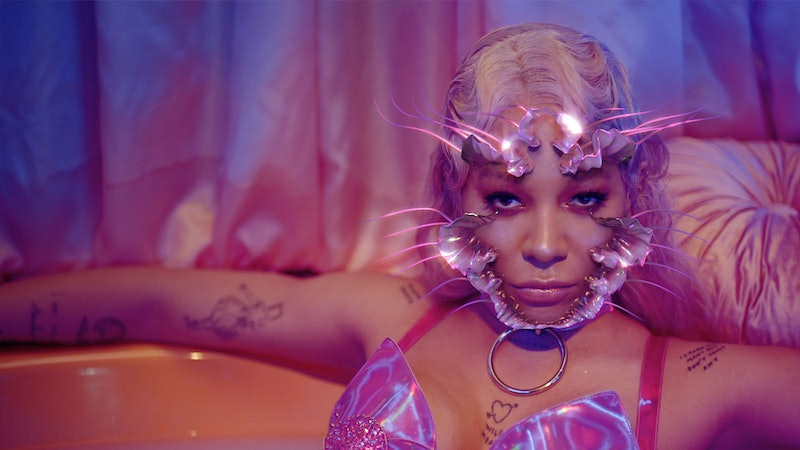 One of the most prominent trans voices in the mainstream media right now is model and activist Munroe Bergdorf. She literally does the most. With style that’s out of this world and a bomb social media presence, she highlights how phenomenal the trans community is and the discrimination and prejudice that trans people still face. So, her most recent creation in aid of trans visibility was of course essential viewing. Must Be Strong shows the struggles that trans individuals face. With an amazing pastel aesthetic, glitter, and a really important message it's a serious must-see.

Bergdorf stars in the short film which was directed by Femke Huurdeman and produced by CANADA London. At the start, Bergdorf can be seen taking pictures of herself with tears glued to her cheeks, struggling with how she looks. She then gets into a pastel pink pool of water to emerge as a beautiful mermaid. The film is incredibly powerful and Bergdorf looks straight up fierce in her glittery tail.

Spreading messages about self-love, acceptance, and power is so important. Must Be Strong highlights how resilient the trans community is despite facing battles internally as well as hatred and misunderstanding from wider society. But even if you aren't trans, you will still be able to relate to the important themes explored in the film.

In a statement about the project sent to Bustle, Bergdorf said, “Must be Strong is a film to celebrate International Trans Day of Visibility but it is also about the ever increasing social pressures on us all. From unattainable beauty standards, to the seemly never-ending onslaught of transphobia in the press. This film is about choosing yourself in a time of uncertainty and self-doubt to become the person you always wanted to be, something that I'm sure most people can relate to.”

Not only does Must Be Strong spread a super encouraging message, it's also a creative achievement. Bergdorf collaborated with creative directors Eduardo Fitch and Lisa Turner-Wray to bring her dreamy mermaid creation to life. This isn’t the first time the trio has worked together either. On Boxing Day 2018 Bergdorf dropped The Qweens Speech where she delivered her own version of the Queen's Speech, drawing attention to the injustices affecting the LGBTQIA+ community. If you haven’t seen it yet, I urge you to check it out — it will give you life.

Explaining why she chose the mermaid imagery Bergdorf said, “The mermaid, a mythical creature is a manifestation of fierce beauty and strength. In one way or another we are all mermaids navigating rough seas. I want this film to be a reminder that no matter what those struggles may be, our differences unite us-especially in today's society where we are all exposed to such high expectations and demands.”

From writing for national publications to being the face on national campaigns Bergdorf is such a shining light of positive change. She speaks out about trans rights, issues that face the LGBTQIA+ community at large, race, white privilege, and diversity. She said in a statement, “in one way or another we all transition. Being our authentic selves takes work, strength and determination, especially in a society where gender, racial and sexual oppression still exists.” She continued:

“We wanted to make a film that not only visualises the difficulties that trans people may face when it comes to body image such as gender dysphoria, but also to show that these are hurdles that we all face as humans, especially as women and marginalised communities.”

There is no denying that Bergdorf is a one phenomenal women who is out there doing her very best to spark change and make the world a little bit better. The messages of self-acceptance, recognition, and celebration in Must Be Strong are so important, not just on International Trans Visibility day but every day.