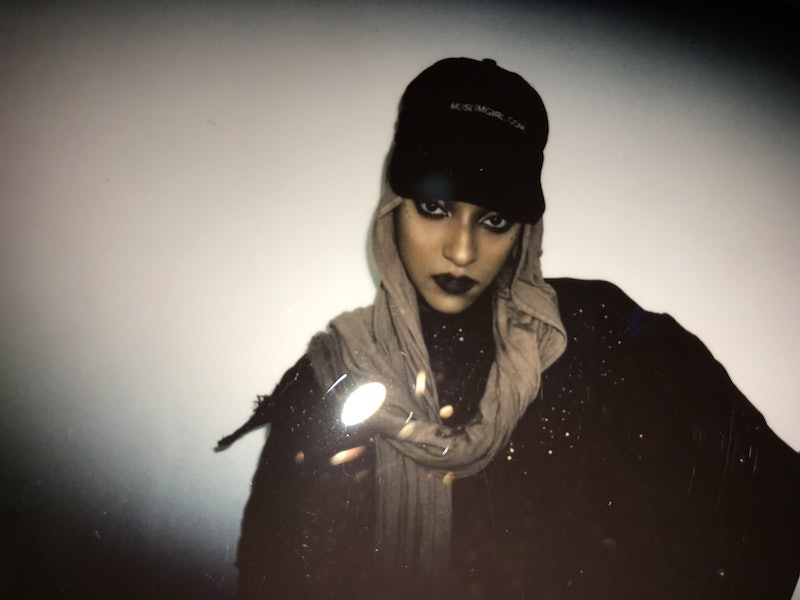 Muslim Girl is an online publication launched from the bedroom of a Muslim high schooler who wanted to challenge popular ideas of Islam and reclaim the narrative around Muslim women. Founder Amani Al-Khatahtbeh aims for the site to give Muslims women a platform to share their stories and to push back against the negative news coverage of the Muslim community

"We are taking back the narrative. We use our own voices to speak up for ourselves," Muslim Girl's site reads. "We are raising the place of Muslim women in mainstream society. We are drawing awareness to the Qur’an’s message of gender equality and Islam’s principle of peace. We are paving the way towards a world in which every woman can raise her head without fear of being attacked for her gender or beliefs."

And the website's newest hat collection promotes that undeniably feminist message. The premise of The Aura Shield Collection is to "#protectyouraura," including a set of black capswhich "say what's in our heads... on our heads." The hats feature Muslim feminist sayings meant to empower those who wear them.

These hats are meant to be an extra layer of protection for Muslim women dealing with harassment by sitting on top of their hijab, and they feature slogans that are meant to give encouragement and strength to the wearer.

Slogans like "Lower Your Gaze" highlights how people unfamiliar with Islam misconstrue the hijab as a way to help men avoid temptation, when the onus in Islam is actually put on men to control their urges.

There is also "Don't Touch My Hijab," which highlights the rise of assaults against veiled Muslim women over the past few years. "End Wallah Bro Culture," alludes to the Muslim version of a "fuck boy," and "Not Your Token Hijabi" reminds the world that Muslim women are more than just their head scarves.

There are also two cap options that are direct nods to the Muslim Girl site. The "#Fire" cap eludes to the #Fire vertical on the website, which is a celebration of Muslim women, their accomplishments, and their leadership. Finally, the "MuslimGirl.com" hat shows support and appreciation of the site itself.

"The collection is meant to instill a level of confidence and belonging to the wearer​ and give a little extra protection against — and a response to — the typical negative vibes that are directed our way as Muslim women in today's society," Al-Khatahtbeh shares with Bustle.

The collection debuts this holiday season, and you can be the first to know when it is available if you sign up for their email list. Check out the options below.