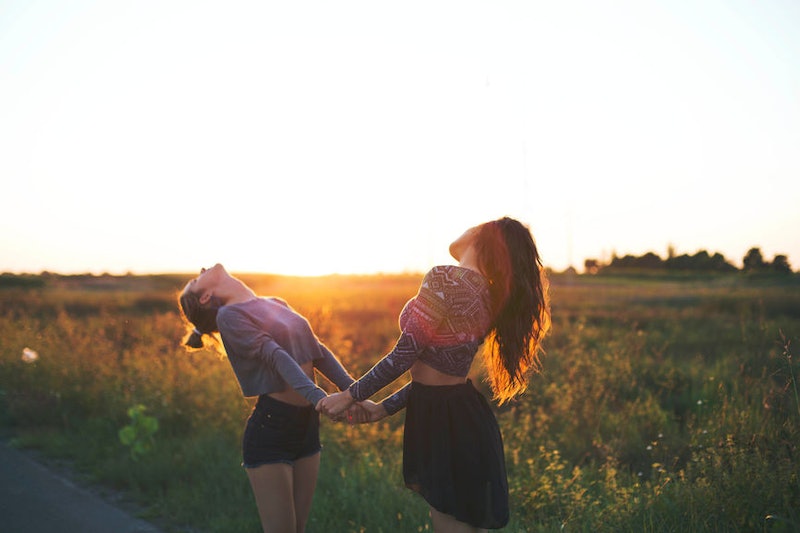 Beth ended our relationship with an email. It was succinct and unsentimental. It was neither dramatic nor peaceful. Or maybe it was both:

I don’t feel like talking. I need space from people to focus on myself. I wish you the best.

I read it multiple times. I forwarded it to mutual friends. I thought about calling her mother. I recited it to my therapist. I discussed it at length with my husband, who told me not to read into it. I ignored him and read into it anyway. She wrote it under duress. She had joined a cult. She’d been brainwashed by her new husband. Were we on a break or breaking-up?

Beth wasn’t my significant other in the traditional sense, but she was in the sense that we’d been best friends for 20 years. From the ages of 13 to 33 to be exact. If our friendship was depicted in a movie montage, it would be heavy on locations and expensive to shoot. It would include snippets of slow dancing with our dates on prom night, decorating the walls of our college dorm room, and being teary-eyed bridesmaids in each other’s weddings. We loved Cyndi Lauper, so Time After Time would have been the preferred soundtrack.

She wrote it under duress. She had joined a cult. She’d been brainwashed by her new husband. Were we on a break or breaking-up?

We came together the way most teenaged girls come together: bonded by our respective crushes on boys who had no interest in us. We were victims of unrequited love, and we enabled and emboldened each other. Most of my memories of high school consist of lounging in Beth’s dimly lit bedroom, listening to Jewel when we were feeling melancholy and The Violent Femmes when we were feeling rebellious. I wanted to be a writer and she wanted to be an artist. We both knew she had more talent than me, but none of my drive. I thought if we could merge into one person, we’d probably have a Pulitzer and a show at the MOMA. We made high school more bearable by writing each other “fantasy notes.” They were letters about our fake high school lives — a world where clear skin was attainable and aloof stoners were ripe for the picking.

Beth had more influence on me in those days than I had on her. She convinced me that shopping at thrift stores was much cooler than shopping at The Gap. She taught me that school spirit was embarrassing, and that cynicism was all the rage. She hated our hometown of San Jose, California and despised most of the people at our high school.

“But Nicole’s so nice,” I would say, in defense of a fellow classmate.

“Anyone can be nice, Sara,” she’d say in return.

She taught me that school spirit was embarrassing, and that cynicism was all the rage.

I was the idealist and she was the realist, but the opposite was true when it came to men. Romantic love was Beth’s Achilles’ heel, and I was her stable shoulder to cry on. Whether it was the exchange student who moved back to Germany or the college crush who strung her along or the live-in boyfriend who abruptly told her to move out of their apartment, I would be there to dutifully pour the wine and tell her she’d dodged a bullet. As a teenager, I found the process exhilarating. As an adult, I would come to find it exhausting.

My first mistake was following Beth to college. UC Santa Cruz was too sleepy and isolated for my taste, but being near the ocean suited her. She teased me relentlessly for skipping parties to write my papers and to study for finals, but college tuition put a financial strain on my immigrant parents, and I wanted to get the most from my education. Our cramped dorm room could barely accommodate two twin beds, and yet I felt the chasm of adulthood making its way between us. I didn’t like Beth’s new friends, I grew bored at drum circles, and I desperately wanted to live in a city. I didn’t like feeling uptight and prudent next to her. It was time to leave the nest.

Our cramped dorm room could barely accommodate two twin beds, and yet I felt the chasm of adulthood making its way between us.

From there, our friendship was a series of departures and arrivals. I transferred to UC Berkeley, and she stayed in Santa Cruz. I moved to New York City after college, and she moved to Los Angeles. She didn’t like e-mail, so we spent hours catching up on the phone. When my job in New York transferred me to LA, we decided to live together with another close friend from college. Some nights, the three of us camped out in the living room, and talked till our eyelids drooped. Other nights, I was the grumpy den mother who needed peace and quiet to function at my corporate job. Eventually, I moved out and got my own apartment. Admitting I wanted to live by myself felt like a small act of betrayal, but it provided a necessary boundary. In the years that followed, our friendship thrived as we celebrated each other’s engagements and career accomplishments and weddings.

I remained the shoulder to cry on when Beth’s husband suffered a nervous breakdown, and she made the difficult decision to leave him. I was proud of her for starting over, and supportive when she dived into a new relationship with an aspiring actor, who nurtured her creative side. Together, they built a coffee table out of a wire spool that they wheeled home from a construction site. I thought they were perfect for each other, but after a brief rough patch, he ended their relationship. I helped her move out of their apartment, and listened rapt, as she read a three-page, scorched earth tome, that she’d written him. There was nothing succinct or peaceful about the letter. I kept her wine glass full, bit my tongue, and suggested she enjoy being single for awhile.

I was proud of her for starting over, and supportive when she dived into a new relationship with an aspiring actor, who nurtured her creative side.

A few weeks later, Beth had another boyfriend. He was eight years her junior, and had already moved into her new place. They had said the “L word,” and she was smitten. She took care of their finances. She cooked their meals. He didn’t have a drivers’ license, but she didn’t mind driving him to and from work in LA traffic. She liked feeling needed.

This time, I told her I was worried and made no attempt to hide the disapproval in my voice. I thought she was rushing into things, but she didn’t see the point in waiting.

“Anyone can be nice,” I thought of reminding her.

They eloped in Las Vegas without telling anyone. They decided to move back to the Bay Area and live with her mom until they saved enough money to get their own place. She was nervous to tell me about their plan, but I was secretly relieved that she was leaving. History had proven that distance was good for us. As the weeks passed, she left me voicemails to say that she was miserable and that she missed me. I called back to return the sentiment, and we played phone tag. She became less responsive. I got worried. And then I got her email.

In Sex and the City, Carrie Bradshaw famously gets dumped via post-it note. When she runs into her ex’s friends at a bar, she explains that, “Most women aren't angry irrational psychos. We just want an ending to a relationship that is thoughtful and decent and honors what we had together.”

I never got that from Beth. “I wish you the best,” her e-mail said. That was four years ago. I haven’t heard from her since.

Most days, I’m at peace with our estrangement. I still feel a pang of nostalgia when I see her smiling in my wedding pictures. I find it eerie that she missed my entire pregnancy and the birth of my son. I wonder if she’s still married and whether she has kids of her own. She was never keen on social media, so I can’t feed my curiosity with bits and pieces of her curated life. I’ve finally stopped conducting imaginary conversations in my head of what I’ll say if she begs for my forgiveness. I’ve even come to terms with her reasons for dumping me. As a friend, I was often judgmental and exasperated. I had trouble accepting her choices, because they weren’t the ones I would have made for myself. If I hated feeling prudent and uptight next to her, then I’m sure she hated feeling impulsive and aimless next to me. It would have been so much easier to just be happy for her.

I’ve finally stopped conducting imaginary conversations in my head of what I’ll say if she begs for my forgiveness. I’ve even come to terms with her reasons for dumping me.

Recently, I published a memoir about growing up undocumented in the United States. Beth was one of the few friends that knew about my immigration status. While researching the book, I combed through old photographs and diary entries from my teen years. Beth is in almost every photograph from those days. Her name is on nearly every page of my journals. And now? She’s an apparition, an unsolved mystery, a relic of a bygone era. Our friendship, it turned out, had a shelf life. I’ve moved on, but I’m not sure I’ll ever get over it. Some rejections are far too profound and jarring to forget. And yet, I too wish her the best.

Sara Saedi was born in Tehran, Iran smack-dab in the middle of a war and an Islamic Revolution. She immigrated to the Bay Area with her family in 1982, where they remained undocumented for 20 years. Her YA memoir Americanized: Rebel Without A Green Card was released by Knopf Books for Young Readers in February 2018.