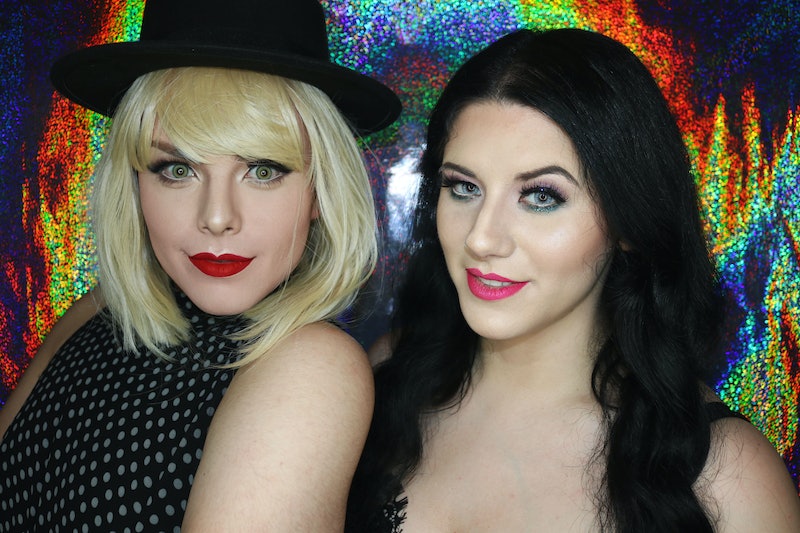 There's no denying that the alleged Katy Perry, Taylor Swift feud is constantly percolating on social media. Did Katy steal Taylor's backup dancers? Did Taylor write "Bad Blood" about Katy? There's no way to know the truth without statements from the pop stars — and thankfully, it doesn't matter. After all, feuds are so 2016, and we're all about the love. So my BFF Richard and I decided to transform into Katy and Taylor to prove that we're stronger working together than fighting as foes.

Speaking of my BFF: His name is Richard Schaefer, and he's a very talented, certified makeup artist. Richard is well-known in MUA communities for his unbelievable Disney princess transformations, and he was the only one I would turn to when deliberating this ambitious transformation. He also makes an amazing T-Swift. I myself have never tried to transform into a celebrity before. I've barely let anyone even do my makeup. But if anyone could attempt and succeed at this massive task, it's Richard.

Make Up For Ever Water Blend Foundation, $43, Sephora

First, it was all about turning me into Katy Perry. To make Richard's life easier, I applied my normal complexion routine, which consists of Sephora Collection Beauty Amplifier Afterglow Primer, Make Up For Ever Water Blend Foundation, Lancôme Teint Idol Concealer for face, and Hourglass Vanish™ Seamless Foundation Stick as my under eye concealer. I set with Laura Mercier Translucent Setting Powder to lock everything in place.

Richard started by mapping out my brows with an angled synthetic brush and Anastasia Beverly Hills Dipbrow™ in Medium Brown.

Because Katy Perry's brows are a bit thinner and less severely arched than mine, he also used peach color corrector and concealer from the Sephora Collection Pantone Universe Correct + Conceal Palette to camouflage any unwanted hairs.

Just by sheering out my brows a bit, my facial structure started to look different.

Then, using the same Sephora Pantone Palette and my Kat von D Shade and Light palette, Richard began to sculpt my face to look like Katy Perry. It's truly like painting a 3D canvas. He added strokes of light concealer and dark contour powder to begin reshaping my face to look like Perry's.

Then, Richard started on my eyes. We decided to recreate Perry's look from the 2011 Grammy's because it's relatively recognizable and it involves loads of color.

He began by using various lavender shadows from some Dior and Urban Decay palettes. He brought the shape of the shadow up at the center of the eye to make my eyes appear more rounded rather than my natural almond shape.

He then smoked out my bottom lash line using a variety of green shades from the Urban Decay Full Spectrum Palette.

Then, of course, we had to add some glitter. First, Richard coated my lid with a sheer layer of Violet Voss Glitter Adhesive before patting on a layer of off-brand chunky lavender glitter. Then, he used a small synthetic brush to coat my lower lash line in adhesive before tapping on Violet Voss Siren Fantasy glitter.

To give my eyes definition and lift, Richard lined the upper lashline with NARS Eye Paint in Snake Eyes.

For time and ease sake, I applied my own false lashes offscreen. I made sure to choose a pair that were longer in the center of the eye to, once again, mimic the rounded, Disney princess-ness of Perry's.

Richard very carefully applied Urban Decay's Vice Liquid Lipstick in Menace, making sure to mimic the shape of Perry's lips. Richard recommends using a matte liquid lipstick or a lipstick that's not glossy and not powdery if you plan on overdrawing your lips or creating a different shape.

To give the lips more dimension, Richard tapped a bit of Pat McGrath's Skin Fetish 003 in Nude to the center of my lips. He also applied a small amount or correlating blush to the apples of my cheeks as well.

Now for Richard's Taylor Swift transformation. Let's just say this isn't his first time at the rodeo. When Richard transforms into the singer, he generally opts for her classic look: Neutral shadow with a bold, red lip.

Richard started by mapping out his brows with Smashbox Brow Tech Matte Pencil in Natural Blonde.

Because Richard does transformations like this so frequently, he's shaved off some of his brow so he can draw the arch however he pleases. Because the hair he does have is dark, he covers it with concealer first.

Richard then pats brow powder over the concealer and the brown pencil so the color is consistent throughout.

Richard then covers the bottom half of his face with thick, full coverage Kat von D Lock-It Foundation before applying red color corrector over any areas that would show five o'clock shadow. This neutralizes the slightly blue tone that would show as hair underneath the surface of the skin.

Then Richard applied the same foundation to the top half of his face.

Once the red color corrector dried, Richard applied the foundation once again over the bottom half of his face, so the complexion color was consistent throughout.

Richard began his highlight and contouring process by applying a lighter concealer from the NYX Color Correcting Palette under his eyes, on his chin, down his nose, under his brow, and on his forehead.

He set all the liquid and cream in place with a translucent setting powder. This prevents the contour powder from sticking too much to one area and not blending out properly.

Richard then switched to a fluffier brush to apply the same contour around the perimeter of his face, really focusing on the temples, cheek bones, and jawline.

Just as Richard contoured his face, he also contours the structure of his eye socket to closer mimic Swift's.

Of course, Richard adds a couple coats of mascara before glueing on a set of false lashes.

The lashes really take the look from "nice" to "well, hello there TSwift."

To open his eyes up even more, Richard applies nude liner to his bottom waterline.

To add some life to this look, Richard blended on some rosey, fuchsia blush slightly above the placement of his contour.

Once again, Richard carefully followed the lip shape of his muse when applying his liquid lipstick. He chose a classic, blue-toned red shade, Too Faced Melted Matte Liquified Lip in Lady Balls.

Just see how adorable he is!

Though we know Taylor Swift allegedly thinks these two have problems, and she doesn't think they can solve them...

And that Katy Perry supposedly thinks T-Swift is "'bout cute as an old coupon expired"...

We think the pair would be better off as fierce feminist role models that can support each others' hustle.

Remember, there are always two sides to every story. If the reports are true and there is some kind of feud between the two, perhaps its truly time to bury the hatchet and come together for the good of all pop music. If not, Richard and I are happy to nominate ourselves as your fave BFF icons.