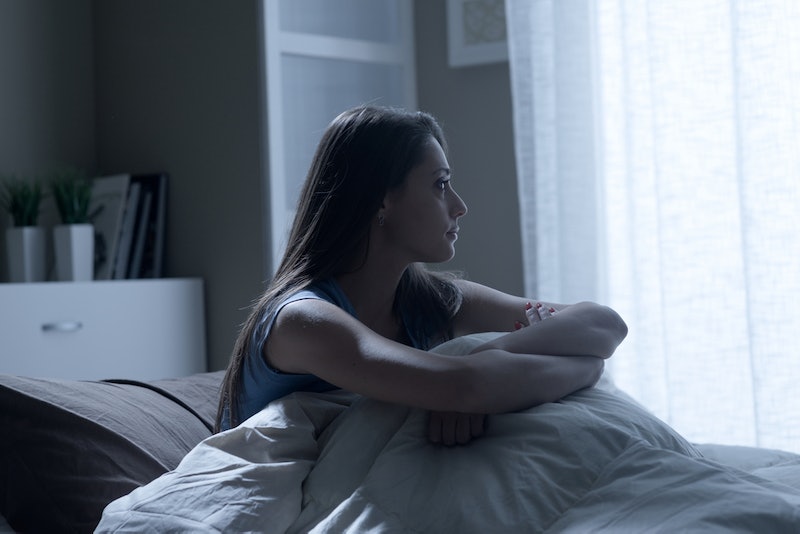 After just one week at a job I loved, I considered resigning because I'd developed a migraine every day from sitting under the fluorescent lights. While starting a new job can be anxiety-inducing for anyone, because I live with migraine headaches, acclimating to a new environment is especially difficult for me.

Each time I enter a new office space I make a mental list of all of the things that could trigger a migraine, like a co-worker's perfume or fluorescent lighting. I also have to make a conscious effort to reduce stress, get enough sleep, eat regular meals, and avoid excessive travel. But because I look fine on the outside, it's hard to explain to managers why I can't take a red-eye, deplane, and immediately start working like my co-workers — and I've even been chastised for not being able to do so. In fact, my career would be totally different if I didn't have migraines because there are certain things I just can't do.

Like many migraineurs, my chronic headaches mean I have to make strategic career choices in order to reduce the amount of headaches I get. "Some migraine sufferers may not consider career opportunities that involve travel, high levels of stress, or irregular work schedules. While this may be a prudent and even necessary decision, it may limit career growth," Dr. Sara Crystal, neurologist, headache specialist, and medical adviser for Cove, a subscription service that connects migraine patients with doctors and sends monthly medication via mail, tells Bustle.

A new survey called My Migraine Voice shared similar findings. "From being afraid to speak up about their disease at work in fear of losing their jobs, to feeling judged by colleagues, the stigma around migraine in the workplace is an ongoing issue that the migraine community faces daily," Mary Franklin, executive director of the National Headache Foundation, said in a press release. "[The findings] showcase the urgent need for employers and employees to change the dialogue around migraine."

The survey reported that migraineurs in the United States miss an average of one week of work per year, though some respondents cited having to miss work as many as five days per month due to their migraines. If you've never had a migraine, it's a throbbing, pulsating headache that can occur on one side of the head and may be accompanied by nausea and sensitivity to light, scents, and sounds. The pain is akin to the worst hangover you've ever had, times 100.

While I've had migraines as long as I can remember, the first time I saw a doctor about them was at age 6 after I'd passed out from the pain and was rushed to the hospital. After that, I remember spending weekends in bed while my mom put ice packs inside of my pillow to help dull the pain. As I got older, I also developed menstrual migraines, which means I'm in for at least two migraines a month, no matter what.

Learning to manage my triggers has been a lifelong struggle. Because I work from home now, I am able to totally control my environment and in turn, significantly lower my chances of getting a migraine. What's more, not having to go to an office means I can usually work if my pain level is less than a five. "Having the option of working from home can be very helpful [for migraineurs]," Crystal says. "It may be impossible to work through a severe headache, but being home might allow one to work with a low-grade headache and avoid workplace triggers that may exacerbate the pain."

Stress is also a major trigger for me. A few years ago, I went through such a stressful experience at work that I had a migraine every day for two months. During that time, I worked with an ice pack wrapped around my head (because I couldn't take two months off work). Eventually, my migraines became so debilitating that I left that job. Crystal says this is not unusual for migraineurs.

"I have had many patients who left jobs that were very stressful, due to the impact the stress was having on their migraine headaches, and their general health," she says. "Often these patients mention managers and colleagues that lacked empathy regarding their headaches."

While most managers probably don't intend to be insensitive to people with migraine headaches, if they've never experienced one, they might think it's "just a headache," when that couldn't be further from the truth. The My Migraine Voice survey found that among U.S.-based survey respondents, only 21% of managers were supportive of employees with migraines, while 30% of migraineurs said they felt judged at work because of their migraines.

I experienced this firsthand at a former job. When I first started, I was thrilled to be assigned to a dimly lit room instead of the main room that buzzed with blinding fluorescent lights, one of my main triggers. After about a year, one of my co-workers complained that room was too dark. Instead of simply moving that person to the brighter room, my manager insisted everyone move. I tried in vain to explain why I couldn't work in a bright room.

Eventually, I had to get a note from my neurologist and explain the Americans with Disabilities Act to my boss. The act states that if at all possible, employers must make reasonable modifications to the usual way of doing things to accommodate people with disabilities. Because migraines interfere with a person's ability to perform simple tasks, the condition is protected under the ADA.

Even though I got to stay in the darker room, the entire experience soured my relationship with my boss. It seemed as if she interpreted my medical needs as a challenge to her authority, and I never felt comfortable at work after that. I found a new job, only this time there was no dim room to work in. As I was figuring out what to do, I looked across the cubicle farm and noticed one person had made their workspace into a dark cave, with blankets overhead to block the light. I'm generally pretty shy when talking to people I don't know, but in this case, I was desperate. I walked over to the cave and asked the person to help me turn my desk into a cave, too. This allowed me to continue working there.

Migraines can be managed with preventative and/or rescue medications, and the My Migraine Voice survey noted that 90% of U.S. respondents reported trying at least one preventative treatment. But aside from medication, migraineurs also have to make their health and wellness a top priority. Because I am stubborn AF, I spent years trying to do things everyone else did, like wear perfume or stay up all night working or hanging out. Eventually, I had to admit to myself that I am not like everyone else, and in order to have as few migraines as possible, I have to set boundaries. This includes making sure I have a flexible work schedule.

While the job where I experienced migraines for two months straight paid me the most money I'd ever made, I learned an important lesson. No amount of money or prestige is worth experiencing a pain that feels like someone is jamming an icepick into my eye. My health is the most important thing, and having fewer migraines has made me happier than any job ever could.