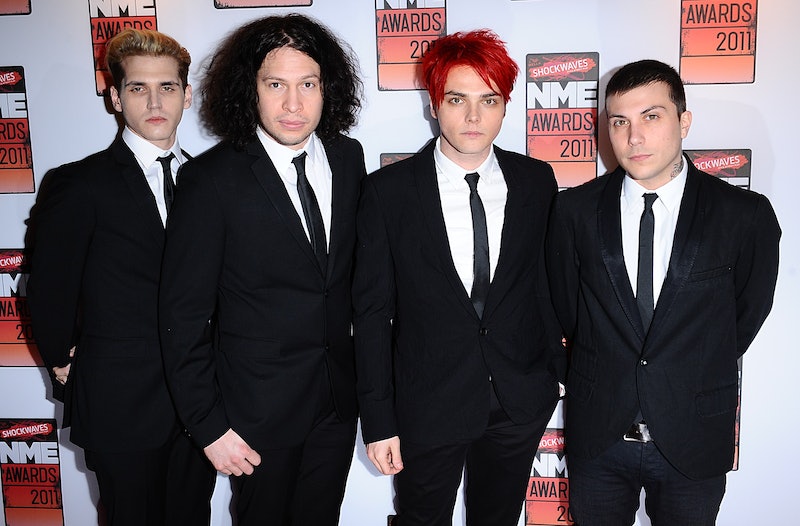 The band is back together and taking their show on the road. My Chemical Romance will tour North America this fall, the group announced on Wednesday, Jan. 29. Kicking off at Detroit's Little Caesars Arena on Sept. 9, MCR's first jaunt across the United States and Canada in nine years will ultimately wrap at the T-Mobile Arena in Las Vegas on Oct. 11. Tickets for all dates will go on sale on Friday, Jan. 31 at 12 p.m. local time, per Rolling Stone, and a complete list of MCR's tour dates is available on the band’s website.

To share the exciting news, MCR dropped a short film called "A summoning..." which they'd previously teased on Instagram. In the Kris Mercado-directed, 13-minute visual, a young man's toying around with an Ouija board sends him on a chase through different realms filled with MCR Easter eggs and nostalgic nods to the band's history. Among them: a re-creation of their Three Cheers For Sweet Revenge album cover, as well as an appearance by the title star of the group's 2009 "Helena" music video. (Band members Ray Toro and Jamie Muhoberac also composed the creepy short's instrumental soundtrack.)

After disbanding in 2013 after 12 years together, the emo icons behind hits like "Welcome to the Black Parade" in October 2019 announced their first reunion show, which was held at Los Angeles' Shrine Expo on Dec. 20. Before they hit the road in North America, MCR will be on tour for previously announced stops across Europe, Australia, New Zealand, and Asia. Among the other acts with whom they'll share the stage as part of the Download Festival are Jimmy Eat World and Evanescence.

The group sparked reunion rumors as far back as 2016 when they posted a cryptic video of a waving flag and the date "9.23.16" on their official website and social media pages. The following year, MCR frontman Gerard Way revealed to Billboard that he wouldn't count a reunion out, but also noted, however, that the rest of the guys were "doing stuff in their lives" that they were "really enjoying."

As Way elaborated to Billboard in June 2017: "In some ways I don't really miss it; It had gotten so big it was very unwieldy. It took a toll on my mental life and personal life. The thing I'm happiest about right now is everybody's relationships with each other are really strong. That's more important than anything else to me."

Then, while promoting the Netflix adaptation of his graphic novel series, The Umbrella Academy in February 2019, Way seemed to shut down a possible reunion tour. "We definitely get offers regularly to reunite — it's a constant thing," he told UK newspaper The Guardian at the time. "It's flattering, it's really nice of people ... I miss playing with the guys, but I don't think so."

Whether or not he was playing it close to the vest or had a change of heart, MCR fans now have at least one less thing to feel emo about.