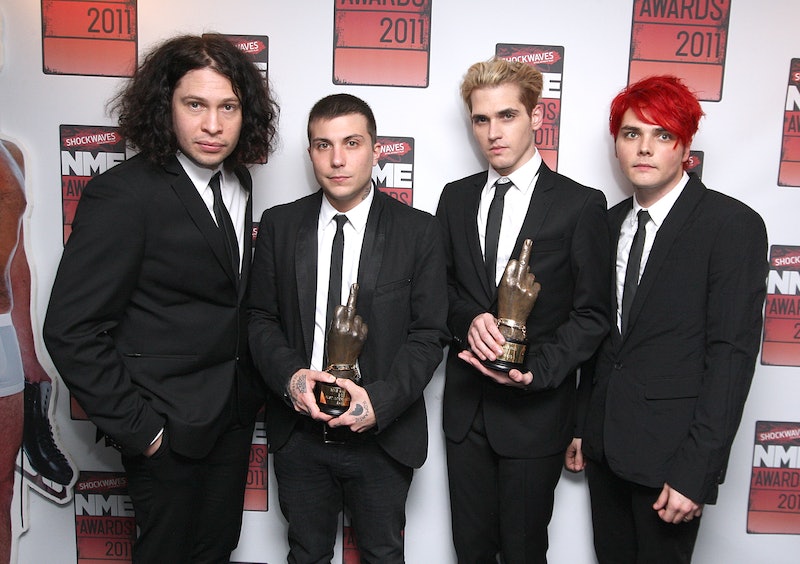 Former emo kids of the world will not be okay once they hear this news. Just a week after they announced the long-awaited end of a years-long hiatus, My Chemical Romance has announced even more reunion shows in Australia, New Zealand and Japan in the spring of 2020. According to Rolling Stone, the beloved emo band has joined the lineup of next year's Download Festival, alongside Jimmy Eat World, with shows on March 20 and 21, in Melbourne and Sydney, respectively.

Following that, they will join Jimmy Eat World for another show in Western Springs, New Zealand on March 25, and My Chemical Romance wrap things up with the Japanese leg of the Download Festival a few days later on March 29, alongside fellow emo stalwarts Evanescence. Fans in the Eastern Hemisphere can get their hands on tickets for the various festival stops from the Download Festival website now, while tickets for their New Zealand show will be available beginning Nov. 9 through Ticketmaster.

On Halloween, My Chemical Romance announced on Twitter that they were reuniting to play their first concert in over a decade on Dec. 20 at the Shrine Expo Hall in Los Angeles. Tickets went on sale the following day, and the show promptly sold out within hours. As of yet, they haven't announced any plans to play any addition shows in North America.

My Chemical Romance broke up in 2013, after 12 years together. Rumors of a possible reunion tour began swirling as far back as 2017, when My Chemical Romance posted a cryptic video on their website and social media pages. A year later, frontman Gerard Way told Billboard that he "wouldn't count [a reunion] out, but at the same time everybody's doing stuff in their lives now that they're really enjoying." In February 2019, however, Way appeared to shut down any possibility of a reunion tour while promoting the Netflix adaptation of his graphic novel series, The Umbrella Academy.

"We definitely get offers regularly to reunite — it’s a constant thing," Way told The Guardian. "It’s flattering, it’s really nice of people ... I miss playing with the guys, but I don’t think so." Though he loved being part of My Chemical Romance, Way also told the outlet that he was happier now that he was done being a touring musician, saying, "I like being super-creative all the time, and, unfortunately, when you’re in a really big band you’re actually doing a lot of boring stuff, like being on the road and missing your family."

Still, during an interview with KISS FM UK in June, Joe Jonas spilled the beans when he let slip that the Jonas Brothers had been rehearsing next door to My Chemical Romance. Though guitarist Frank Iero slammed Jonas' "gossip" on The Zack Sang Show, it appears that the Jonas Brothers frontman was onto something, as the band announced their reunion just a few months later.

Looks like the Black Parade will continue to carry on, just a little bit longer — and this time, it's going global.

More like this
Britney Spears Shares & Deletes Photos Of Justin Timberlake From 22 Years Ago
By Jake Viswanath
Cruz Beckham Teased New Music With An Adorable Nod To Mom Victoria Beckham
By Stephanie Topacio Long
The Spice Girls Are Set To Reunite At King Charles III’s Coronation
By Sam Ramsden
'Friends' Star Maggie Wheeler Offers Support To Matthew Perry After Reading His Memoir
By Alyssa Lapid
Get Even More From Bustle — Sign Up For The Newsletter
From hair trends to relationship advice, our daily newsletter has everything you need to sound like a person who’s on TikTok, even if you aren’t.