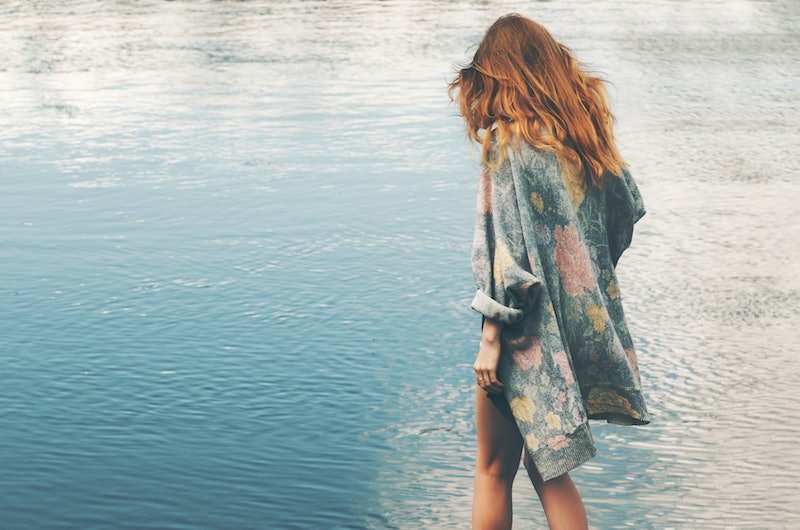 I looked at my dad as he sat on the couch across from me. He was smiling, but there was a bit of uncertainty in his eyes — as though he wondered if he'd be able to feel this calm again without the help of Prozac.

When my father told me he was recently diagnosed with anxiety, I felt a pang of empathy, and there was a lot I wanted to say to him. From a very young age, I knew I had anxiety. My perfectionist tendencies constantly teetered on an all-consuming stress of whether or not I would get things done, if my health was well enough for me to perform at my optimal level, and if things would go beyond my control and veer into the lane of chaos. Then there was my emetophobia, or fear of vomiting, which produced more panic attacks than my anxiety did, often at very embarrassing and inopportune moments that would later become jokes at family dinners. I never found them funny, but if that was the way we would cope with my difficulties, I was willing to try to.

For years, my mother asked me to "find strength" to manage my anxiety, and we'd fight as I tried to explain that it didn't always work like that. Instead of feeling understood, I always left feeling disappointed in myself for not meeting her expectations, and somewhat guilty for putting her through my episodes. My father, on the other hand, would hear our arguing through my bedroom door. An abrupt, almost angry-sounding, "What's going on?" would follow, but I never told him about the fights with my mother, or about why my anxiety left me feeling isolated. I just assumed he wouldn't get it, and that he'd be annoyed with me. I never gave him the space to try to get it. I was too scared.

I stuck my fingers in my ears as my heart began to race, trying to pretend I was anywhere but where I was.

For the longest time I wondered if anxiety ran in families. Was there a tangible thread that connected me and my parents genetically, even if they couldn’t quite understand what I was going through? Was there something I could point to that could concretely explain to them that no, I’m not overreacting, this isn’t something I can control, and you might have the genes for it, too? For a while, the answer seemed to be no. Yes, my father was stuck in his ways, but that was just a family personality trait — we were all bright perfectionists who didn’t stray too far from our comfort zones.

Then, I had a panic attack after my cousin’s wedding. We were in a shuttle taking us back from the venue to the hotel, and the drunkest man at the party got in the backseat. Almost instantly, my fear of vomiting kicked in. My mother looked at me as if to say, “It’s going to be OK,” while simultaneously cautioning me, “Now is not the time to panic.” I stuck my fingers in my ears as my heart began to race, trying to pretend I was anywhere but where I was. My hands shook, and the tears fell involuntarily from my face. I felt utterly, and completely trapped. When we finally arrived to the hotel, I swung the door of the shuttle open before it even had time to stop. Sprinting out of the van as if my life depended on it, I dropped my mother’s bag which I was holding, and lost her phone.

The rest of the night, I remember my parents' disappointment weighing on me. If I could just control my reaction, if I hadn’t sprinted out of the van, my mother wouldn’t have lost her phone. I remember that my dad was profoundly annoyed, and my crying wasn’t helping. I felt so ashamed of myself, because I hadn’t meant for any of that to happen. But of course, I thought, they were thinking rationally — I wasn’t.

Fast forward a few years to when I was in college. My mom called me right after Hurricane Sandy hit, telling me my dad was having a hard time dealing with tight spaces. “He had a panic attack on the train,” she told me. “It was extremely crowded, and he got claustrophobic.”

Of course, I felt sympathy, but I didn't immediately realize why this was significant. Instead, I wrote it off as a one-time thing — it can be hard to feel relaxed on a crowded train. But then my dad’s father passed away, and his panic attacks were no longer an isolated experience. Dealing with my grandfather’s death was hard for my whole family, but my dad's grief manifested itself physically. It wasn't sadness, but a constant worry that took away the silliness everyone loved most about him. He told me he didn’t feel well, and that it was all-consuming. It wasn’t that he was sick, but he wasn’t quite right. It later occurred to me that my dad’s moment on the train was my moment on the shuttle. He was feeling a similar rush of panic, the same need to escape — he knew what anxiety felt like.

When my dad experienced anxiety, he normalized it for himself, and eventually for me.

I’m not going to pretend my father's and my experiences were exactly the same — my dad was later diagnosed with early-onset Parkinson’s, and a lot of his anxiety was later attributed to his drop in dopamine level — but something changed when I finally felt like he understood. It was suddenly like those years of what seemed like disappointment or lack of care had been smoothed over with the balm of shared experiences. He didn’t have to say it, but that day on the couch when he told me what anxiety felt like for him, it felt like he was also saying, “This feeling isn’t your fault. You don’t choose to feel this way, and I’m not choosing it either.”

My father's anxiety prompted my family to think about mental health in a new way. It started to seem like mental health was less of a mystery, and more a thing that can happen to anyone. When my dad experienced anxiety, he normalized it for himself, and eventually for me. He talked about it with such casualness, asking me if my "happy pills" created the same symptoms he was experiencing. We'd joke about it together, but those jokes were no longer at my expense — they showed a more deep-seated acceptance that can only come from going through the same thing.

And that was completely cemented that day in my living room, where he sat on our couch and asked me frankly, “Is this how you’ve been feeling for all these years?”

He smiled again, keeping things light as he always did. “This sucks.”

I nodded in agreement, because there wasn’t too much more to say. Anxiety does suck, and my dad finally understood that.

Bustle’s 'Family Thread’ series looks at the many ways our family relationships and our mental health are connected — and how that shapes us.