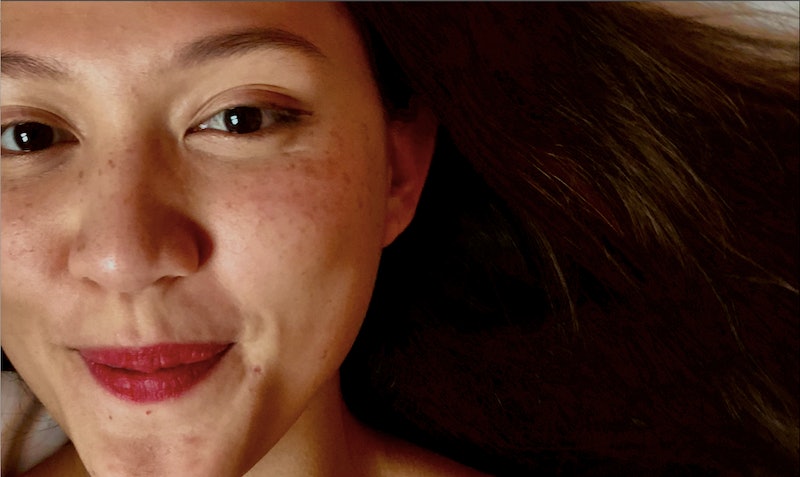 I'm an English, Irish, Portuguese, Sinhalese, Chinese, and Thai mixed-race woman and I often believe I have the best of all those worlds. I've got freckles, almond eyes, and I grew up with some otherworldly fusion foods, like slick sambal fish rolled beside herbed potatoes, and rice soaked with coconut milk and then topped with Heinz ketchup. It was a wonderful thing to have this and that — to speak multiple languages at home in Singapore, to get red packets over Lunar New Year, and sing birthday songs in Portuguese over an Eurasian Sugee Cake.

Even though those freckles never quite made it onto my father's radar, they somehow managed to become my mother's greatest bugbear. When she would come close enough to see my face and my freckles would surface, they were an instant prompt for her to proselytize the use of sunscreens and every brand of melanin-blocking creams. Sometimes she would do this more than once a day: in the morning when I'd wake up, when she caught my face in the reflection of her driver's mirror, then later when she'd pick me up from school.

On one hand, she believed that my freckles were a sign of skin cancer, and so my skin needed to be treated and protected. This, I always believed came down to her motherly instincts, and wanting me to live a long, healthy life. This, I put down in the same category as telling me to eat peas, run from time to time, and take a shower at least once a day. This, I understood.

The other part took me more time to comprehend. She thought freckles were sun scars for the poor, and was herself embarrassed by them. Alas, the truth is that for all that she disliked about my spots, my mother has freckles herself, and she takes great care to hide them.

My mother loved fair skin. Her father was a lifeguard and a firefighter, and his skin was glazed brown from the unrelenting Singapore heat. My paternal grandfather worked in a shipyard, and his skin was burnt just as much. When you live one degree north of the equator, and you labor outside, it shows. As she saw it, the other people who had dark skin were rickshaw drivers, street hawkers, and car washers. On the other, being able to have an office job, put on a buttoned shirt, and go into an air conditioned building every day was a luxury. And so was having skin untouched by the sun.

More than once, in private, she has grazed her fingers over her freckles regretfully and told me, "This is when I was poor and couldn’t afford sunscreen. Now you should make sure you don’t end up like me." Her skin care regimen also reveals how her anti-freckle tirade is not simply because of the threat of skin cancer: along with UV protecting creams, she had all sorts of freckle-erasing serums and skin lighteners.

And this she was determined to impart to me as well. Every morning while waiting in line to drop me off at school, she'd have one hand on the steering wheel and the other patting concealer down over each of my freckles. While the word "freckle" seems to have come from sunnier origins, like "spark" and "sprinkle," my freckles were to be kept in the dark. Lindsay Lohan I was not. I was to appear to everyone masked in concealer cream and sun blocking serums. And when, to her dismay, my freckles grew nevertheless, my mother would tap her finger on the insurgent spots and make a note to herself: “Need more SPF.”

The sheer care and precision of her work was impressive, but it also made me wonder how she must have felt about her own face, and the effort she put into covering up every day.

When I moved away to America for college, and then to Paris after, I also got the audacity to let my skin finally be free. While in my mother's times, having an office job in the young country of Singapore was a sign of privilege, now it seems the luxury lies is having the time to be outside. Sunscreens, I thought, became so passé! People would put aside work and lie around outside all day just to get some semblance of tan. A partner I had nicknamed me “freckles,” and they practically multiplied with the attention.

Last year, a spot pigmentation I had on my face turned red. I had waited for a week, squeezed and prodded at it, and it became inflamed and raised in retaliation. The possibility of getting skin cancer had seemed so remote, more like a bedtime fable parents tell their children than something that I would ever have to concern myself with. But now, I saw all the signs: Mole redness. Raised surface. Crusting. I made an appointment with a dermatologist, who found the raised spot suspicious enough. I had a skin biopsy. It was shaved off. I thought of my mother. I did not tell her.

The results are out. I don't have cancer — it was just a bump gone rogue, the way sometimes you get an acne spot beleaguering the pigmentation on top. It was a relief not only because thank god I don't have skin cancer, but to be honest, I also had no idea how I would ever afford any treatment if I were actually ill.

Maybe I'll put some sunscreen on my face now, but concealer on these sun sparks? Even with such a close shave (pun intended), I decided to let my freckles shine. I see them as a reminder of how my mother and I grew up differently. I, with privilege enough, have lived in different countries and been exposed to a different ideal of beauty as well. I understand her desire to defend me from the sun, but it feels like self-love when I can finally leave my skin bare.

More like this
Fermented Skin Care's Barrier-Boosting Benefits, Explained By Derms
By Audrey Noble
15 Hibiscus Tattoos That Bring Tropical Vibes To Your Body Art
By Paris Giles
Everything You Need To Know About Ephemeral Tattoos
By El Hunt
Everything To Know About Daxxify, The Newest FDA-Approved Skin-Jectable
By Olivia Rose Ferreiro
Get Even More From Bustle — Sign Up For The Newsletter