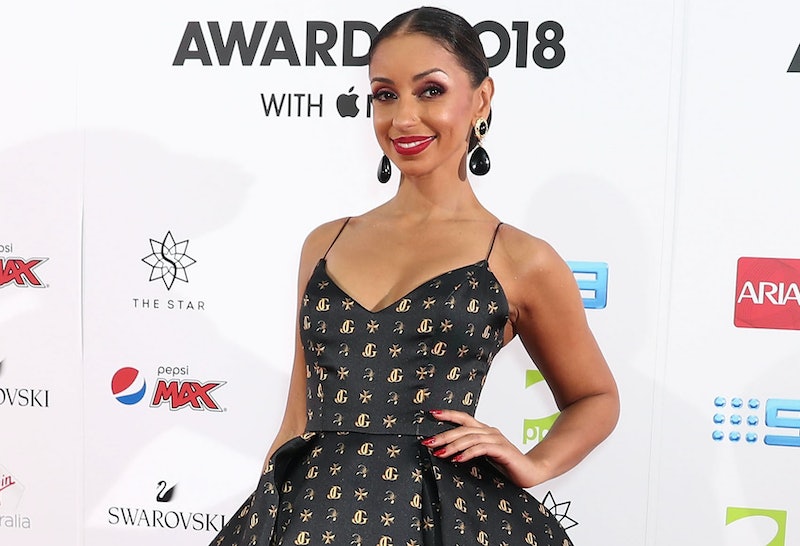 Girls Cruise will have you sailing away with some of the most iconic women in music from the 1990s and 2000s. Mýa joins Lil' Kim and Chilli on the VH1 reality series when it premieres on July 15. Her debut album was released more than 20 years ago, but Mýa in 2019 is still as active as ever. On Girls Cruise, Mýa travels with captain Lil' Kim for a vacation around the Caribbean via yacht with Chilli of TLC, Pretty Vee and B. Simone of Wild 'N Out, actress and model Tiffany Panhilason, and candle entrepreneur Char Defrancesco. And while she might be one of the more mellow cruisers, Mýa isn't shy when it comes to her career or promoting her clean eating lifestyle.

Back in 2001, Mýa and Lil' Kim collaborated on "Lady Marmalade" with Christina Aguilera, Pink, and Missy Elliott for the Moulin Rouge! soundtrack. Now they've joined forces again for the reality TV travel show. Mýa spoke to Essence ahead of the Girls Cruise premiere on July 15 and said that being a part of the show isn't something that she'd normally do, but she's happy she participated in the trip.

"I had already set my intentions for the year, and it was to step out of my comfort zone, and then I got that call," she said about being offered Girls Cruise by Lil' Kim. "I had to fulfill my promise to myself. I made the decision to move forward and say yes because I haven't really treated myself to a vacation in years. I'm glad that I did it."

While she might not have the same level of fame as she had back when she released the albums Mýa and Fear of Flying, sang on Pras' "Ghetto Supastar," or appeared in "Cell Block Tango" in 2002's Chicago, her résumé shows how much Mýa has earned a vacay. (Even one that was constantly recorded for reality TV.) In 2018, she starred in the TV series Fifth Ward on the Urban Movie Channel (UMC) and released a 20th-anniversary album TKO (The Knock Out). She also had released an album the year prior, Smoove Jones, for which she was nominated for Best R&B Album at the Grammys.

Along with filming Girls Cruise, Mýa spoke in her Essence interview how she's already back to creating new music in 2019. She lent her vocals to the Jamaican dancehall singer Ding Dong's song "Hands Free." She also recorded a new upcoming song called "Whine" that she described as "world music mixed with Caribbean" to Essence. So both songs can act as great accompaniment tracks to Girls Cruise.

Outside of her career, Mýa also is a big advocate for vegan and raw eating. She challenges fans on social media to try out this way of eating and provides education on her lifestyle. She even shared her nature-based beauty tips with Chilli in a promo for Girls Cruise. And because of her healthy eating, don't expect Mýa to be partying with alcohol (she said she only drinks red wine for the antioxidants) during the docuseries.

While Mýa said that Girls Cruise wasn't her typical project, she has done reality TV before since she appeared on Dancing with the Stars back in 2009 where she lost to Donny Osmond. But what drew Mýa to Girls Cruise was the pitch from Lil' Kim. "I got a call from Kim and she said, 'Look, Mýa you're a boss. I'm a boss and we've been working for a long time together, as well as on our own individual grind. I'm planning this trip, and it's fabulous,'" Mýa told Essence. "With Kim, it's always over the top and fabulous." So watch the hardworking and boss Mýa get her vacation on in Girls Cruise — and expect the triple threat to keep acting, singing, dancing, and clean eating in 2019 and beyond.

More like this
Everything To Know About 'The Real Housewives Ultimate Girls Trip' Season 4
By Jake Viswanath
Andy Cohen Apologized To Larsa Pippen After A 'RHOM' Season 5 Reunion Dust-Up
By Brad Witter
Twitter Has Renamed Ekin-Su After *That* 'Dancing On Ice' Performance
By Sophie McEvoy
'Love Island' Has Added Yet Another Bombshell To The Villa
By Bustle UK
Get Even More From Bustle — Sign Up For The Newsletter
From hair trends to relationship advice, our daily newsletter has everything you need to sound like a person who’s on TikTok, even if you aren’t.