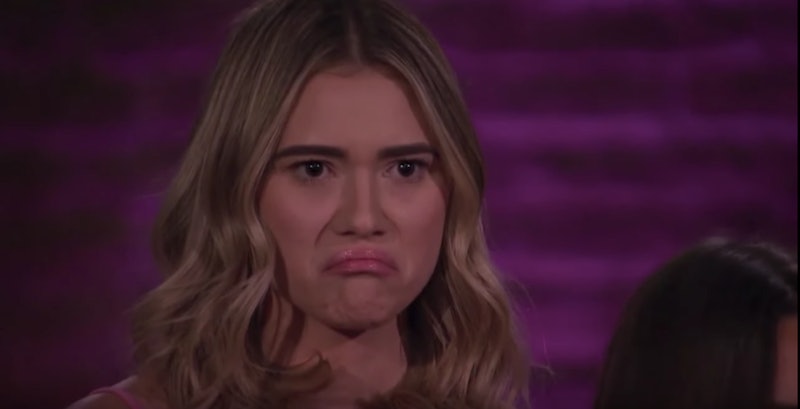 Whether or not you've ever heard of Mykenna from The Bachelor, there's a good chance you've texted her extremely expressive face to a friend. A single GIF of her reaction to being sent home has over 37 million views on Giphy. With that, her "theatrical face," as she calls it, became one of the biggest memes from Peter's Bachelor season — a claim to fame Mykenna wasn't exactly hoping for when she signed up looking for love.

"I never realized I do these weird faces — I guess when I'm stressed out or when I'm overwhelmed, I just can't help it," she tells Bustle. Because Mykenna comes from a musical theatre and dance background, she says her ability to emote so dramatically, "wasn't a surprise. But I didn't think I was going to be remembered [for it]."

Initially, she says watching herself on Peter's season left her "screaming at the TV like, 'Put your tongue in your mouth, c'mon!'" But in time, she learned to laugh it off. Read on to hear what Mykenna was really thinking while making all of those wild facial expressions.

This was Mykenna's genuine reaction to Alayah being sent home... the first time. "I really did feel like I was going to go home and I didn't want to leave yet, and there was a lot of drama at the pool party and I didn't get time with [Peter], so I really was worried," she says. "And it literally shows in my face."

You can thank another particularly tense rose ceremony for this painful-looking move. "Honestly, watching it back and forth, it's kind of making me cringe. I just don't understand my jaw and what it's doing," Mykenna says.

"I think I watched this like 20 times because the promo started coming out, and I could not believe I was doing this," Mykenna says. "I'm pretty sure this is when Hannah Brown got out of the limo and it was a shock to all of us. But the cage with it? It's just hilarious."

This big gulp came in response to — you guessed it — more drama. After Kelsey confronted Tammy about claiming she had a drinking problem, Mykenna told the other women to focus more on Peter and less on each other. "I just said something and was like, 'And that's how I feel about that.'" Cheers!

This is one of many weird tongue moments caught on camera, which Mykenna is just as confused about as you. "I guess I wasn't kissing [Peter] enough, so I had to start making out with myself," she jokes. "I think it was just the drama going on and I just felt like I didn't want to be there ... maybe I'm cleaning my teeth? I don't know."

The only explanation Mykenna can come up with is that she was wearing candy-flavored lip gloss. "I believe it was when Chris Harrison said that [the cocktail party] was canceled," she says. "I really just don't know what my tongue is doing. It doesn't make sense."

This one is from the same episode, also after Chris Harrison's announcement. "I was disappointed and had been arguing a lot. And maybe someone said something that I didn't agree with?" Mykenna guesses. "Trust me, when I watched this scene, I was shocked. I was shocked by my tongue."

Though this was a reaction to getting sent home, it's still Mykenna's favorite. "I was disappointed because I had just gone on a two-on-one and he had trusted my word, and I felt confident. I was so sad to say goodbye to the girls and say goodbye to Peter," she says. "It's quite the legendary frown. I must have like, the strongest muscles in my mouth to be able to do all [of these faces]."

Mykenna was clearly feeling herself at the Women Tell All. "I think it was my time to finally say something," she says. "I know a lot of people have been saying that I rehearse things, but I was not rehearsing anything. That little shoulder action [and] little dance, this is my personality just warming up and getting excited to say something."

More like this
10 Photos Of The Wildest Limo Arrivals From 'The Bachelor' Premiere
By Brad Witter
This 'Bachelor' Contestant Had The Best Reaction To Wearing The Same Dress As Another Woman
By Grace Wehniainen
A Guide To All Of Zach Shallcross' 'Bachelor' Filming Locations
By Brad Witter
The Bachelor’s Greer Blitzer Apologized For “Uneducated, Ignorant” Past Tweets
By Brad Witter
Get Even More From Bustle — Sign Up For The Newsletter
From hair trends to relationship advice, our daily newsletter has everything you need to sound like a person who’s on TikTok, even if you aren’t.