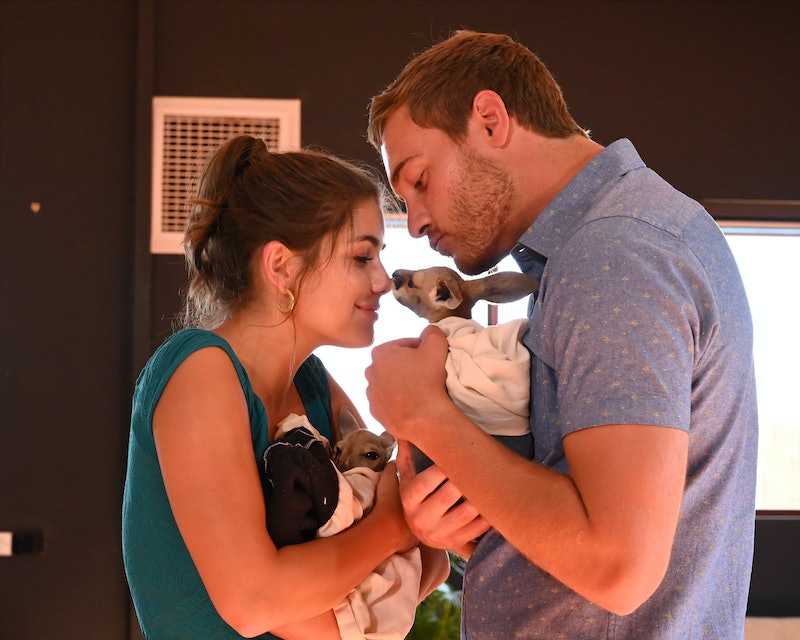 It's still not clear whether Madison or Hannah Ann will ultimately end up with Peter's final rose, but the Bachelor wants to make it clear before the finale that he has a lot of love for both women. On Monday, March 9, Peter thanked Madison and Hannah Ann for sharing his Bachelor journey in a post on Instagram.

Just 24 hours before part 2 of his Bachelor finale airs, the pilot shared several photos from his final two dates in the Australian outback with both women — as well as a shot of him cuddling a baby kangaroo — while thanking them for the "love" they shared with him on the show. "Being the Bachelor has been the most incredible experience of my life," Peter wrote, adding that over the course of his time on The Bachelor, "I have grown in ways that I didn’t even know possible."

He then thanked both Hannah Ann and Madison for "coming into my life and showing me love like I will never forget," revealing that meeting the two of them was "the most beautiful thing" that ever happened to him. Peter ended his post, writing, "No matter how this thing ends, I will be forever grateful for you both and this once in a lifetime journey," along with a heart emoji.

Peter's post comes in the middle of his shocking, two-part Bachelor finale, although it doesn't offer up any hints about which of the two women will receive his final rose — and possibly a proposal. While his post shared a great deal of affection for both women, Peter's family clearly preferred Hannah Ann during their meeting during the first part of the finale, which aired on March 9, with Barbara Weber even describing the model as an "angel on earth." However, when they met with Madison, both of Peter's parents and his brother, Jack, were focused on the pair's differing lifestyles and her conflicting feelings regarding the Fantasy Suites.

Ultimately, that seemed to take a toll on Madison, who decided to break up with Peter and head home before the final Rose Ceremony. "I don't want us to feel like we have to work into overtime to love each other," she told the pilot, adding, "We have to think about compatibility and I don't think we're the best for each other." Despite only having one woman left, Peter still wasn't sure what he wanted to do, even confessing to Hannah Ann the night before the final Rose Ceremony that his heart was "torn" between her and Madison.

For weeks now, Bachelor host Chris Harrison has teased that "even Peter doesn't know how [his season] is going to end," a claim that he reiterated during the promo for Part 2 of the finale. In the video, Harrison asked Madison if she regrets leaving the show and whether or not she still has feelings for Peter, which makes it seem like the decision between her and Hannah Ann isn't quite as easy as it seems.

Regardless of what happens on Peter's final episode of The Bachelor, it's clear that both Hannah Ann and Madison made a big impact on the pilot. Whether he ends up with one of them or just decides to stay single, Peter's Instagram post shows that "the process" really did allow him to find love with two gorgeous women over the course of the show. Whether his journey ends in an engagement, however, is a whole other story.