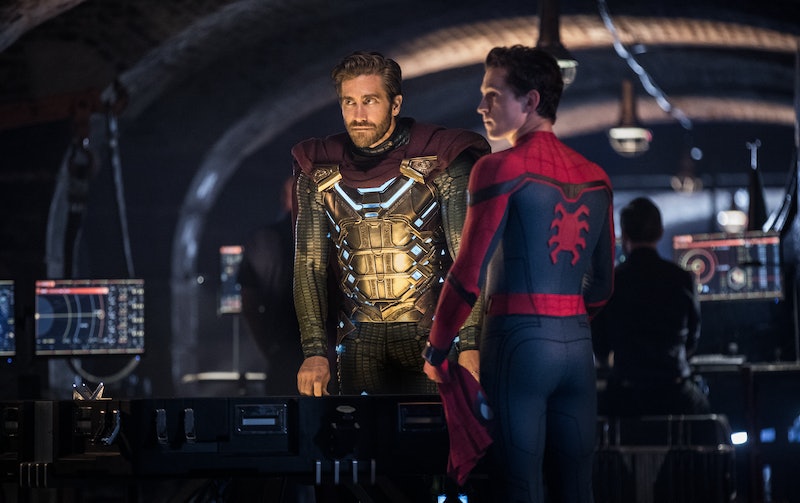 Without going through the entirety of the movie's plot, throughout Far From Home Mysterio/Quentin Beck basically uses CGI to create illusions that cannot be distinguished from reality. He's not a great fighter and he doesn't have any super powers, but he is really good at using technology to make it look like he does and to confuse the hell out of Peter Parker. At the end of the movie, Spider-Man has a final confrontation with Mysterio, who is trying to kill him. Peter defeats him the villain instead, saving all his classmates in the process.

Long story, short-ish, by the end of the movie, it looks like Mysterio is dead.

But then, the mid-credits scene comes. It shows a news report in which a video is played of Mysterio — on his death bed (or death... that hallway they fought in) — framing Spider-Man as a heartless murderer and revealing Peter Parker's identity to the entire world. Mysterio makes it sound like Spider-Man came after him for no reason at all and plays a clip of Peter saying "execute them all," which he really did say, just not in reference to a bunch of random humans like Mysterio makes it look. It was just really a bad choice of words on Peter's part.

While this is a very stressful way to set up a third movie, if we're just looking at Mysterio's fate, the video draws that into question. If the video is released to the news, does that mean Mysterio was the one who sent it in? Why would he still be after Spider-Man after his death? Was the Mysterio who "died" just another illusion?

Well, there is a key shot that clarifies this. Before the end of the movie, William (Peter Billingsley), Mysterio's right hand man, is shown downloading something from a computer onto a flash drive. (Or whatever fancy version of a flash drive these people have.) It can be assumed that this is a copy of the video that is released. Remember, William was watching everything that was going on with Spider-Man and Mysterio and has the technology to make it appear as though Mysterio is saying or doing pretty much anything. Either Mysterio and William worked together on getting the video together last minute, or they planned in advance to do this if things didn't go according to plan.

William is one of the many disgruntled former employees of Stark Industries who teamed up with Quentin to dishonor Tony's memory and take over his work. If he was still willing to work with Quentin once things had gone so far (like, attempting to murder multiple 16-year-olds far), then maybe William will appear again and try to help another villain.

Or, Mysterio could be back. It definitely seems like he's dead and was just messing with Spider-Man from beyond the grave, but given that his entire deal was making things appear real when they weren't, maybe he's not really gone. Games Radar points out that "all signs were pointing towards a Sinister Six making Spidey’s life a living hell. Vulture and Scorpion are in cahoots in jail, while Mysterio would have got us halfway there." (Remember, Vulture and Scorpion meet in a Homecoming post-credits scene.) If Mysterio comes back something like that team-up from the comics could still happen. (Hell, maybe he could come back in a holographic form that William controls. They seemed to be recording a lot of motion capture footage of him.)

The point is, we don't know, because we don't know what Marvel has planned for Phase 4. If any information had been confirmed, maybe we would know, say, if Gyllenhaal had been contracted for another movie. For now, it's probably best to assume Mysterio and Gyllenhaal were one-and-done, and maybe you'll end up being surprised to see otherwise.