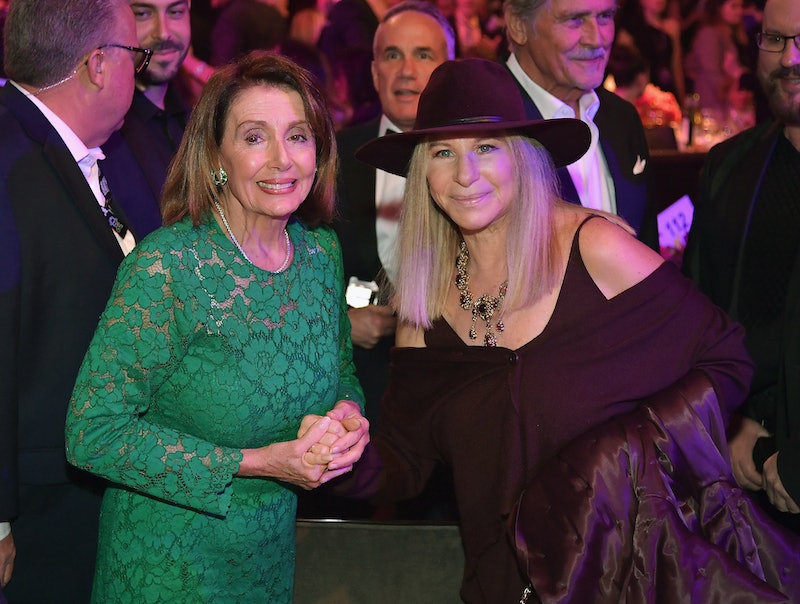 "The first introduction tonight is someone who's joined us many times before, but somehow, I know and all of you out there know, this year is different. She's front and center, making history as never before. She is now the highest ranking female politician ever. Ever. Ever in the U.S. Need I say more?" Davis said, according to video of his introduction. "Ladies and gentlemen, join me in giving the warmest welcome to the Speaker of the House, Nancy Pelosi."

In videos of Pelosi's introduction, you can see most of the room stand to clap for the Democratic politician, who wore a green dress to the event. Some people captured on the video even imitated Pelosi's sarcastic clapping response to President Donald Trump's State of the Union address. (The clap was dubbed "iconic" by commentators almost as soon as it happened.)

Apparently Pelosi was asked for more selfies than most celebrities in attendance, according to the Associated Press. To give you an idea of how impressive that is, the party was also attended b A$AP Rocky, Diane Warren, Rae Sremmurd, Courtney B. Vance, Russell Wilson, Kathy Griffin, Angela Bassett, Beck, Alice Cooper, and Travis Scott, among others, the Associated Press reported.

Pelosi didn't offer any remarks after Davis' speech introducing her; instead, she stood and waved, according to HuffPost. The House Speaker sat a table with Tim Cook (CEO of Apple), Barbra Streisand, and Calvin Klein, HuffPost reported. (Streisand also got a standing ovation, according to The Hollywood Reporter.)

Despite the lack of public remarks, the highest ranking Democrat still made a splash. Los Angeles Times reporter Gerrick D. Kennedy confirmed on Saturday that Pelosi's line was longest. Even singer Katy Perry seemed to be charmed by Pelosi as evidenced by the photo (see below) from Saturday by photographer Rich Fury.

While Pelosi's State of the Union clap may have become a meme, the California Democratic politician has said the clapping at Tuesday's speech wasn't supposed to be interpreted sarcastically. "It wasn't sarcastic," Pelosi told reporters on Wednesday, according to People.

Pelosi told reporters that she was trying to encourage Trump's words about compromise in governing. "Look at what I was applauding. I wanted him to know that it was very welcomed," she told reporters, according to The Washington Post.

Earlier in the week, Davis told Variety, an entertainment trade magazine, that Pelosi's appearance was very welcome. "She called me to say 'I'm coming back, this is one night of the year I would never miss,'" Davis told Variety.

Pelosi — and Democrats — will return to Washington, D.C. to the next round of funding negotiations, including border security. The government is funded through Feb. 15, according to The New York Times.