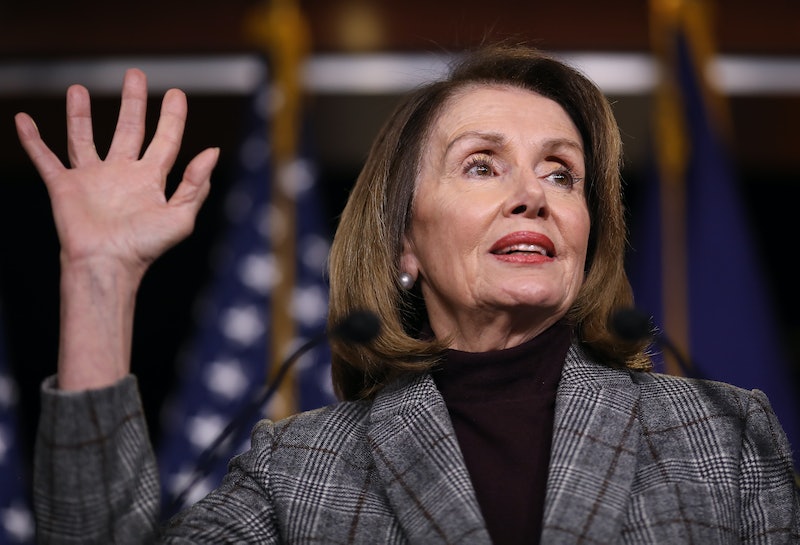 The vice president's stomping grounds in D.C. just got a little bit smaller. According to NPR, House Speaker Nancy Pelosi took Mike Pence's extra office space in the House and is giving it away to the White House legislative affairs team. And for anyone who's wondering: yes, she is totally within her rights to strip Pence of this access.

Per NPR, former House Speaker Paul Ryan gave Pence this space after Trump was inaugurated, as a gesture of apparent goodwill in 2017. Though Pence has rarely used the space, the publication reports, it has still been held for him throughout the years, despite the fact that he has an official office on the Senate side of the Capitol. At the time, Pence was the first vice president since Dick Cheney to have offices in the House and in the Senate, according to The Houston Chronicle.

Not anymore. Via NPR, Pelosi's staffers removed the placard with Pence's name above the office door in recent weeks without any fanfare. To the publication, an aide did confirm that Pelosi had taken the space away from Pence, clarifying, "Room assignments are reviewed and changed at the beginning of every Congress."

Bustle has reached out to Pelosi's office for comment.

Pelosi and Pence couldn't be more different in their political affiliations and beliefs. Perhaps the most relevant and recent example of these differences can be found within their differing opinions of the recent national emergency declared by the president.

I know the Republicans have some unease about it no matter what they say, because if the president can declare an emergency on something that he has created as an emergency, an illusion that he wants to convey, just think of what a president with different values can present to the American people... [A] Democratic president can declare emergencies as well. So, the precedent that the president is setting here is something that should be met with great unease and dismay by the Republicans.

As for Pence, he has been supportive of the president's aims regarding a border wall and a national emergency, and he has lashed out at Democratic opposition, including Pelosi, when they've tried to get in the way of this goal. When Pelosi rejected a border wall compromise by Trump earlier in the year, Pence appeared on Fox News Sunday in January, saying,

It was disappointing to see Speaker Pelosi reject the offer before the president gave his speech on Saturday. The president is offering a solution. And what we have from Democrats' leadership is just soundbites.

Still, in spite of their many differences, the two politicians have remained largely cordial to one another in person throughout Trump's presidency. They were seen at the State of the Union this winter chatting amicably before Trump's address, and also gave each other a quick handshake when they both first arrived at the event.