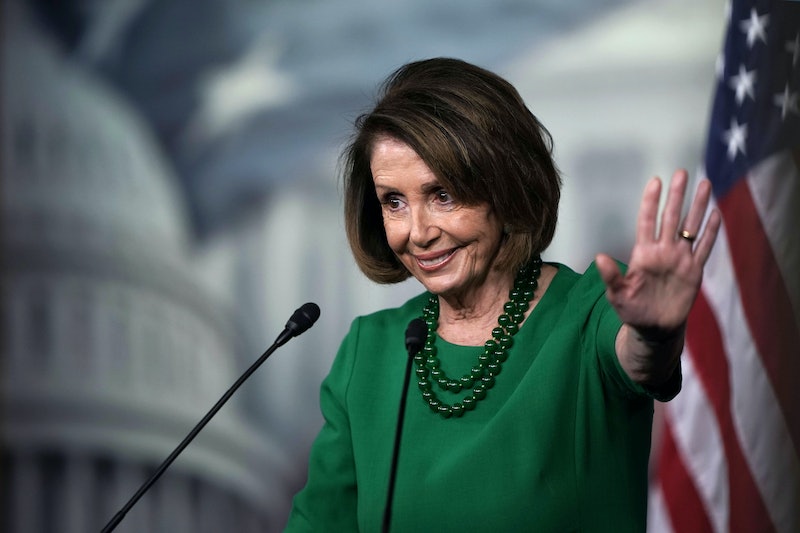 It's possible Nancy Pelosi has had more vitriol directed at her than almost any other female politician in the United States, but she doesn't care one bit. The woman likely to become the next speaker of the House sat down with Elle magazine to talk about her job and her critics: "I don't necessarily feel hated," Nancy Pelosi told the magazine. She added that she barely even thinks about her so-called haters.

"They wouldn't come after me if I were not effective," Pelosi told Elle. "I consider myself a master legislator. Republicans fear me for that, but also because I am a successful fundraiser, enabling our candidates to have the resources they need to win. So from a political standpoint they have to take me down, and from an official standpoint they have to take me down." She went on to say she was "spending more time talking about it right now than I ever have thinking about it."

Pelosi has led the Democratic caucus in the House of Representatives since 2003 and been a bitter target of Republican criticism. She's unpopular overall in the country; between 46 and 53 percent of Americans viewed her unfavorably for most of the period between 2013 and 2017, according to HuffPost's analysis.

Some pundits argue that sexism is to blame for that disfavor, while others point to the fact that House speakers typically lose popularity over time (as The Washington Post points out, she maintained a positive net approval rating for longer than her predecessors, Paul Ryan and John Boehner).

Many harsh words about Pelosi come from the right, but there's significant criticism of her on the left, too. Those critics broadly fall into two camps — Democrats who oppose her in an attempt to win support from more conservative constituents, and those who oppose her because they don't believe she's progressive enough.

Sixteen Democrats from the former group wrote a letter in November declaring they would not support her return to speakership this year. She now seems to have secured enough votes to win, though, in part by promising that she will not seek reelection to leadership after four more years pass.

Some progressives have publicly opposed Pelosi by claiming she doesn't adequately represent the leftward shift of the party. After Hillary Clinton's stunning loss in the 2016 election, Pelosi made comments indicating that she thought Democrats were still on the right path to win voters. "I don't think people want a new direction," she told CBS' Face the Nation.

Many progressive member-elects such as Alexandria Ocasio-Cortez have decided to support Pelosi's speakership bid anyway because they don't believe she has a viable challenger from the left. But Ocasio-Cortez and others have already rejected some of Pelosi's earliest goals, indicating that they won't shy away from a battle when they don't think she's acting in the country's best interests.

Although political analysts are obsessed with dissecting the country's passionate opinions about Pelosi, the veteran congresswoman seems to care little about that herself.