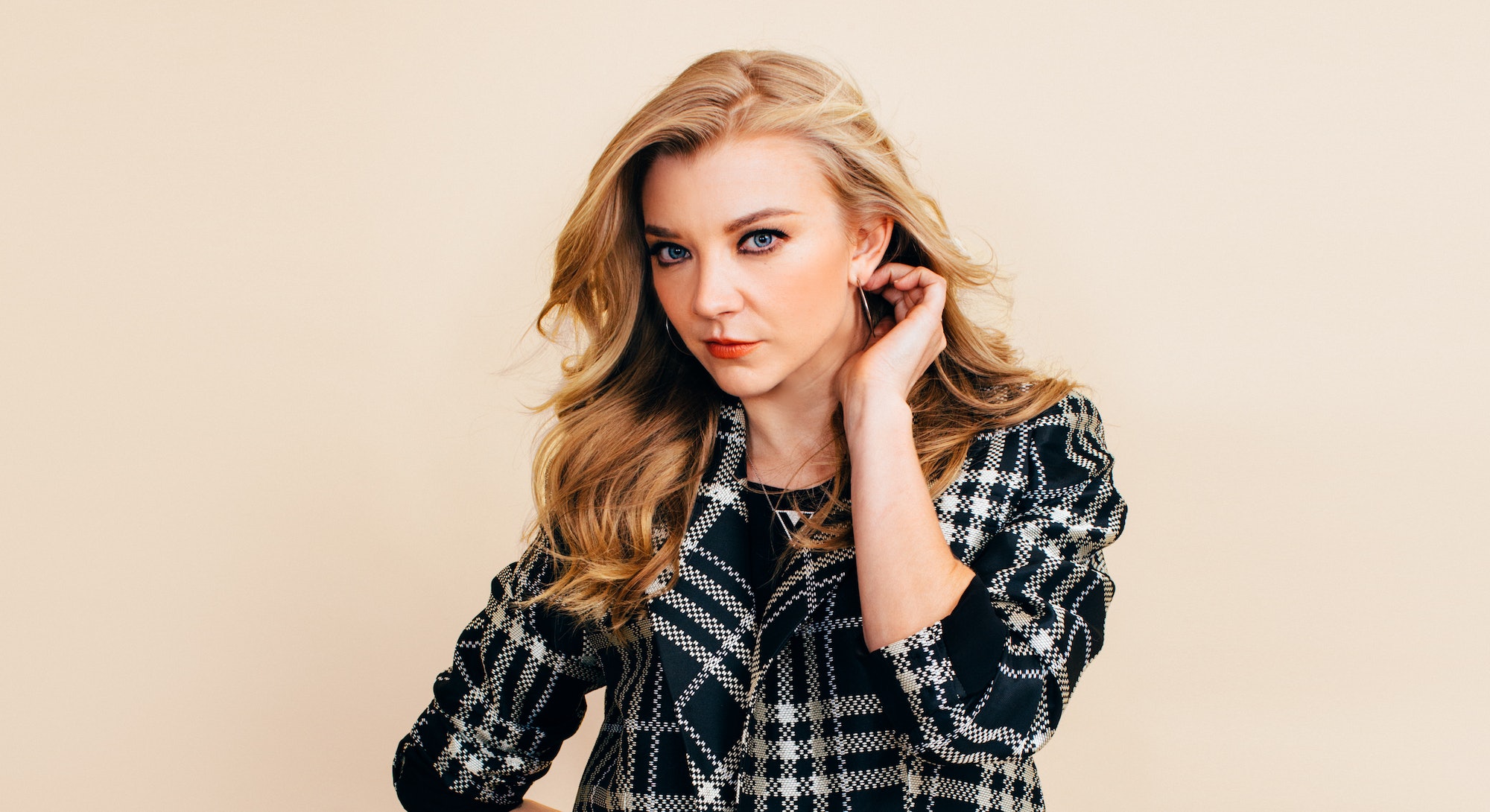 Natalie Dormer knows you want to ask her about Game Of Thrones. Sure, she’s working on other projects, and she’s played a part in many a franchise (The Tudors and The Hunger Games among them), but the Game Of Thrones obsessives always want more (and rightfully so). She can feel the vibration of my question forming, and, even though her character, Margaery Tyrell, has already been killed off the much-loved drama, Dormer is always ready to offer her own opinions as to where the princes, queens, and dragon-slayers on the show will end up.

When we sit down together at Bustle HQ, Dormer admits she’s worried about Sansa (“I love her journey as a character”), she wants Cersei to have a “massive revelation of self,” and she tacks on the exceptionally juicy tidbit that she knows how it all ends. “They’ve been shooting a lot of battle sequences… it’s the fight to the finish,” she says, letting the statement lie, with an unmistakeable emphasis on the word "finish." Though Dormer loved her time on Game Of Thrones and is happy to have been a part of the series, she’s beyond ready to move on.

No longer satisfied with the stories men have projected onto women in the industry, Dormer is among those actresses and storytellers who is taking matters into her own hands. In one of her post-Game Of Thrones projects, In Darkness (in theaters now), Dormer plays Sofia, a blind musician who, after she hears the murder of a neighbor, is thrown into the gritty underbelly of London, complete with war criminals, fight sequences, and plenty of intrigue. While playing a character like Sofia would be a boon for many actresses, Dormer took it a step further — she wrote In Darkness, too, along with director Anthony Byrne.

“I started writing In Darkness out of frustration out of the quality of three-dimensional female protagonist roles that were about. It was originally Anthony Byrne’s idea, and… he was trying to find a writing partner,” Dormer says. On a vacation to Malta, Dormer explains, she was helping Byrne work out plot points and fully shape up the script. “He was like, ‘Well, why don’t you write it with me?’ And I was like, ‘Well, I know what you’re trying to do, because you’re trying to write the kind of role that I feel is lacking, [a role] that I want to play,’” Dormer says. And suddenly, Byrne had found his writing partner.

This all started in 2009, long before intricate, thoughtful female stories became box office blockbusters (like, for example, the top three films of 2017). And although other, bigger-name opportunities came along in the meantime, Dormer didn’t forget In Darkness, pushing forward on her passion project until its release; luckily, it happened to come out at just the right time. “I’ve had the successes that I’ve had with Game Of Thrones and The Hunger Games and all these other great projects, but in the meantime, the conversation has changed about female protagonists, so beautifully now, it’s a part of the wave of readdressing the issue of fleshed out, flawed female characters leading a narrative.”

Although Dormer explains that her tendency to gravitate towards playing tough, strong women is not a conscious code of conduct — “it must say something about me,” she says, laughing — her focus on not operating along the Hollywood status quo is a noble one. Things can’t get better in the industry until female artists like Dormer insist on not being pushed to the sidelines and work to create characters who resemble real women — not cardboard cutouts designed to stand beside complex men.

And for her next act of defiance, the actor and writer has thrown herself into one of the most-loved examples of magical realism in film history: Picnic At Hanging Rock. The all-new, six-part Amazon series is based on Joan Lindsay’s 1967 classic novel of the same name and Peter Weir’s seminal 1975 film version in which a group of Australian schoolgirls in 1900 disappear atop a mountain, never to be seen again. And though it’s just as dreamy as its predecessors, with Dormer as its star, the new Picnic goes deeper into the questions of identity, oppression, and autonomy posed in the original works. In the original, Hester Appleyard, the founder of a women’s finishing school in the Australian countryside, is older, more of a microcosm for the old Victorian ways the students. But in the Amazon version, Dormer's Hester is younger, and much closer in age to her charges, so her affinity for the old ways that her students rail against is fairly perplexing. How does a woman that should have a modern sensibility get so wrapped up in pushing her students into the chains of the past?

Hester’s quest for control and the status quo doesn’t help her students, as she hopes — it crushes them. “Her ethos in creating the school was to take in the waifs and the strays, the mavericks, the ones that don’t quite fit,” says Dormer. “That is a redeeming feature. But she’s just so freaking terrified and in fear of being discovered that that tight grip gets [tighter]… and the neurosis just gets more and more out of control.”

Hester is no doubt complex, and her bad qualities certainly outweigh her redeeming ones. According to Dormer, though, this is all just fine. We’re more used to men being downright scoundrels, she says, and although Hitchcock created flawed, real women in films like Marnie or Vertigo, those women were given “unfortunate ends” in order to vilify them for being “unorthodox,” as Dormer puts it.

“And that’s the change now… I think slowly… a character can be compelling and we can identify with them, male or female, even if they’re not, you know… even if they have some issues they need to work on! They need some therapy, bloody hell. Hester is traumatized,” Dormer exclaims.

It’s very easy to watch all six hours of the new Picnic At Hanging Rock and be aligned with the girls and against Hester — Hester is operating in the old, the students want to operate in the new, and contemporary women may not understand the very, very limited terms under which women in 1900s Australia (or the world, frankly) were forced to work under. “Let’s not forget that [women] didn’t have the right to vote. They had no political voice. The vote isn’t in yet… They have no economical independence. They have no political voice or independence. They are second-class citizens at this period,” Dormer says, leaning forward as to truly make her point.

Hester is playing in a system that she knows very well, and even though it’s unfair, she knows how to work it. That’s something that modern women should think about, Dormer says, before diving into Picnic At Hanging Rock. “It’s easy for us 21st century women, walking around with the vote that we take for granted, and our own bank accounts, and ability if we choose to not be defined by any man, be it father, brother or husband, to not quite look at the profound limitations that women in this era were dealing with,” she says.

That said, Dormer insists that what people take from her project is not her business — she is there to create and “cathartically vent” her frustrations in the world through the stories she tells, and she can’t control the relationship that her audience has with her texts. There are themes of oppression, identity, and self-awakening in both In Darkness and Picnic At Hanging Rock, and when it comes down to it, good content, as it were, is all about creating conflict in people’s minds. “I don’t mean it to sound like a trite phrase, but it’s cliché because it’s true. Good drama is about conflict, and there is no greater conflict than the conflict inside a single human’s psyche,” Dormer says.

It’s that push and pull of human drama that keeps Dormer going, and it’s also what keeps her sane. Acting, she says, is like a “release valve” for her to process the chaotic events of her life and also the world at large. “If I don’t act for a while, I go a little bit crazy… I just, you know, I’m a worrier,” she says. It's that tension that keeps Dormer going, pushing forward with roles that both mean something to her and hopefully, to the women on the other side of the screen, too.