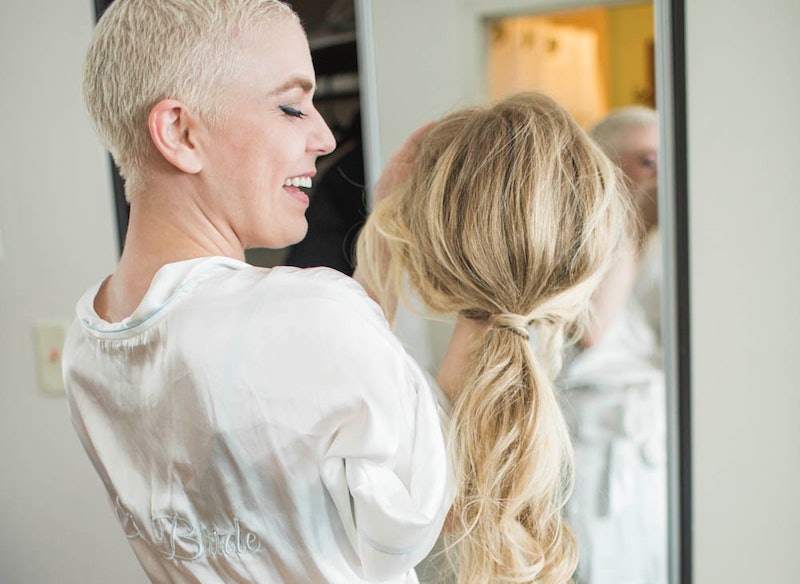 Natalie Hodges always had the longest, thickest, most gorgeous head of hair I'd ever seen. We grew up in the same small Indiana town populated by Amish folks, and we even went to high school at the same time in the early '00s. Though we have never been close friends, we’ve remained acquaintances and connect intermittently through social media. Facebook is how I learned that she'd become a hairdresser as an adult — and a kickass one, at that. That's also how I learned that, less than a year before her December 2017 wedding, she was diagnosed with stage II Hodgkin's Lymphoma, a form of cancer that originates in the lymphatic system that can start — and spread — almost anywhere.

It's the kind of news that would turn anyone's world upside, the kind of helpless shock that comes along when you feel like your body has betrayed you. It can also make everything else in your life that's not your illness feel like it's been put on hold. Many cancer patients are forced to become hyperaware of their own mortality, all while living in an uncomfortable, uncertain holding pattern. That, in addition to the physical side effects of both the illness and the treatment, is overwhelming to imagine. When it came time for Natalie to treat cancer, the subject of her hair inevitably came up, the fate of which was surrounded with more uncertainty.

“At the beginning, I couldn’t image what it would be like to be bald since my hair was down to my waist and my life is consumed in hair all the time,” she tells me.

Instead of waiting for her hair to fall out from chemotherapy, Natalie decided to take control of the situation and came up with a plan: She would cut her hair and have it made into a wig that she could wear on her wedding day.

Before her first chemo treatment, she invited her family and friends to help her with this process. Her fiancé, Jordan, a filmmaker, documented the moment and Natalie used the video to tell friends and family that she had cancer, and that she was determined to be a beacon of positivity throughout her battle. Afterward, she sent her wavy blond hair — along with some of her sister's curly, brown hair — to Compassionate Creations Wig Design in California.

The wig took some time to make, and in the meantime, she documented each step of her cancer treatment via YouTube. The videos discussed everything from saving her fertility to loopy, foggy "chemo brain" to gradually losing more and more hair (and how surprisingly painful it can be physically). The day that her wig came, she posted another video, saying, "Today was like Christmas morning for me ... They made a wig that is so beautiful and I'm so excited about it."

“The cool thing about [the wig], like I said, is that it’s my hair and my sister’s hair and I’m so glad that I got it, and they did such an awesome job," Natalie said in one of her videos. "But, I think, I mean, since I still have hair now, I don’t know how much I’m going to wear it on a day-to-day."

However, there was one day on the horizon for Natalie that wasn't like the rest: Her wedding day. Even before the wedding, though, she wavered a little, not sure if wearing the wig was the right call after all.

"Through six months of chemo I almost lost all my hair, and I got use to my sparse pixie; it had become the new me on so many more levels than just vanity," Natalie told me. "I didn’t want it to come across that I didn’t feel comfortable, confident, or pretty enough without it, because at that point — after kicking cancer's ass — I felt quite the opposite."

She even recalls her fiance saying to "just come down the aisle bald." But still, something stopped her: she wanted her wedding to be about him and her. She wanted people to look at them as a whole, and not see her lack of hair and only think of her cancer. So, when the day arrived, she wore the wig down the aisle.

"Walking down the aisle wearing my wig was exactly how I imagined it to be — a full circle moment," she said. "Of course, every single person there was thinking about the journey I had just conquered, but the wig helped everyone remember the person I was before that, too."

The wedding day wasn't the only reason she felt that way, either: Two months earlier, Natalie learned that she was cancer free.

"I did feel beautiful at my wedding — probably more beautiful than I would have not having had cancer. It also helped to be walking down the aisle to the most supportive and encouraging partner who, through all my low points, made me feel beautiful everyday. Our wedding day was a celebration on steroids," said told me. "A lot of people feel different in their relationship after they get married — they feel richer, stronger, more as one. Jordon and I had gained that with each other going through my journey with cancer, and much more. So when the day came, it truly was a celebration of love, partnership and life itself."