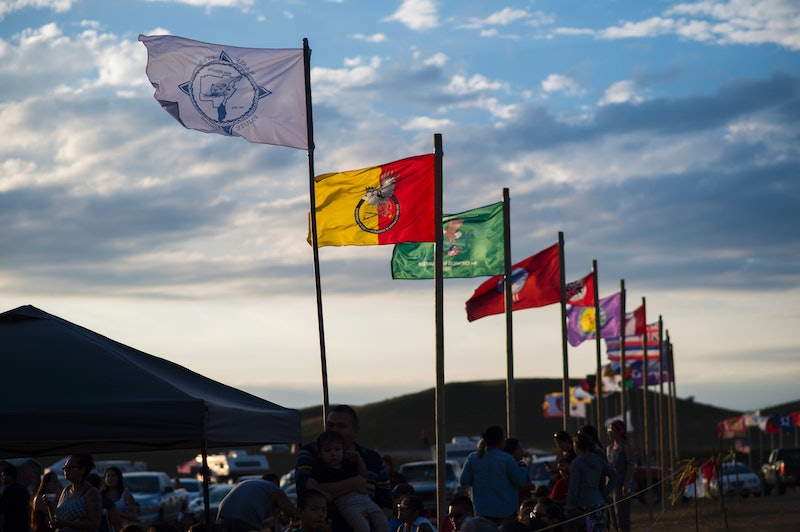 Voting rights organizations are making a final push to get out the vote with just a week to go until the midterm elections. In North Dakota, those efforts have taken on greater urgency because a new voter ID law will be in effect come Nov. 6. Tribes and advocacy groups are on a mission to overcome longstanding obstacles that have hindered Native Americans' right to vote and ensure their communities have access to the ballot box.

Earlier this month, the Supreme Court decided that it would allow North Dakota's voter ID law to stand. That means voters will be required to present identification showing their street addresses when they vote at their polling place. There's one glaring problem with that requirement: Native Americans who live on reservations in North Dakota don't necessarily have street addresses. They typically use P.O. boxes instead, which are listed on their IDs.

Phyllis Young, a longtime activist and member of the Standing Rock Sioux Tribe, tells Bustle that she is "not devastated by this court decision." Young, who fought on the front lines for her tribe on other issues like the Dakota Access Pipeline, says the voter ID law is just further evidence of U.S. institutions systematically stripping away the rights of Native Americans.

"I believe that our people are the best in crisis," Young says, pointing to the effect that the voter ID law will have on her community. "[This ID law] — they’re bringing out the best in our people."

Getting Out The Native Vote

The Supreme Court decision came less than a month before the midterms, so tribes in North Dakota are on a mad dash to expand outreach and ensure that their members have the necessary identification to vote. That effort has ranged from getting new IDs in the hands of their members to addressing access issues on a much broader level.

The Standing Rock Sioux Tribe, the Turtle Mountain Band of Chippewa Indians, and the Three Affiliated Tribes of Fort Berthold are all providing new ID cards with street addresses for their respective members for free until Nov. 6. The Standing Rock Sioux Tribe, which spans both North and South Dakota, will also have drivers at hand on Election Day to help its members get to the polls.

Tribes have had help from Native American voting rights groups, too. Jacqueline De León, a staff attorney at the Native American Rights Fund (NARF) — an organization that has challenged the North Dakota voter ID law since 2016 — says that it is working with every tribe in the state to help get new IDs to people who need them. NARF is relying on funding from donors online to help tribes cover the cost of that effort.

The Standing Rock Sioux Tribe has partnered with the Lakota People's Law Project and another group working for Native American voter access, Four Directions, on outreach. Young says the effort will focus on the youth vote.

"We’re really mobilizing and trying to get the information out to our young people," she says. "We have our families, [including] 5-year-olds, who are going door to door with us."

The Lakota People's Law Project helped organize a Stand-N-Vote Concert at Standing Rock, which featured artists and celebrities including the Dave Matthews Band and Mark Ruffalo, in an effort to whip up enthusiasm among young people for the midterms. According to program director Daniel Paul Nelson and Young, an initiative also was planned to have young people paint buses that will help bring voters to the polls.

"Bringing creativity to bear on this work and involving the community in doing that is something that we all can do as well," Nelson says.

De León says NARF is working to address the structural barriers to Native Americans voting across the country, including helping craft federal legislation to strengthen and secure access to voting for Native peoples.

"We also have ongoing litigation at a local level to try and combat some of the more egregious instances of voter suppression and unfair tactics," she adds. "But it’s really just a question of resources and funding. We can’t get to every instance that is radically unfair today."

But Native Americans across the country have long faced obstacles at the polls. Native peoples see higher poverty rates than any other group in the country, and many live in rural areas that are far from polling places.

In North Dakota — the only state that doesn't require voter registration — the voter ID law presents yet another physical barrier. For voters who live at Standing Rock, for example, the mean travel distance to a location where they can obtain a state-issued driver's license or non-driver state ID is 61 miles.

Native Americans in other parts of the country have to travel even greater distances to vote, according to the National Congress of American Indians. Some trek as far as 163 miles.

De León says polling locations tend to be located far from Native American reservations. "We have unreasonable distances on dirt roads that cost gas and money," she says, adding that these roads "may not be fit for driving."

Native Americans without adequate internet access can't avoid such a commute, even as more states offer online voter registration and even online voting. A 2015 report by the Federal Communications Commission (FCC) found that 63 percent of residents on tribal lands did not have access to fixed broadband. Lack of fixed broadband increased to 85 percent in rural tribal areas, the report found.

There are subtler social barriers to voting for Native Americans as well. Having a polling location inside a sheriff's office, for example, can have the effect of intimidating some Native voters.

"Often, elections are run by local county officials, and there are longstanding disagreements," De León explains. "The truth is, these are settlers and [descendants] of settlers, and there’s Native American communities, so there’s tensions on a very local level."

She adds that NARF has gotten reports that when Native Americans enter a polling place, "everybody that’s working the polls falls completely silent while they cast their vote, and stared at them."

According to FiveThirtyEight, a single voter in North Dakota holds more power to decide the outcome of an election than voters in any other state. The Native American vote is widely believed to have lifted Democratic Sen. Heidi Heitkamp to victory in 2012, when she won her race by less than 3,000 votes. Her chances of re-election this year, already slim because of her vote against Supreme Court Justice Brett Kavanaugh, grew even slimmer after the Supreme Court's decision on the voter ID law.

But in a year of many historic firsts for women and minorities running for office, Nelson says he believes engagement among Native American voters has increased — as has the political polarization between Native communities and the areas that surround them.

"There’s a real sense of alienation here and being stranded amidst hostile attitudes," he says. "I think there’s a lot of anger. And a lot of passion to get things shifted to a different track."

De León notes that non-indigenous people are often shocked to hear about the conditions on reservations and in other Native American communities, including poverty, poor housing quality, and a lack of internet access. While there are no Native American candidates running for federal office in North Dakota this year, campaigns like Deb Haaland's in New Mexico and Sharice Davids' in Kansas offer Native communities hope for representation on the federal level.

"All of these things that we have to reeducate people on so that they can first listen to what the issues are — we don't have to do that with Native American candidates," De León says. "They already know what the hurdles are [that are] facing Native American communities, and they’re already ready to get to work."

Correction: A previous version of this story included inaccurate information from NARF about the logistics of issuing new voter IDs. It has been updated to accurately reflect the group's efforts.