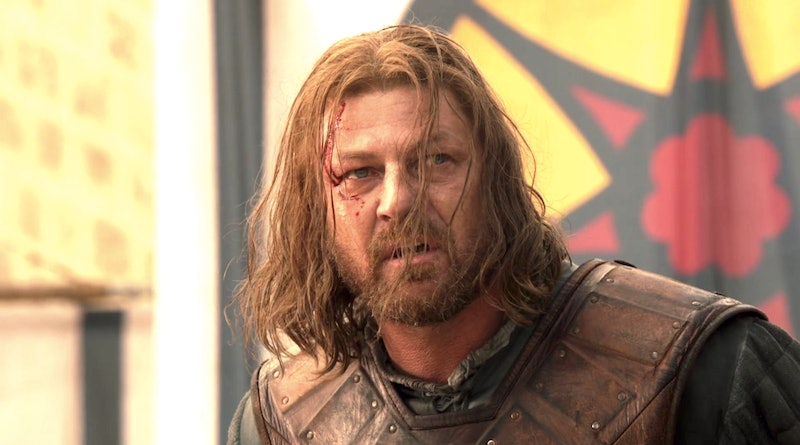 There are just so many Game Of Thrones questions that fans want answers to, especially as the HBO series gears up for its final season. But one of the show's first mysteries was just solved. Actor Sean Bean finally revealed Ned Stark's last words before he died, and it might disappoint some theorists who thought it was a clue that the character could return in Season 8.

Many have rewatched and rewound the penultimate episode of the first season to see what Ned whispers before he's decapitated by order of King Joffrey. Did he say "I kept my promise," as a way of acknowledging he kept the secret of Jon Snow's birth parents? Did he murmur "Valar Morghulis," a commonly uttered Game of Thrones phrase which means "all men must die"? No, Bean told the Huffington Post, Ned is “just saying a prayer.”

"It’s quite subtle in that many people wouldn’t pick it up," he explained. Bean also said he couldn't be "too specific" in what prayer he was saying, "because I don’t know if religion [like that] was around in those days, whatever they were. I just thought, ‘What would you do if this were really gonna happen?’ You probably would pray." But, in a moment like that, the actor said, "you’d keep it to yourself” because "there’s not much you can do really, you’ve got your head on a block. That’s about the only thing you can do is murmur.”

Luckily, Bean decided not to keep this little fun fact to himself, but fans might feel like this reveal is a bit anti-climatic. After all, there were some interesting theories about what Ned said and how it correlates to the rest of the show.

There were some Redditors who thought in his final moments Ned was speaking to Bran, the future Three-Eyed Raven who can travel through time. Perhaps he was giving Bran a clue on how to stop the Night King or would reveal why he lied about Jon Snow's parentage. The Los Angeles Times wondered if Ned might have warged into the flock of birds that fly overhead once he is beheaded, saving himself from death.

There was even one 2017 theory that said Ned never even said those words because he had actually already traded places with Jaqen H'ghar, one of the Faceless Men of Bravos who taught Arya. See, this theory claims, the man who was beheaded that day was actually Jaqen with Ned's face.

These theories, of course, have helped fans keep hope alive that Ned could return in some capacity before the show is over since there are so many questions he could help answer. Not to mention the fact that his fighting skills would definitely help the North's army take on these White Walkers.

But, according to Bean, he hasn't been contacted about returning to Game Of Thrones. "I’ve heard rumors, but not from very good sources that I might be back," he said. "But I think I’ve done my time there, and I created a good character. It’d be rather strange to see him resurrected.”

Strange? Maybe. But not completely farfetched, since they've already brought Jon Snow back from the dead — so really anything is possible. But, whether Ned Stark returns or not, Bean's reveal helps fans get some closure before the new season starts. And that's a good thing, since HBO's teased that most Game Of Thrones characters aren't going to survive the final season. That's why it might be time to give Ned Stark a rest, and start paying attention to some of your other favorite characters before they say their final words.