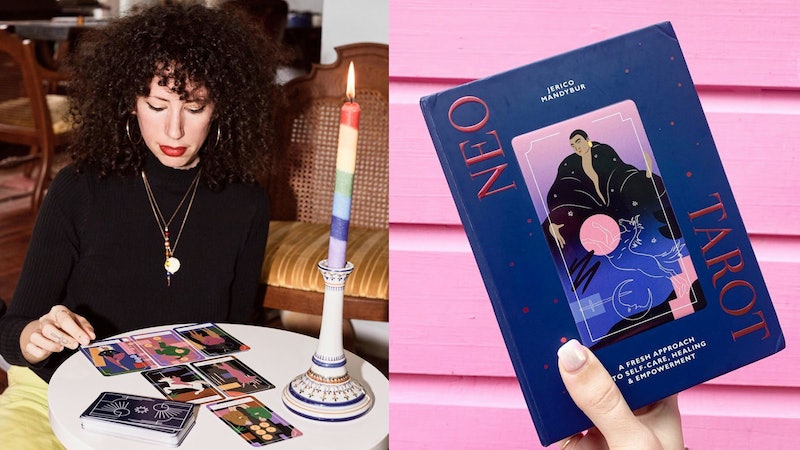 “Tarot and astrology are having a moment” is a phrase people repeat to me all the time, as a kind of half question, half statement. Especially now that I’ve just released a tarot book and a deck of my own, Neo Tarot. But despite the name, there’s nothing new about mysticism. Just ask the queers.

As a queer cis femme myself, I can attest to the timeless link between divination practices like tarot and the queer community. And it makes perfect sense. People drawn to these beliefs are people who see through the oppressive forces of domination and control in the world, because — along with people of other marginalised identities like BIPoC and people living with disabilities — the LGTBQI community has seen the pointy, punishing end of the institutionalised discrimination stick. As survivors of that oppression, they understand the importance and the sacredness of their uniqueness, their agency, and that of others. They may doubt the existence of God with a capital G but what they don’t doubt, is themselves.

They’re looking for empowerment. They want their power back. And mysticism helps them do just that. Witch communities, in my experience, are one of the most accepting and celebratory places for a queer person to find themselves in. Witches believe in autonomy, in sovereignty, in the sacredness of our bodies, and the okay-ness of our pleasure. It’s a place for outcasts, for marginalised voices — and I’m sure they won’t mind me saying — for freaks. Freaks like me who had no friends until I was a teenager because I was too busy reading up about unexplained mysteries and the supernatural. Freaks like me who were closeted for a long time before coming out as bisexual, then gay, then bisexual again. Then queer. Freaks like me who even today would rather take a bath than go to a gay nightclub. No shade to our nightclubs (please stop closing them down).

Talking to my fellow queers, witches, and queer witches — which they are more often than not, at least in my experience — about magic and the power of the mind is liberating. It feels like belonging, like possibilities, and like home. And yes, it’s always been this way. For example, you’d be hard pressed to find a lesbian who doesn’t have an above-average understanding of zodiac signs.

For me, queerness is mystical and mysticism is queer. It’s antithetical to religious dogma and pearl-clutching, dated moral codes. How could it be any other way? As to whether that means every person passionate about magic should be queer — of course not. But you would never find a true magician who positions themselves against queerness, only adjacent to it. Equal.

While for others, mysticism is a trend, for queer folk like me, it’s just the way it’s always been. But why the “trend” status? I believe it’s about visibility. Social media has brought witch communities and queer communities out of their respective closets and thrust them into mainstream conversations. Which is a good thing! But it means popular media thinks it’s just “discovered” some new trend, when it fact they’re just coming across something as old as time. That’s not to say tarot et al. hasn’t become more popular. It has.

Social media has also made “woo woo” tools and practices visible to demographics who may have never come across it before — your straight, cis, next door neighbour, for example. Suddenly, that feeling of belonging, of acceptance, of empowerment and healing is available for all to consume, regardless of their sexuality.

Does that mean mysticism is under threat of becoming nothing more than an Instagram aesthetic? Does that mean more and more cis, straight women are going to co-opt the word “femme”? They may be syndromes of the zeitgeist right now, but old knowledge and spirituality — like the queer community itself — has survived much, much worse. And it will keep on surviving.