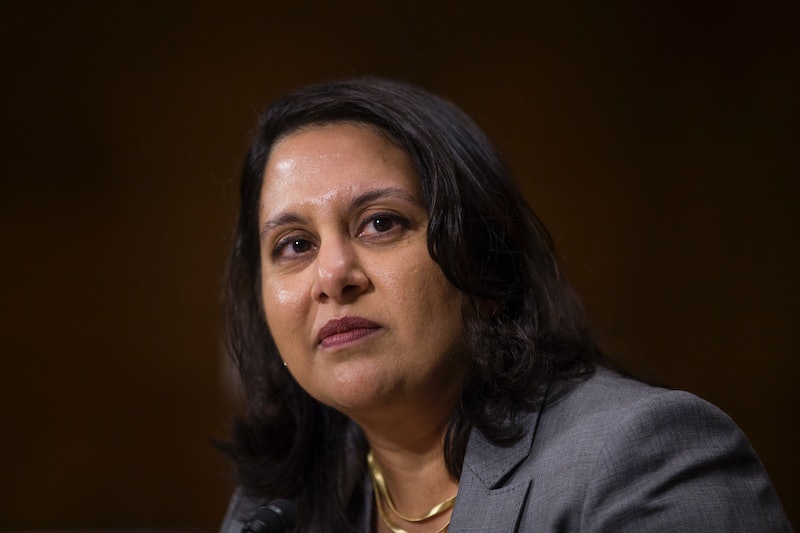 President Trump's pick to replace Brett Kavanaugh on the U.S. Court of Appeals for the D.C. Circuit has attempted to backpedal from her past writings on rape and sexual assault. After being grilled by the Senate Judiciary Committee about her controversial Yale op-eds on sexual assault, Neomi Rao sent the committee a letter on Monday explaining that she was a "sheltered" college student who had since changed her views on sexual violence.

"Many years later, I have experienced more of the ups and downs of life," Rao wrote in her letter to the committee. "Becoming a mother, my perspective has shifted to focus on the safety of my daughter (15) and son (11). With greater maturity, I have more awareness of the silent victims of assault and rape."

Rao wrote that watching her parents work with sexual assault survivors had opened her eyes to such abuse. In her letter, she also pointed out that the #MeToo movement had brought "previously untold stories" about sexual abuse and harassment in a variety of industries to the forefront. "I have not written or spoken about issues of rape or sexual assault since college," she added in her letter. "If I were to address these issues now, I would have more empathy and perspective."

"We firmly believe in the importance of a diverse federal judiciary, and it is not lost upon us that if confirmed, Neomi Rao would be the first South Asian American woman to sit on a federal appellate court," they wrote. "However, we are deeply alarmed by Neomi Rao’s record, particularly around gender rights, and we do not believe that she will bring independence and fairness to the federal bench."

The advocates referred to Rao's Yale op-eds on date rape, including a 1994 piece where she wrote, "It has always seemed self-evident to me that even if I drank a lot, I would still be responsible for my actions. A man who rapes a drunk girl should be prosecuted."

"At the same time," Rao added, "a good way to avoid a potential date rape is to stay reasonably sober."

It was such controversial rhetoric that came to haunt Rao during her confirmation hearing. "To be honest, looking back at some of those writings and reading them, I cringe at some of the language I used," she said before the Senate Judiciary Committee. "In the intervening two decades, I like to think that I have matured as a thinker and writer, and indeed as a person."

But Rao's claim that she has since changed her mind about sexual violence doesn't seem to have convinced her critics. Tweeting under the #RejectRao hashtag on Monday, the nonprofit Leadership Conference on Civil and Human Rights urged committee members to vote no on Rao's confirmation. "We'll be watching," the organization said.