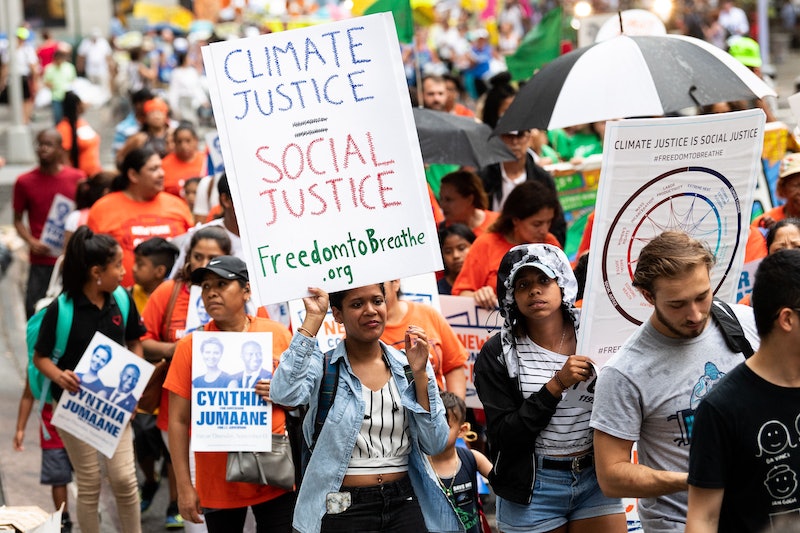 The Democratic presidential candidates want to stop the world from burning up. On Wednesday at 5 p.m. EST, CNN will host a seven-hour-long town hall where 10 candidates will get a chance to discuss their climate change plans. Those plans have a lot in common, including a goal to have net-zero emissions between 2040-2050, but they differ in their economic proposals, among other things. Comparing these plans isn't easy if you're not a climate scientist, though, so we've compiled a climate science glossary that'll help you understand what each candidate is bringing to the table.

All of the candidates aim to achieve net-zero carbon emissions, which is also known as a net zero carbon footprint, by 2040 to 2050. That's because a 2018 report from the Intergovernmental Panel on Climate Change (IPCC) found that, in order to keep global warming below 1.5 degrees Celsius, keeping in mind that the planet has already warmed by 1 degree Celsius, countries need to be at zero emissions globally by 2050.

Leah Stokes, assistant professor of environmental politics at the University of California at Santa Barbara, tells Bustle that, ideally, the United States needs to be at zero emissions before 2050 so that other undeveloped countries have more time to build up their own infrastructure.

Stokes says that while the candidates' plans for meeting the IPCC's target are ambitious and difficult, "we have to do it if we want to maintain a stable climate."

"You can already see the devastating impacts of one degrees warming for the Bahamas with Hurricane Dorian, for California with forest fires killing people, destroying property," she says.

In addition to talking about climate mitigation, which refers to efforts to reduce emissions, Stokes says a few other concepts will likely come up when candidates explain their positions at the CNN town hall. She mentions climate adaptation, which is "how do we make our societies safer given that we have already warmed the planet by one degree Celsius," Stokes says.

She thinks the candidates will also discuss negative emissions, which refers to processes that allow us to actually remove carbon from the air. The IPCC and other scientists say those processes would be be necessary to stay within that 1.5-degree Celsius target. "That is a pretty technical idea, but it's also really central to what we need to be talking about," Stokes says, "and most candidates are not talking about it."

Here are other key terms and policies the candidates reference in their plans that are likely to come up during the town hall.

Clean Power Plan: This was an Obama administration policy that "set the first-ever limits on carbon pollution from U.S. power plants, the largest source of the pollution in the country that’s driving dangerous climate change," according to the Natural Resources Defense Council. Sen. Elizabeth Warren, author Marianne Williamson, and Sen. Amy Klobuchar all propose bringing the plan back.

Climate justice/environmental discrimination: Climate justice refers to the idea that marginalized communities in developing nations or low-income areas often feel the impacts of climate change first and the most. Environmental discrimination refers to the fact that pollution-producing factories, dumps, and toxic waste are often nearest to communities of color.

Sen. Kamala Harris focuses on these communities in her proposal for a Climate Equity Act. Sen. Bernie Sanders, Warren, billionaire Tom Steyer, and Williamson also center both of these concepts in their plans, according to CBS News. Former Housing and Urban Development Secretary Julián Castro also specifically mentions the Flint, Michigan water crisis as an example of environmental discrimination.

Climate X Option: Bennet's plan includes what he calls the "Climate X Option," which would "require power providers to offer zero-emission energy to every household and business, and provide more opportunities for Americans to choose clean vehicles and other technologies."

Fracking: Fracking is a form of fossil fuel extraction where machines break up the ground and extract natural gas or oil. That process "likely leads to a lot of methane escaping and basically going into the atmosphere rather than going into your [power] plant," Stokes says, and methane is a very potent greenhouse gas. Many of the candidates plans propose banning all fracking operations.

Green jobs/clean energy jobs: All of the candidates propose investing more in innovation and creating new green energy technologies. Stokes says creating those technologies would generate a lot of manufacturing jobs across the United States. These "green jobs," or clean energy jobs, would help the country create the infrastructure it needs to reduce its greenhouse gas emissions as fast as possible.

Stokes thinks that's important, because the deal sees climate "as an opportunity for economic growth and creating new jobs." She says that when climate change is framed in terms of the costs, environmental policies to address it are less popular.

"But I have research that shows, if you talk about the benefits, we talked about job creation, and air quality improvements, that can really bring more people to the table," she says.

Nuclear energy: Nuclear power provides 55% of the country's clean electricity, Stokes says. This is important because a few of the plans touch on nuclear power and fears about the safety of nuclear plans. Stokes says that unsafe nuclear power plants should obviously be shut down, but that shutting down safe plants that aren't putting carbon into the air is a problem. Sanders said in his plan that he would not give new licenses to keep safe nuclear plants open. "That's a pretty problematic position from an emissions perspective because nuclear does not emit carbon," Stokes says. "And when places shut down nuclear, like California, Vermont or Germany, their emissions tend to go up."

OFF Fossil Fuels Act: Rep. Tulsi Gabbard introduced this act in 2017, and it is so far the only climate-specific policy the presidential candidate has released, according to CBS News. In 2018, when the bill gained more cosponsors in Congress, Gabbard said in a press release, "Building on progress made in Hawai'i and other states, this legislation will put the United States on a pathway to replace fossil fuels with 100 percent clean energy generation and use by 2035."

Paris climate agreement: This historic pact, also referred to as the Paris climate accord or the Paris agreement, was entered into by 196 countries in December 2015. They agreed to invest in and use green energy, reduce greenhouse gas emissions, and work to limit the rise of global temperatures. Despite pushback from scientists, people in his administration, and leaders in other countries, Trump announced in June 2017 that the United States would pull out of the accord.

Pollution fee/carbon fee/carbon tax: A few of the candidates propose different ways to incentivize companies to reduce their emissions, and to punish them when they don't. Kamala Harris proposes a pollution fee in her plan, which would fine companies that violate federal pollution laws, according to CNN. The revenue from those fees would help to pay for other parts of the plan.

Sen. Cory Booker's and former Rep. John Delaney's plans both include a carbon fee and dividend program, which will impose a fee on carbon-emitting fuels, with the revenue being paid back to the American people through dividends.

A clean energy economy, which former Vice President Joe Biden refers to in his plan, is one that invests in clean energy technologies and aims to reduce carbon emissions, creating millions of jobs in the process. Sen. Elizabeth Warren also says we need to transition to a "green economy" in her plan.

Soil carbon sequestration: This is an example of the negative emissions processes Stokes mentioned. Soil carbon sequestration is a process where carbon dioxide is removed from the air and stored underground, in the soil carbon pool. Buttigieg proposes investing more in this technology, which his plan says would also help Americans in rural areas be involved in efforts to mitigate climate change.

Stokes says there's so much work to be done "when we talk about meeting these really ambitious timelines that's [going to] require all hands on deck," and that's reflected in the candidates' plans. In order to decarbonize our electricity and transportation systems, Stokes estimates we have to rebuild the entire electricity system almost twice in the next 10 to 15 years (building our current system took 120 years). Tackling that challenge is a tall order, and scientists say we don't have much of a choice. But should one of the Democratic candidates win the 2020 election, "there'll be tons of jobs for people to change the system," according to Stokes.