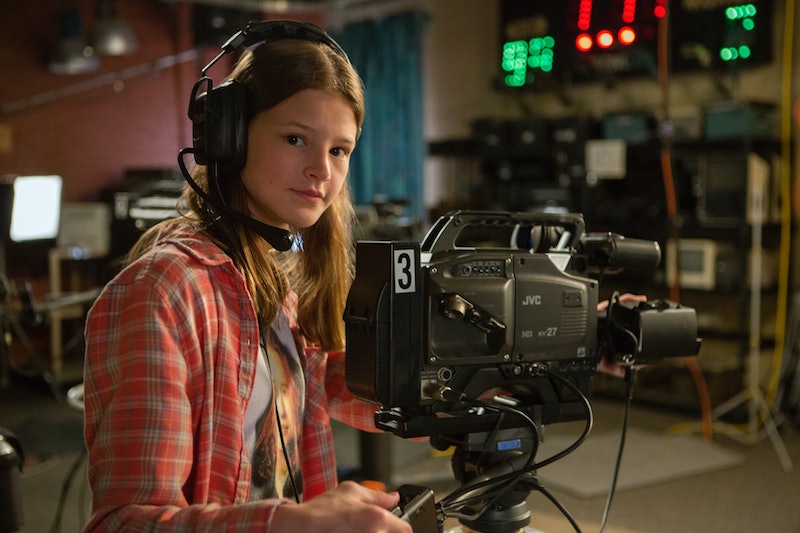 Well, this news sucks for fans of quality teen shows. According to The Hollywood Reporter, Netflix has canceled Everything Sucks. The '90s set teen drama has become the latest streaming show to be axed by Netflix after a single season, but unlike Disjointed, The Gypsy, or Girlboss, Everything Sucks! was notable for its positive representation of a young lesbian's coming out journey. This makes the loss of the show a major one for its small, but loyal fanbase.

Netflix doesn't release viewer statistics for its shows, so it's unclear exactly how many people watched Everything Sucks 10-episode first season. In terms of buzz, the series didn't generate the level of chatter of the '80s set Stranger Things or prestige drama The Crown. However, it did offer younger viewers a show that tackled the topics of sexuality and coming of age in a meaningful way. It also scored an impressive 89 percent score among viewers on Rotten Tomatoes.

Everything Sucks wasn't the first show to feature a young lesbian as a lead character, but its portrayal of Peyton Kennedy's Kate and Sydney Sweeney's Emaline's budding romance stood out as an honest and raw look at two young women discovering their sexuality. The show allowed Kate to go from a timid young woman who hoped a boyfriend would alleviate some of the negative attention she was receiving at school to a someone who became comfortable enough to embrace the fact that she liked girls. Emaline underwent a transformation of her own, as she moved away from bullying Kate to realizing just how much she had in common with her younger classmate. By the end of the season, the girls seemed to be on their way to becoming a couple after sharing a dance at school. Sadly, fans of the duo won't get to see what happens next for the characters.

In a March interview with BuzzFeed, Kennedy discussed why her show was such an important part of the TV landscape. She said,

"The entire show defies stereotypes. There's so little representation in regular mainstream media that it's incredible to be able to convey so much in one show. There's barely any representation for girlfriends in high school. There's a bit of representation in older generations, but I think for the teens who are watching it who identify with these characters, they will be able to feel comfort and hopefully acceptance at the end of the show."

Everything Sucks was also notable for putting a young, black male character at its core. Jahi Di'Allo Winston's Luke is a teen who's in touch with his feelings, loves to be creative, and is trying to deal with the fact that his father is no longer a part of his life. He's a dynamic character, and one who is allowed to let his insecurities about life, love, and growing up show.

Winston understood just how unique his role was, and he opened up to BuzzFeed about why he felt Luke was such a special character. He explained,

"Society won't talk about insecurities within young boys enough. Boys are supposed to be big and tough … but it’s a little bit of an insecurity for him. Like, 'You need me, I need you, I don’t know how I'm going to go on to some other girl without you.'"

The show wasn't perfect — its supporting characters tended to be one-dimensional at times — but that doesn't take away from the fact that it was adding something valuable to the teen TV landscape. And there's no doubt that the show's amazing, layered LGBTQ+ characters will be missed. Netflix no doubt had their reasons for canceling the series, but it's still a blow for representation and authentic teen stories.

More like this
17 Photos Of The 'Wednesday' Cast Vs. The 1991 'Addams Family' Cast
By Grace Wehniainen
The First Trailer For 'That '90s Show' Includes So Many Nods To The Original Series
By Jack Irvin, Alyssa Lapid and Grace Wehniainen
The 'Firefly Lane' Book Ending Teases Way More Tears To Come In 2023
By K.W. Colyard
Everything To Know About 'Firefly Lane' Season 2 Part 2
By Gretchen Smail
Get Even More From Bustle — Sign Up For The Newsletter